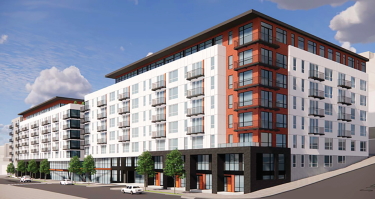 Rendering by Studio 19 Architects [enlarge]
In Tacoma, construction will start this year on the newly purchased site.

Rendering by Clark Barnes [enlarge]
In Lynnwood, no start date has been announced; and the old strip mall to be redeveloped still has tenants.

Pierce County recorded the $7 million land sale last week at 1502 Fawcett Ave. The vacant property occupies nearly a full half block, or about 1.35 acres, at the corner of South 15th Street. That's in the city's downtown center, a little west and uphill from Tacoma Art Museum and the convention center. It's a little north of the Brewery District, too, and will eventually be served by light rail. It's also walkable to the streetcar and UW Tacoma campus.

The seller, Vision Deuce LLC, had owned the property for at least two decades. Its past use is unclear. First Western Properties had previously offered it as a ground lease. Broker representation is unknown. The deal was worth about $119 per square foot.

Trent hopes to break ground on the $105 million project this year, with completion in 2023. Rush Construction will build the apartments, and Blanton Turner will manage them.

Trent's Patrick Ashman said in a statement, “We are really excited to unveil this project The site has been vacant for many years and we aim to model civic-centric development that provides rent attainable, quality apartment housing within walking distance to downtown Tacoma and major employers.”

Rents will be affordable to those earning 80-120% of area median income. The buildings will have 268 underground parking stalls, about 8,600 square feet of amenity space — with co-work space, Top Golf Swing Suite, fitness center, bike room and a tenant lounge with a 30-foot bar. Two roof decks will have about 5,000 square feet.

No commercial space is planned. Trent Mummery said, “Business and neighborhood leaders have been working for years to keep the business districts vibrant and authentic. With that in mind, we do not want to add competing retail, we want to support what is original and existing.”

Last month the firm paid $8.7 million for the full-block West Coast Printing property, near Seattle Goodwill, where Studio19 Architects has designed a midrise project with 206 units. Construction is expected to start this summer on the former Seattle Curtain property, near Yesler Terrace. Now dubbed Tapestry, that'll yield around 280 units.

Trent and related firm Opportunity Zone Advisors have five other projects planned in federally tax favored Opportunity Zones. Those are in Bellingham, Everett, Lynnwood and SeaTac.

Hatteras Sky, of Atlanta, last summer announced its partnership in the Tapestry project. And, with Cresset Diversified Real Estate Capital, it separately announced last month a partnership in the West Coast Printing and Lynnwood projects. Cresset Diversified is a Chicago-based specialist in Opportunity Zone funding. Jake Leibsohn and Ron Peterson of NorthMarq arranged $70 million in equity for that pair of projects.

The Lynwood site, near the future light rail station (slated to open in 2024), sold at the very end of December for just under $7 million, according to the broker. Snohomish County hasn't yet recorded the sale. First Western's Tim Weber represented the longtime former owner.

Trent's plan at 19820 40th Ave. W. should yield about 359 units. That corner retail property, now with about 2.5 acres, will be reduced in size by the city's planned new streets in its City Center makeover near the light rail station. Trent's apartment project, worth about $110 million, doesn't yet have a start date. Clark Barnes is designing the two L-shaped midrise buildings.