On the Block: A different kind of church redevelopment in Ballard

Seattle is at the age, and our churches are at the age, when most all of those century-old, unreinforced masonry structures are being razed and redeveloped. Congregations keep shrinking and aging; the cost of building upkeep is too high; and churches often occupy prime real estate in the established neighborhoods where people most want to live, gather, shop and eat — but not to worship.

Church photo by Brian Miller [enlarge]
The old red shingled church may not see its 100th anniversary, but the congregation will remain in place.

So the fate of St. Luke's Episcopal Church in Ballard is both typical and not. Typical, in that its over 1-acre property at 5710 22nd Ave. N.W., immediately east of Ballard Commons Park and north of the library, appears bound for redevelopment. Not, in that the church isn't simply pulling up stakes and selling to the highest bidder — as many other congregations have done. (I'll leave that depressing list to a final footnote.)

Instead, the church and its principal advisor, Heartland, have put out a request for qualifications to help the church redevelop with a mixed-use, mixed-income community where the church will remain — only not in its old buildings. Heartland's Chris Fiori and Evan Schneider are leading the project. Also advising the church are Jen Creighton and Scott Lee of Interbay Alliance, and attorneys at Hillis Clark Martin & Peterson.

The church had been contemplating the plan since at least 2013 — when it was presented at a Ballard District Council meeting, according to MyBallard.com. St. Luke's put that notion on hold to wait for the Mandatory Housing Affordability upzone, then restarted the process a few years ago.

The basic new outline will likely be a ground lease and condominium arrangement in which the Episcopal Diocese of Olympia would own about 15,000 square feet in a new midrise building, plus ownership or the right to use about 50 underground parking stalls, mostly on Sundays. St. Luke's in-house architect, parishioner Christopher Mosier, envisions the flexible church space as a mix offices, sanctuary, gathering hall, etc.

St. Luke's also now operates a pea patch, with bees, and what it calls the Edible Hope Kitchen. That remains open during the pandemic to serve the large population of homeless folks living around the park and library.

Phase I of the redevelopment will be the larger property on the west end of the block, bounded by Northwest 57th and 58th streets. That has about 40,000 square feet. Structures including the original 1923 wood-frame church, with its distinctive red shingles, would be removed. St. Luke's has nine buildings on the entire site, including a few old houses.

That west site is zoned up to 75 feet, and would presumably be most attractive to a market-rate developer. Per city Mandatory Housing Affordability requirements, there would have to be some affordable units included, or an MHA payment. Heartland's appraiser values the land at around $17 million.

Heartland says, based on estimates by Mithun, that a seven-story building might yield about 230 units. Those numbers could go up, since the city is now contemplating a zoning change that would allow greater residential density for affordable housing on properties owned by religious organizations. (The state passed a similar measure in 2019.) Two levels of underground parking might have about 177 stalls.

Phase II, with its RFQ to follow this spring, will be the smaller 15,000-square-feet midblock property on 58th, east of the main site, where entirely affordable housing is the goal. That site has MR (M1) zoning, which would also allow a midrise building. About 75 units are possible under current zoning, probably with no parking. 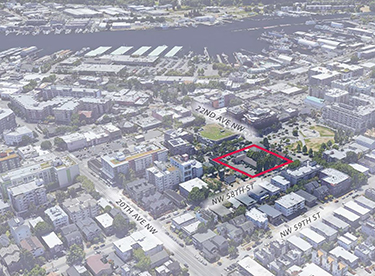 Aerial view by Heartland [enlarge]
The church and its principal advisor, Heartland, have put out a request for qualifications to help redevelop the site with a mixed-use, mixed-income community where the church will remain — only not in its old buildings.

Heartland thinks that the federal low-income tax credit program (LIHTC) will probably figure in a Phase II developer's scheme. Phase II may also benefit from the possible city zoning change for religious organizations, per above.

Public funds would also be likely be included, says Fiori of Heartland. Rents could start at a level affordable for those making 30% of area median income. The Phase II offering will have a fixed price, unlike Phase I, to help prospective nonprofit developers line up their financing. The two phases will then proceed “more or less in parallel during the permit process.”

Fiori says that he and Heartland have past experience in advising mission-driven nonprofits. “We've done some things similar.” But St. Luke's is the first church to approach the firm for advice on balancing mission, “a strong mandate for affordable housing” and the need for stable ongoing future income.

How will a ground lease and/or condominium fit together? “We're going to be flexible.” For the coming Phase I and II RFPs, “We'd like to have both signed by the end of the year.” Heartland's schedule for the Phase I RFQ is to have responses by Feb. 24. Interested developers would then submit their proposals by late spring.

Rev. Britt Olson of St. Luke's expects that the church will move operations during the construction hiatus of two or three years — ideally sharing space with another Ballard or North Seattle congregation. The ideal timeline would be to return to the new Phase I building in 2025.

Olson says that, unlike other churches selling under duress, “There really isn't really any crisis. We have been growing as a congregation since I arrived.” That was 2015, when estimates that Sunday service attendance had then dwindled to about 15. Historically, it probably peaked in the 1980s, with up to 400 attending.

Pre-pandemic, the number had stabilized to 50 to 75 attendees. Services are now virtual. “It's had dramatic ebbs and flows,” she says. But critically, “When I started, the congregation was older. Our average age today is under 40.” That speaks to Ballard's demographic changes from the 1980s to the present day.

The little old chapel isn't falling apart, either. “The timber is phenomenal,” says Olson. That'll likely be salvaged before construction. The cedar cladding speaks to Ballard's history as the shingle capital of the world. Even so, maintenance costs aren't cheap; and the building isn't ADA-complaint. Fortunately, says Olson, the congregation is less attached to the building than the church's overall mission.

The church's flexible multipurpose space in the Phase I building will include a kitchen for church and community events. Edible Hope Kitchen will look for a separate, permanent new home, preferably closer to other services.

“We're looking at a 100-year-plus timeframe,” says Olson, with stable income from a ground lease. The goal is simply “a facility that works better for us,” as befits what she calls “our humble, modest identity.”

The most famous example of leveraging real estate for religious mission is probably Trinity Church in lower Manhattan, which has profitably ground leased much of its colonial-era land for Wall Street skyscrapers. Olson says that Trinity has been both an advisor and exemplar for St. Luke's

“It's a national trend,” says Olson. When it comes to the older, established mainline denominations, “Most churches are land-rich and cash- and people-poor.”

Says Fiori, “This is a growth story for them.”