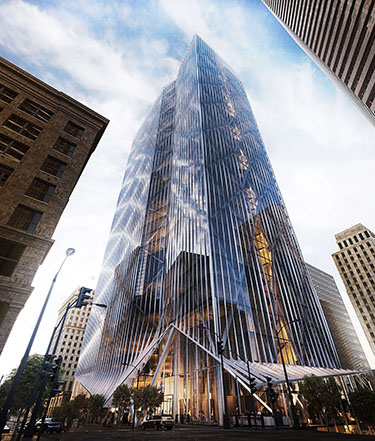 Renderings by NBBJ [enlarge][gallery]
The Net will replace two old buildings and the skybridge connecting to the Metropolitan Grill half block, on Second. 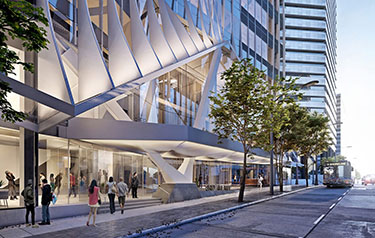 Urban Visions' planned 36-story office tower, dubbed The Net, is moving closer to a start date. Crews from general contractor Lease Crutcher Lewis have fenced off the half block at 801 Third Ave., and the project has its demolition and master use permits in place. Lewis also recently opened its construction office on the west side of the block, in a vacant former bank — aka the old Vision Quest gym — on Second Avenue.

NBBJ designed the tower, with its offset core and distinctive steel exoskeleton, which will have 783,585 square feet of offices. Jim Allison and Lisa Stewart of JLL are brokering the space, Smith said last fall. He also said that The Net would move above ground once some tenants were signed. The new marketing website says the target date for completion is the fourth quarter of 2023. The Net intends to achieve WELL Building Gold and LEED Gold certification.

The Net will also have about 11,937 square feet of ground-floor retail, cafe and public hang-out space. Six levels of underground parking for 387 vehicles will be accessed from the alley to the west.

JLL said after the September sale that its Gerry Rohm and Logan Greer arranged the deal.

To be demolished are the old Seattle Metropolitan Credit Union building and Marion Court building — the latter once home to home to several restaurants including Cafe Pho.