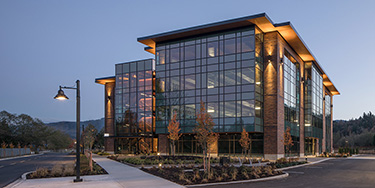 Photo by Lara Swimmer [enlarge]
Issaquah is the co-op’s first satellite office; others will follow.

REI has a new home, sort of. The co-op said on Wednesday that it will lease all of Rowley Properties' new office building at 2005 N.W. Poplar Way in Issaquah as a satellite location. Terms were not disclosed. The announcement came after its shocking decision last year — prompted by the pandemic — to sell its unoccupied new headquarters in the Spring District, and to adopt a more distributed approach to its office needs.

Facebook subsequently claimed that 400,000-square-foot Bellevue complex for nearly $368 million. REI then sold its old HQ in Kent for over $24 million to Bridge Development Partners, which plans to redevelop.

REI's Chris Putur said in a statement, “We believe the future of work is much more fluid. We're building the future around the work that needs to get done, and creating flexible, agile and inclusive ways to deliver innovation for our customers — and we no longer believe we need a traditional office model to do so.”

Like many employers during the pandemic, REI has had a work-from-home policy for its office staff. That practice will continue on a flexible basis, the company said, with employees spending up to five days a week in WFH mode.

Other satellite locations will follow, but REI hasn't specified how many. Its brokers were Matt Anderson and Doug Larson of Heartland, who also represented the co-op in last year's sales.

Rowley had been marketing its four-story building as 2005 Poplar. It has about 68,876 square feet. The speculative project, designed by VIA Architecture and built by GLY, makes extensive use of mass timber — and has other green features that would naturally appeal to REI. Those include a Dedicated Outdoor Air System, or DOAS, which continuously circulates 100% fresh outside air via the HVAC system.

The project was completed late last fall after about a year of construction. Rowley's Mitch Tallman and Kelly Richardson were leasing 2005 Poplar. It's on the south side of Interstate 90, a little west of Newport, and a 20-minute walk south to the Issaquah Transit Center.

REI estimates that up to 400 employees could use 2005 Poplar at a given time, post-pandemic. In the meantime and beyond, REI describes what's increasingly called “hoteling” — reserving a desk when you plan to visit the office. Locally, REI has around 1,400 non-retail employees, some of whom were in leased space in Georgetown and Eastgate, pre-pandemic.

The company said, “While some essential on-site roles will require physical office space, most employees will have much more flexibility in where and how they log in for work. Instead of dedicated workspaces, each employee can choose the combination of locations that best suit their role, work and team on a given day — including satellite offices, coffee shops, home offices or even local parks.”

Rowley, led by Kari Rowley Magill, is a third-generation family business. The company acquired about 640 acres in 1954, becoming Issaquah's largest landowner. Some land has since been sold to other developers.