33-story Bellevue tower drops the hotel rooms, will have 274 condos instead 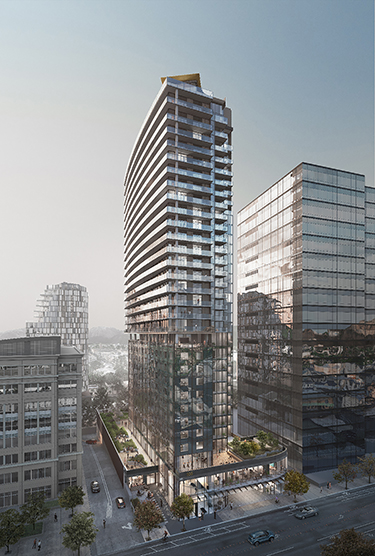 Renderings by VIA Architecture [enlarge]
Pre-sales haven’t yet begun for the planned condominiums.

On three downtown Bellevue properties it owns, Fana Group has a trio of projects planned: an office tower on the Washington Square block; two office towers north of Soma Towers; and what was originally announced as condo/hotel project on the east side of that block, at 305 108th Ave. N.E.

The latter, now dubbed ParqHouse, recently received a SEPA determination of non-significance from the city. The appeal period ends March 18. Past working names have included Fana 305 and Plaza 305.

Hotel rooms have now been dropped from the ParqHouse plan, which is unsurprising given the pandemic's toll on the hospitality industry. The appetite for high-rise condominiums in Bellevue may be a little stronger than in Seattle, but future pricing will have to factor in nearly a half-dozen other rival downtown condo projects.

The 33-story tower, designed by VIA Architecture, has passed through design review. It'll replace a two-story office building from 1979, now or recently home to First Strike Games and the brokerage Compass. VIA lists the height at 345 feet.

The residential marketing website now lists JTM as the contractor, and CKC as the structural engineer. Navix Engineering is also indicated in city records, along with Hart Crowser and AESI. Update: Communita Atelier is the landscape architect.

Prices aren't mentioned; nor does a broker appear to be attached to ParqHouse. A certain number of pre-sales would typically be required before a construction loan and groundbreaking. Construction is expected to take over two years.

The 34,335-square-foot site is wedged between Civica Office Commons and Tower 333, the latter leased to Amazon. It's also about an eight-minute walk west to Downtown Bellevue Station, where light rail service will begin in 2023. Fana acquired the site in 2014 for about $13.5 million.

Four levels of underground parking with 337 stalls will be accessed from 108th (there are no access alleys), making the garage entry the mouth of the building — with a bike lane to cross. A third floor terrace will overlook 108th, and second floor terraces will face south and west. No commercial space is planned.

Some units on the upper levels will have private terraces. The 33rd appears to be owner amenity space, with a deck. The 32nd floor is currently indicated as a single penthouse with about 3,566 square feet.

About 19 units will be affordable, with around 500 to 600 square feet each. A Regional Coalition for Housing, or ARCH, is consulting on those.

VIA lists the size above grade at 205,849 square feet. The bike parking will have 28 stalls. A 1,500-square-foot plaza will face 108th, and some kind of public art is also planned.

Fana's rivals in Bellevue's new-construction condo market include Fortress Development's Avenue Bellevue (now under construction, where prices start at over $900,000); two planned projects from Bosa Development (its completed One88 had units running from the low $800,000s to $5 million); Create World's Altaire, where prices haven't been set; and a few smaller boutique projects.