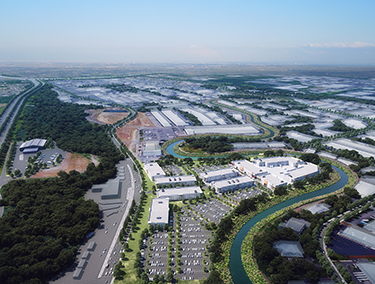 Images from Ryan Cos. [enlarge]
The Prato District is roughly between the Green River and Interstate 5, south of Westfield Southcenter mall. 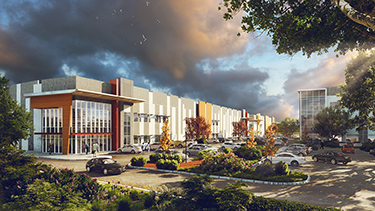 [enlarge]
Ryan Cos. is negotiating a lease for a technology park that could have buildings similar to this one.

Back in 2009, Segale Properties inked a long-term deal with the city of Tukwila to develop 512 acres called Tukwila South , bordered by Interstate 5 on the west, the Green River on the east, South 204th Street on the south and South 180th Street on the north. As part of that deal, the city in 2012 built a 1.4-mile extension of Southcenter Parkway that runs through that land.

Now Segale is rebranding 320 acres of that as The Prato District, which could include a mix of multifamily, office, flex-tech, retail, light-manufacturing and other uses. Segale says 250 acres of the land are shovel ready and offer a streamlined development path because all key entitlements and core infrastructure improvements have been finished to support up to 10.3 million square feet of projects.

Some of the original acreage was pared for wetland mitigation, and Segale in 2015 sold its 75-acre, 12-building Segale Business Park to Clarion Partners in a $203 million deal.

Mark Segale, president of Segale Properties, said no buildings were developed when the project was called Tukwila South because his family wanted to take its time to get the infrastructure in place and pads ready to build. His company paid for all the infrastructure except the extension of Southcenter Parkway. He declined to say how much that cost.

“We'll wait and get it right to create something special,” he said. “My father Mario had a vision here and it's our job to see it through.”

The available parcels in the district are vacant with graded ground. Segale said his company is flexible and can accommodate different users and their needs, with some “phenomenal” parcels available for corporate campuses. “We have the ability to create something very special,” he said.

Segale envisions long-term ground leases for the properties in the district, keeping the land in the family.

“Our family has spent the past 70 years assembling land, and the past two decades planning, gaining entitlements and constructing core infrastructure for The Prato District,” Segale said in a news release. “Our family's vision will create an exciting new live-work-play environment bringing high-quality development, open space, and economic vitality to the Tukwila area.”

Yesterday's unveiling of The Prato District included an announcement that Ryan Cos. is negotiating for 38 acres in it to develop a technology park. Ryan is the same Minneapolis-based developer and co-owner of the apartment project at the Kirkland Urban development and is rehabbing the old Farmers Insurance headquarters on Mercer Island.

Ryan vice president Marc Gearhart told the DJC his company has not defined the program for the Tukwila site, however it is “working on a couple potential build-to-suit requirements.”

“Ryan Companies was attracted to the vision and scale The Prato District offers, not to mention the fact that infrastructure and approvals are already in place. Instead of spending 18 to 24 months just to get land entitled and permitted, we can start building tomorrow — that speed-to-market gives us an extraordinary advantage over other developers,” Gearhart said in the news release.

The news release says The Prato District won't be all work and no play — there will be over 18 acres of future parks and maintained walking trails, along with 71 acres of conserved open space and views of Mount Rainier and the Green River. The district is also a short walk to retail and restaurants, and a little longer walk to Westfield Southcenter mall.

The release also points out that the district is within minutes of Sea-Tac International Airport, Link light rail stations, Sounder commuter rail, state Route 167, Metro bus routes and regional job centers. It says the district is central to more than 100,000 skilled workers and nearly 5,000 businesses.

“We think it's time to see our vision come together,” Segale said. “I don't think there's a place in the Puget Sound area where (development) could be done any quicker.”

Heartland is serving as Segale's real estate consultant and broker.

Segale said the name Prato comes from an important capital city in Tuscany, where his grandparents came from.