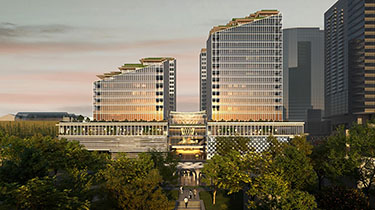 Renderings © KPF and Mithun 2021 [enlarge] [gallery]
The four towers, over a retail podium and atrium, will have hotel rooms and residential units. A skybridge will also connnect east to Lincoln Square. 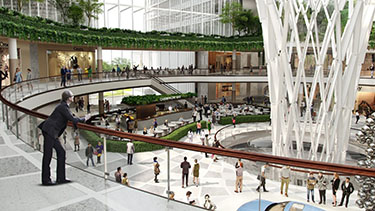 Now, with new architects KPF and Mithun, Kemper has filed a plan at 401 Bellevue Way N.E. for four towers of varying heights — the tallest having 25 stories. The quartet will have 234 residences, 157 hotel rooms and retail. Size above grade is estimated at about 1 million square feet, which includes about 265,795 square feet of retail, commercial and restaurant space.

The project is now dubbed The Bellevue, and will be part of Kemper's overall Bellevue Collection portfolio. KPF is the modern moniker for Kohn Pedersen Fox, of New York.

The corner, at Northeast Fourth Street, faces south to Downtown Park and east to the Lincoln Square expansion (also by Kemper), aka Lincoln Square South. It's also a short walk to Bellevue Downtown Station, where light rail service will begin in 2023 or sooner.

The four towers will share a three-story podium, and will top out in a range from about 308 feet to 169 feet in height. All four will have dramatically angled rooflines, something like Barnett Newman's “Broken Obelisk” sculpture in Red Square at the University of Washington. Those rooftops will then be studded with terraces and landscaping.

Perhaps because of the irregular rooflines, the number of stories in each tower isn't precisely stated by the architects. Including the podium, they look to range between 11 and 25 stories.

The towers will also overlook surround a central atrium/retail area various called a conservatory or “grand room.” The atrium's glass roof will feature with a descending, funnel-like concavity dubbed the “art canopy.”

Above the retail podium and closer to the park, the two south towers will be entirely residential. The northwest tower will also be residential; and the northeast tower will combine residential and hotel rooms. The hotel will have about 198,775 square feet, plus a spa with 27,810 square feet.

A public plaza with about 3,200 square feet, plus public art, will face east to Bellevue Way. A parking drop-off circle, beneath the atrium, will be accessed from Fourth. Over 1,600 parking stalls are planned, on six underground levels, to replace about 500 stalls there now.

The Bellevue will include a skybridge connecting east to the Lincoln Square expansion. The latter — with offices, apartments and a W Hotel — was completed in 2016 by GLY. The master plan for both expansion projects was by Sclater Partners and HKS of Los Angeles.

Kemper added over an acre to the west corner site in late 2018 with a $17.5 million purchase. That followed another buy in 2013 for $3 million, on top of what the company already owned near the corner. All the small old retail structures have been removed. The corner now totals about 3.6 acres. The old master development plan had envisioned two towers on the corner; that's now changed to four.

Kemper's website for The Bellevue calls it “a new luxury moment,” and describes a five-star hotel, brand unknown. Whether the 234 luxury residences will be rentals or condos — or a combination of both — remains to be seen.

No start date has been announced for the project; and it's unclear if GLY is still attached as the contractor. Kemper didn't respond before deadline to a DJC request for further details.

Kemper says the expansion will add about 500,000 square feet to the Bellevue Collection, which would then reach about 6 million square feet. Those numbers don't quite agree with the KPF-Mithun figures. Regardless, the expansion will further reshape Bellevue at a time when Amazon, light rail and a half-dozen new office towers are utterly transforming downtown.