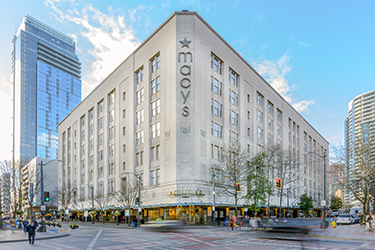 Photo provided by Eastdil Secured [enlarge]
The building will have 85,000 square feet of renovated retail space.

The seller was Starwood Capital Group, they said.

A source close to the deal said the sales price was approximately $580 million.

The 770,000-square-foot, eight-story mixed-use building is on a city block between Third and Fourth avenues in the retail core.

In press materials, URG and KKR said they plan to renovate 85,000 square feet at the ground level, mezzanine and part of second floor to accommodate flagship retail stores and a create new Fourth Avenue entrance to access the 682,000 square feet of commercial office space now fully leased to a single tenant. The renovation was started by Starwood.

The DJC previously reported that Amazon is the building's office tenant.

The buyers said the retail space above the underground Westlake Light Rail Station will be named The Bon Marche Collective in honor of the building's history. It will offer retail suites for lease from about 3,000 square feet to 16,600 square feet with additional potential for a ground-floor grand food hall. Victrola Coffee will remain on Third Avenue, at the building's southwest corner.

Maria Royer at Real Retail is the leasing agent for the Collective.

“Transforming this building and adding energy to the street level is an investment that will be catalytic to downtown's recovery,” said Jon Scholes, president and CEO of the Downtown Seattle Association, in the press materials.

Originally home to Seattle's Bon Marche department store, the art-deco style building was constructed in 1929 with four additional stories added in 1955. The Bon sold in 1992 to Federated Department Stores of Cincinnati. The Bon name was gradually phased out by 2005. Federated later renamed itself Macy's.

Urban Renaissance Group CEO Patrick Callahan said the building was constructed as a monument to Seattle's retail strength in the Pacific Northwest and remains a symbol of the city's strength and resilience.

“We're thrilled about this transaction with KKR and excited about the future of this building,” he said. “This acquisition reflects our mutual confidence in the region and specifically in downtown Seattle, where we look forward to strengthening the heart of Seattle's retail core.”

Between 2015 and 2017, Starwood Capital Group spent $115 million to buy the upper six floors of 300 Pine St from Macy's, then invested more to convert them to office space and do other renovation work. CallisonRTKL was the architect. In early 2020, Macy's sold the remaining bottom floors to Starwood for $68.7 million.

The renovated building has a 20,000-square-foot rooftop deck and 15-foot-tall ceilings with ornate colonnades and dramatic architectural features that originate from the 1920s-era department stores. The office portion has 80,000-square-foot floorplates, seismic retrofitting, and over 20 skylights.

Eastdil Secured represented Starwood, and advised KKR and URG on the financing for the 300 Pine St acquisition.

Justin Pattner, KKR's head of real estate equity in the Americas, said this is KKR's fourth investment in the Puget Sound region. “This is an attractive market poised for long-term growth driven by its strong and growing workforce, attractive cost of living, and simply being a highly desirable place to live with a great quality of life,” Pattner said.

KKR said that since entering the Seattle market less than a year and a half ago, it has completed several transactions with URG totaling more than 2 million square feet. They are:

• Tower 333, a 20-story office tower, also in Bellevue's CBD, and fully leased to a single tenant.