Our city, our time

The pandemic, that has forced most of us into a stay-at-home/work-from-home life for the past year, has also given us cause to reexamine many aspects of our lives — our home, our work, our surroundings, our relationships, our true source of happiness and what is most meaningful and important to us.

Nestled among these broader questions are two additional aspects worthy of closer exploration: the way we value and use our time; and the rediscovery of our immediate and surrounding neighborhoods.

Just ask somebody to take on another task or, conversely, suggest they do something to give themselves a break or a moment of respite, and you’ll likely get a response that goes something like this:

“I wish I could find the time.”

Ah yes, time. It’s what we all want. We can’t get enough of it. We can’t make more of it. And, how we manage it is a constant work-in-progress. In the big picture of things, it is our most valuable asset. 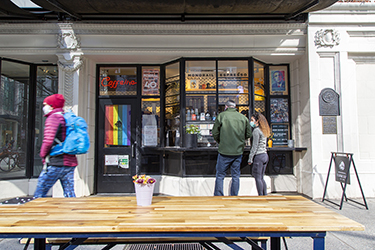 Recent times have forced us out of our existing routines and made us grapple with new formulas for managing our time. Work-from-home reduced our commute time, but we spent those gains by working longer. We saved time by not having to take our kids to school, but we spent more time in the classroom with them because our kitchen table became the classroom. We saved time running errands because we ordered most everything online, but that meant we were now spending additional time in front of the computer or on our phones.

Yet, being hunkered in has also created time for things that we had formerly sacrificed. Opportunities like more movie nights with the kids. Or tackling that redecorating project. Or taking up a new hobby. Or the joy of reading a book.

Or simply getting out of the house, and falling in love with our neighborhood, community or city all over again. Freedom from the pandemic has come in the form of going outside, walking the neighborhood, taking a short drive or visiting to the local park. Socially distanced, of course, we reconnected with the people, the shopkeepers and simplicity of what our local neighborhoods had to offer.

And we embraced the idea of “go local.”

For example, in April and May of 2020, people who said they were strongly involved in their communities increased by 10% in Italy, 9% in the U.S., U.K. and the Netherlands, and 6% in South Korea (Source: Glocalities, 2020). This involvement has encompassed everything from getting to know and helping neighbors to communal performances and street parties.

For some, cities are losing their appeal, but never has there been more room to push forward progressive ideas to create more livable, human-scaled communities. These ideas include the “15-minute city” (where most everything that you need is within a 15-minute distance), biophilia and all things natural, as well as new, active mobility opportunities.

The 15-minute city, also referred to as a “complete neighborhood,” is not a new idea. It builds on principles of New Urbanism and transit-oriented development, and it finds its roots in the idea of the “neighborhood unit” advanced by the American planner Clarence Perry in the early 1900s. Similar visions of 20- and 30-minute cities or neighborhoods have also emerged in the past decade, notably in Australia.

The 15-minute-city concept (la ville du quart d’heure) found new popularity in 2019 from Carlos Moreno, a French-Colombian professor who developed the idea in pursuit of amour des lieux or the “attachment to place.” The quest to improve quality of life doesn’t require a city to “wage a war against cars” or “build a Louvre every 15 minutes,” Moreno says. Rather, it needs to decentralize by adding more options for walking, cycling and public transit, and focusing on economic development in every corner of the city.

Mayor of Paris Anne Hidalgo quickly became one of the most prominent champions of the 15-minute city. The idea was a centerpiece of her successful 2020 reelection campaign, and it encapsulated the work that her administration has done since 2014 to promote walking and cycling, restrict cars and bring parks and people-first infrastructure to the City of Light. It now stands as her central policy framework to improve quality of life and help the city live up to the goals of the Paris Climate Agreement.

Ultimately, the aim is to make our cities more livable, equitable (widening access to jobs and services), sustainable (reducing emissions) and hospitable to small local businesses. 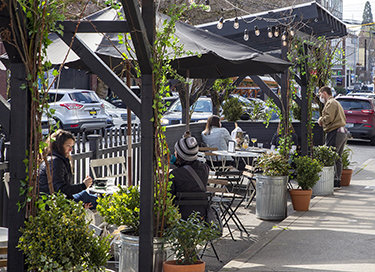 [enlarge]
“Streateries” have popped up everywhere in Seattle. Oddfellows Cafe + Bar offers all-day dining along with outdoor seating and protection from the elements on Capitol Hill.

You don’t have to look hard to find examples of how Seattle has successfully incorporated ideas that make the city more livable and help Seattleites make good use of their time.

In order to attract people back to downtown, we’ve seen an uptick in activation and programming of spaces, such as seasonal night markets, pop-up shops and beer gardens. Restaurants and bars took to the streets, literally, by taking over parking spaces, roads and sidewalks and setting up “streateries” for outside dining.

Another great example is the future Pike Pine Streetscape, a part of the Pike Pine Renaissance spearheaded by the Downtown Seattle Association. This new streetscape will provide a safe and vibrant pedestrian experience on Pike and Pine streets between Capitol Hill and Pike Place Market, with connections to the new waterfront.

In the area of recreation, the build-out of connected bike paths and design of new park amenities offer healthy ways for people to get around and enjoy the outdoors. And exciting new transit-oriented developments are taking hold both north and south of the city, as our light rail system continues to expand.

So, despite the many challenges that we all have had to face, one thing remains certain: Seattle and its surrounding communities are still great places to live, and they offer wonderful ways to spend our time.