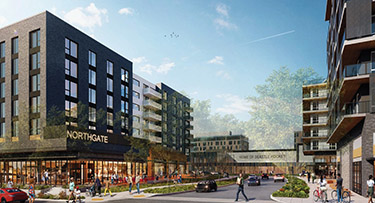 Rendering by GGLO [enlarge] [gallery]
Looking west on 106th, this view indicates how close the new Northgate Ice Centre will be to the apartments running along Fifth.

Many, many things are happening at Northgate, as light rail service nears and Simon Property Group continues the phased redevelopment of its 55-acre mall property. The city's planned bike and pedestrian bridge will soon have its final span craned into place over the freeway, to the west. Sound Transit trains can be seen moving back and forth for testing, and its Northgate Station is slated to open in October.

The central NHL Kraken practice arena, also to be for public use, is slated to open this fall. That's officially dubbed the Northgate Ice Centre. Two hotels are planned, along with new office buildings and new but less retail space. The north third of Simon's property, roughly where the Ram and Barnes & Noble are now, will be developed later in Phase II. And affordable housing is separately planned on the old Park & Ride lot, south of Northgate proper.

Oh, and Simon now calls the entire thing Northgate Station, too. Simon also recently added a Virginia Mason Franciscan Health clinic to its future roster of tenants. The publicly traded Simon, of Indianapolis, generally does its own retail leasing — though the office leasing may be farmed out.

Then, on the east side of Simon's property, there are the apartments — which could ultimately total about 1,200 units. The four planned mixed-use buildings of Phase I don't yet have official names or addresses along Fifth Avenue Northeast. Simon and GGLO recently updated their numbers for the middle pair, with the working names M2 and M3, which will be separated by a new hill climb in alignment with Northeast 105th Street.

They'll share parking, both underground and structured, with about 580 stalls — presumably for both tenants and shoppers. Some will have EV charging stations. Another dozen-odd surface stalls will be for short-term retail use. Tenant bike parking will total about 246 stalls.

The two buildings will be connected via a three-level skybridge above the hill climb. Both will have a certain number of townhouse units along Fifth. Overall, units will run from studios to three-bedrooms, in a range from about 480 to 1,300 square feet.

Total retail/commercial or restaurant space for the pair is about 29,000 square feet. That'll be mostly in bays facing west, to the meandering new Fourth Avenue Northeast, park and NHL facility.

Tentative phasing, after the garage pit is dug, is for M2 to go first, followed by M3. Together, they'll total about 680,000 square feet — including the parking and amenity space. Both buildings have been through design review, and final permits appear near. The master use permit for the entire mall redevelopment was issued a few years ago.

Site prep for the two buildings will be relatively simple, since they'll occupy ground previously used for surface parking. Much of that area is now being used for construction staging for BNBuilders, which is finishing up the three-rink Kraken practice facility, which will also include a Starbucks and the 32 Bar & Grill. That will be the first new building to open at Northgate Station.