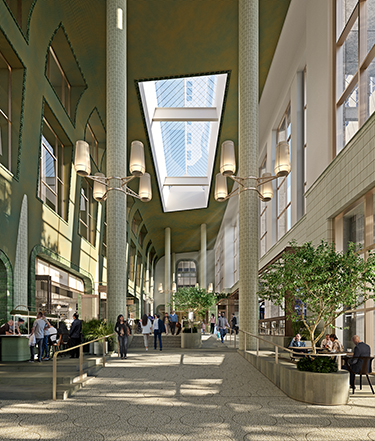 Renderings by SkB Architects [enlarge]
Do you feel like you’re in a Scandinavian train station? That’s the idea. 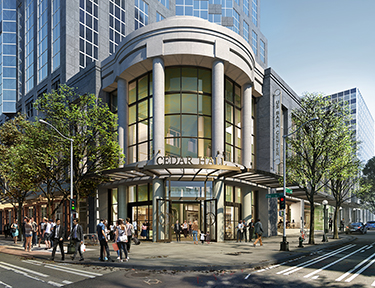 [enlarge]
The bottom three levels of the building will be known as Cedar Hall.

Two years ago, Blackstone entity EQ Office paid about $1.2 billion for downtown Seattle's 999 Third and U.S. Bank Centre office towers, which total about 1.9 million square feet. Future renovations to both were also announced at that time. Passersby have noticed since February the ongoing work at 1420 Fifth Ave., where Andersen Construction and SkB Architects are in charge of the makeover.

EQ Office calls it “the most significant repositioning project Seattle has seen to date.” Work should wrap up in early 2023. The company says, “What was previously a confusing ground floor will be replaced with a clear and inviting arrival experience that will engage guests the moment they enter with a series of hospitality driven spaces.”

Lisa Picard, who runs the firm's local office, said in a statement, “Our repositioning of USBC comes at a critical moment in the re-shaping of work and work places. I have always loved this building, its location, its presence, and bones and felt it deserved a new orientation, narrative and energy.”

EQ Office now calls the 46-story building USBC. Developed in 1989, it was originally known as Pacific First Centre. The lower retail levels, once home to Palomino and a multiplex, have also been known as City Centre. That's all changing as part of the rebranding. Kaiser Permanente and other tenants in the lower public levels have left.

When open, the bottom three levels will be known as Cedar Hall, and “will be home to national, regional, local retail and food and beverage partners, with an emphasis on homegrown, Seattle-born businesses,” says EQ Office. The lobby will have a makeover “inspired by Scandinavian train stations.” Local art will also go on display.

That space totals about 67,000 square feet. The Cedar Hall retail/commercial space is being brokered by Anne Marie Koehler of Newmark.

Kyle Gaffney of SkB said in a statement, “As a former tenant myself, I knew the building's challenges and saw its opportunities. By breaking its scale down to the pedestrian experience, introducing tactility, detail and a curated retail, we could enhance its role to support gathering and create a neighborhood destination for all.”

The tower has about 855,300 square feet of offices. That space is being brokered by CBRE's Scotta Ashcraft, Nick Carkonen and Leah Masson. Royal Commercial is also currently offering some space in the building on a sublease basis.

Meanwhile, work has also been ongoing at 999 Third, aka DocuSign Tower, aka the former Wells Fargo Center. The lower retail levels and plaza have been extensively revamped — along with the escalator on Third. The effort predates the building's sale to EQ Office. Mithun and Kiewit are behind that plan.

EQ Office previously spiffed up and rebranded what it now calls The Exchange (aka the landmarked 1929 art deco-style Exchange Building). SkB and HST Construction were behind that refresh.

Ahead, EQ Office says that improvements will also be made to its 800 Fifth tower, which it purchased two years ago for $540 million. That 40-year-old, 42-story tower was renovated two years before the sale, under the guidance of LMN.