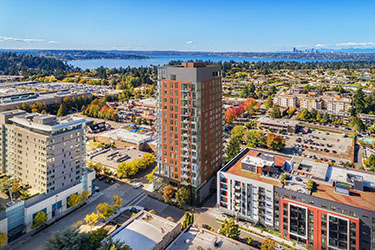 Rendering by MZA [enlarge]
This perspective looks southwest at the project, with the prior Mira Flats at right.

Create World has long planned a second condominium project south of its Mira Flats in Bellevue. It sold the latter two years ago, after completion but before individual sales began, and has since been concentrating on the south site, at 10232 N.E. 10th St. Now the EB-5 developer has announced a ceremonial groundbreaking next Wednesday for the 20-story, 138-unit project.