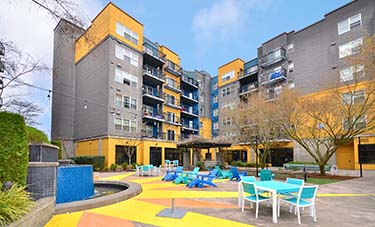 Solara, at 12736 Lake City Way N.E., has sold for $84 million, according to King County records. The seller was SRGMF II Lake City Seattle LLC, associated with Sares Regis Group, which acquired the property in 2016 for about $65.2 million. That represents a gain of about 28% over five years of ownership.

The buyer was Solara Seattle Apartments LLC, which is associated with MIG Real Estate, a regular presence in our market. Public records indicate a nearly $62.3 million loan from Forethought Life Insurance. Both parties are based in Southern California.

Brokers were not announced. Including the retail/commercial space, the deal was worth about $415 per square foot. Commercial tenants appear to be The Beer Authority, Taiwanese restaurant Yuan Bao, a panini shop, and a hair salon/spa. Ewing & Clark brokers that space, with a former gym now vacant.

Completed in 2001, the three five-story buildings have 238 units, which tend to be fairly large — averaging around 716 square feet, per the county. They're massed around a large central courtyard. Rents aren't listed on the leasing website.

The complex spans nearly 2 acres, and extends east to 33rd Avenue Northeast, which provides some of the parking access. There are 288 structured and underground stalls.

Solara is a few steps north to the Fred Meyer. Weber Thompson designed the project, which was built by W.G. Clark Construction. It remains one of the larger multifamily projects in Lake City. Simpson Housing of Denver and LaSalle Investment Management of Chicago were the original developers.

Sares Regis, or SRG, last year earned an Emerald Award from the Washington Multi-Family Housing Association for best renovation in a complex with over 151 units. City records don't indicate the contractor for that.