Take a tour inside the new Climate Pledge Arena 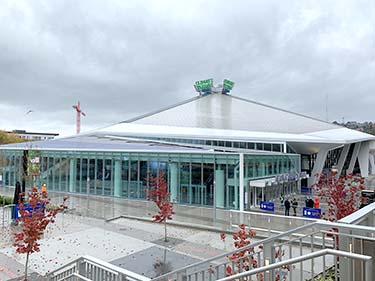 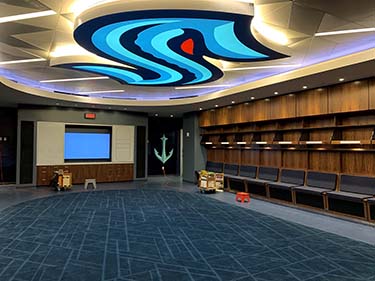 The former Washington State Pavilion, as it was known for the 1962 World's Fair, has a new address, 334 First Ave. N., to go with its new name. Yesterday at Climate Pledge Arena, the Seattle Kraken and Oak View Group hosted their first media tour for the freshly opened venue.

The inaugural event, a concert with Foo Fighters and Death Cab for Cutie, had been held the prior Tuesday night, so the place was swarming with workers. Down on the arena floor, about 80 feet below grade, dozens of roadies were revamping the stage and lights for Coldplay on Friday night. After that, CPA crews will immediately pivot to hockey — readying the ice, lowering the scoreboards, and reconfiguring the floor-level seating — for the Kraken's first home game on Saturday. (The seating can range from about 17,100 to 18,100 for a given event.)

Oh, and general contractor Mortenson has its workers going non-stop as well, both in and outside the CPA, for punch-list work expected to last several weeks. The contractor announced on Monday that the city had issued a certificate of occupancy, clearing the way for the concerts and hockey. Mortenson crews had been working 24/7 for the past several weeks to meet their deadline.

“We made it,” said Kurt Amundsen of architect Populous of that very hard, first-home-game deadline set by its client. And that's all that matters, though the project budget did swell to $1.15 billion during the nearly three years of construction.

During that time, the privately funded project had to contend not just with the pandemic, said Amundsen, but with global supply chain issues. Key materials or components to the project, late in the schedule, had to be replaced or re-sourced.

Excavating the 680,000 cubic yards of earth to expand and lower the stadium bowl was relatively straightforward. But, said Amundsen, the trucks were a different matter. Hauling and delivery were a headache — one compounded by the loss of KeyArena's old south loading docks, which were above grade and ridiculously inadequate for modern sports or music use.

All that area along Thomas Street was excavated, too, to make room for a giant new underground loading dock (with eight bays, and capable of accommodating 16 big rigs!), back-of-house operations, locker rooms, service areas, some private club rooms for sponsors and much more. “I never thought I'd be showing off a loading dock,” says the Kraken's Todd Humphrey, “but here we are.”

Access comes via a 190-foot-long tunnel, wide enough for trucks to pass in opposite lanes, that extends beneath the landmarked Bressi garage on First Avenue North. Populous said that preserving the Bressi, landmarked in 2017, was one of the project's bigger headaches.

And there's also a new underground parking area, north of Thomas, beneath the public plaza and Alaska Airlines Atrium, which extends south beyond the roofline of Paul Thiry's iconic and landmarked original arena design. Inside that glassy, multilevel structure it's a bit startling to find one of those graceful white buttresses now inside the building and out of the light autumnal rain.

Excluding the new 450-stall garage, with its direct, private entry to CPA, the new structure now has about 740,000 square feet of usable floor area — both above and below grade. That compares to about 400,000 square feet for the original, which changed names several times during the past six decades.

In addition to preserving the roof, said Amundsen, the original glass curtainwall had also been landmarked back in 2017. So that was disassembled from the west, north and east aspects of the building, put into storage and finally reinstalled with modern high-performance glass.

The latter, along with all CPA's many deep-green energy saving features, will allow it to become the world's first zero-carbon certified arena — as is anticipated from the International Living Future Institute.

One prominent example of CPA's sustainability is the harvesting of rainwater to be used to create the ice for the Kraken. CPA is also a zero-waste diversion facility, which will also buy carbon credits from The Nature Conservancy, to preserve farmland and forests, to offset the emissions created by its visiting fans.

The Climate Pledge itself was launched two years ago by Global Optimism and Amazon. The latter bought the stadium naming rights last year for an undisclosed amount. And its technology is evident everywhere in the new building.

Amazon is licensing its Just Walk Out technology to four food vendors in CPA, including Shaquille O'Neal's new Big Chicken restaurant. You can even use your palm to pass through the turnstiles, by first registering with Amazon before visiting CPA or while at the venue. It's the first such venue to employ Just Walk Out, what Humphrey calls “a flagship example” for the platform, which is gradually expanding here and in other cities for non-Amazon-branded use. (In other words: not just Amazon Go, but soon maybe everywhere?)

While leading the DJC's tour group, the Kraken's Humphrey calls CPA “the world's most well funded startup,” thanks to Amazon's deep pockets on top of OVG's clout.

His involvement with the stadium extends back to 2016, when Ed Murray was mayor. During the interim, he's worked with Amazon executives including Andy Jassy (now CEO, then leading AWS); he joined the Kraken three years ago to lead its digital and tech outreach. (He's also a Canadian who played college and semi-pro hockey.)

Among local brands you'll encounter, some with luxury suite or lounge naming rights, are WaFd, Ballard Pizza, Filson, Symetra, Starbucks, 14 Hands, Din Tai Fung, Elliott's Oyster House, and Metropolitan Grill. There are about 30 name sponsors in all, also with some out-of-state brands like Moet & Chandon, Coors, Pitchbook, Modelo, and Verizon.

Inside the bowl, Humphrey points to the roughly 1,500 retractable seats that fold flat and disappear with the click of a mouse. “Those were stuck in Ukraine,” he says, owing to supply chain issues. “Hit a button, and they retract like an accordion.”

Starting inside the atrium, Humphrey enthused, “Now there's no ugly back-of-house side of the building.” Almost every square inch above grade is usable, and much of it is used for food, drink and merchandise sales. There are multiple Kraken stores and kiosks; goods there can be pre-ordered or ordered between games by app.

“We're going as much as we can to cut down on lines,” says Humphrey. To the extent possible, everything is paperless, pay-by-app or Just Walk Out. He asks rhetorically, the challenge was, “How do we reduce that friction? Our goal was to cut that in half.” He speaks of “the app experience, the fan experience” and the constant mantra of being “more efficient.”

Fans and concertgoers will pass through 18 entryways, some leading directly to exclusive, premium areas. Those suites and club rooms feature private bars and restaurants in some cases; and most have viewing seats that are cantilevered out over what Humphrey calls the upper bowl. The separation between upper and lower bowls is at grade; CPA has five levels including the mostly non-public lower level four (home to the windowless tunnel clubs) and a partial level five that's home to the five-star Space Needle Club.

(The distinction between named club, lounge and suite isn't always clear, but they have different ticket prices and levels of access; banks of dedicated bleacher seats are attached to each, so you can go back and forth from game to bar.)

“All the premium areas were done by Rockwell Group,” says Humphrey. That firm, of New York, came in mid-project as the interiors architect and design consultant. Seattle native Shawn Sullivan led the effort, and says it's the firm's first completed work in our market.

CPA has copious LED displays, all designed by Daktronics; Populous says there are 28,175 square feet of such displays, all throughout the facility. They're programmable, of course, to be tailored to various events and communicate what Humphrey calls “the story” or themes that the host — or advertisers — want to communicate.

High above the arena floor, the two triangular, retractable scoreboards live up in the steel rafters when not in use; those rafters can support lighting and other equipment up to 400,000 pounds (or 200 tons).

One aspect to all the technology that fans will appreciate extends all the way down to the bottom levels of the building. “There is free WiFi. People need that data,” says Humphrey. Verizon is the provider, and it works well everywhere.