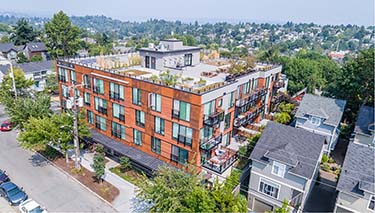 Photo by Anthony Nakshabandi/Johnston Architects [enlarge]
Stencil was one of the early apartment projects at 23rd and Union, which is now seeing much more development.

The Stencil, at 2407 E. Union St., has sold for $18.5 million, according to King County records. The seller was an LLC associated with Lake Union Partners, which acquired the corner property in 2014 for over $1.2 million, then developed it.