Meta pre-leases all of Block 13 in Bellevue's Spring District 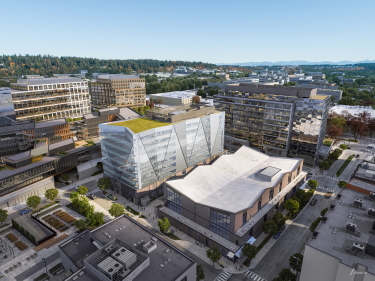 Images from NBBJ [enlarge]
Block 13, in the center with the green roof, will have triangular design elements reflecting those found on the roof of the adjacent GIX building. 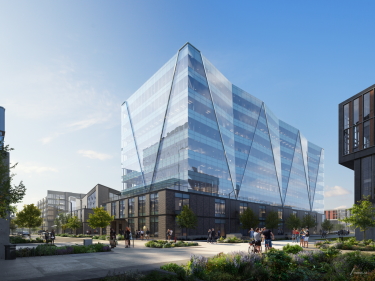 [enlarge]
The building will go roughly in the middle of the Spring District, east of the central greenspace.

Block 13 will be the fifth building in the neighborhood leased by Meta, bringing its total leased area to over 1.4 million square feet, according to a news release from Wright Runstad. Terms of the deal were not disclosed.

“The successful pre-lease of the Block 13 project further exemplifies the considerable demand for commercial space in the thriving Spring District,” said Wright Runstad CEO Greg Johnson in the release. “We look forward to providing our tenants with the unique and industry-leading amenities they have come to expect from us.”

Meta will occupy the entire nine-story building planned at 1325 123rd Ave. N.E. It will be located between Block 20, the former REI headquarters that Meta bought last year, and the University of Washington's Global Innovation Exchange (GIX) building. No retail space is planned for the new building.

Wright Runstad disclosed the Block 13 project team is led by architect NBBJ and general contractor BNBuilders. This is the same team it used for the new 10-story 400 University office tower, which is a companion to the developer's new 58-story Rainier Square tower in downtown Seattle.

Wright Runstad said construction will start next year and finish sometime in 2024. Environmental documents submitted to the city earlier this year indicate the building will have four levels of underground parking for 270 vehicles.

Wright Runstad calls the transit-oriented and sustainable Spring District “Bellevue's most exciting new neighborhood.” In addition to Meta's presence and UW's GIX building, the neighborhood has over 800 residential units and Bellevue Brewing Co.'s new location, which is scheduled to open next year near the Block 13 site. Light rail is expected to reach the district in 2023, connecting it to downtown Seattle and beyond.