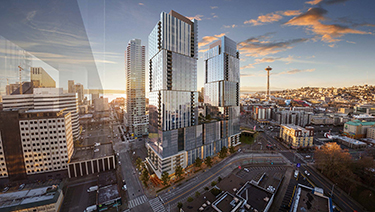 It's a tale of two pits, one not yet dug. On the east half of a Denny Triangle block, at 2301 Seventh Ave., Onni Group has a prior master use permit for two 42-story towers designed by Graphite Design Group. The city recently approved relatively minor changes to that MUP: less parking, more offices and fewer apartments. No excavation work has begun there, and no start date has been announced. The nearly $79 million land sale came four years ago.