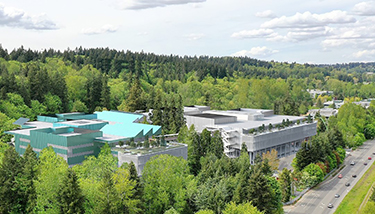 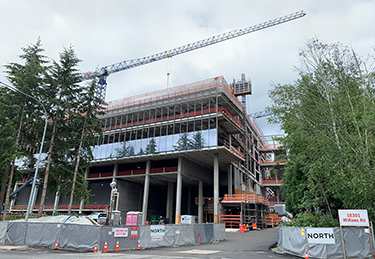 Photo by Brian Miller [enlarge]
Building X, to the north, has topped out.

BNBuilders is topped out and perhaps halfway done constructing Building X, for Facebook/Meta, on Willows Road in Redmond. Gehry Partners, led by Frank Gehry, is the architect. We'll recap details below.

Now Gehry is planning Building Z for the same client, on land immediately to the south at 10201 Willows Road N.E. That project has its first design review on Thursday, in a virtual presentation.

The two buildings will be linked by a 108-foot-long pedestrian bridge. Facebook acquired the 15-acre former Crane Electronics property in 2017 for $20 million, then later tore down the first (north) of the two old Crane buildings. Building Z will replace the second south building. There's no indication yet if there might be a future Building Y.

Building Z, also on a forested, sloping site, is slated to have four underground and structured levels with 811 parking stalls. The upper three office floors will have some 336,701 square feet for engineers and staff at Meta Reality Lab.

Gehry writes, “Building Z is a laboratory for engineers at Meta Reality Lab. Like its neighbor Building X, it is designed to optimize functionality as a lab and office. This project proposes a building that will promote casual interactions between members of our clients engineering teams.

“The client team asked for a building like Bell Labs, the great research building that Eero Saarinen designed in New Jersey. They liked the simple, straightforward design of this building and the way the circulation within it caused engineers to bump into each other, talk collaborate and innovate at an unprecedented level. We have taken inspiration from this design.”

Indeed, Building Z has a sawtooth roof in some areas, suggesting the lightwells (or clerestories) common to industrial buildings of yore. There are lots of terraces and outdoor mixing areas, too. There's a large central atrium to connect the office levels. Nearly 200 bike stalls are planned.

Blue will be the primary if not dominant color.

Gehry will target LEED Platinum certification with solar panels, EV charging in the garage, entirely electric systems, low-carbon construction methods and recycling of rooftop watershed and stormwater all over the site. Salmon Safe certification is also a goal. The architect writes, “We are proposing a development that has no negative bleed into the local ecosystems.”

One design cue Gehry cites for the pedestrian bridge is the Wilburton trestle in Bellevue. The new covered span would have a wooden walkway, and its angled steel supports also suggest that and other old trestles of our region's logging past.

Both buildings are — or will be — largely screened by Douglas firs, set back some 100 feet from Willows Road. Their large but discreet presence is intentional, says the architect: “When Frank Gehry first met with Mark Zuckerberg, Mark told him he did not want flashy, iconic buildings. He wanted buildings that functioned well, but that were anonymous. He wanted an architecture that expressed his company's values: modest, forward-looking, unfinished, a work in progress, very flexible and most of all buildings that would fly under the radar.”

Right now there are two cranes from Comansa swinging over Building X, at 10301 Willows. That's slated to have about 350,000 square feet of offices and lab space over three levels of parking.

The latter, prior to the land deal, prepared a site report for Facebook that simply called the whole thing Project Mammoth.