Downtown's Plymouth Church puts its half block on the market 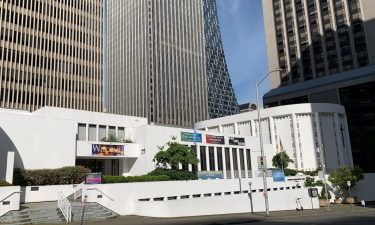 Photo by Brian Miller [enlarge]
Today, Plymouth is surrounded by high-rise brethren. In Weinstein’s massing study, it would join their ranks. 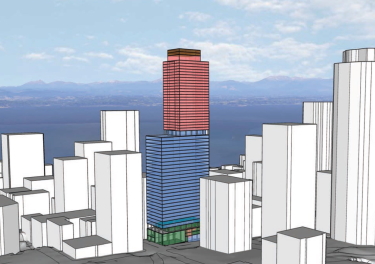 Rendering by Weinstein AU [enlarge]
One possible scenario would be a 56-story tower: the lowest four floors for the church; then the next 27 floors with offices; and the final 25 with apartments.

The latest example: Plymouth Church, at 1217 Sixth Ave., between University and Seneca streets. Meriwether Advisors put the downtown property on the market, unpriced, last week; that firm has helped several other churches dispose of their properties in recent years.

Plymouth was founded in Pioneer Square in 1869, some 18 years after the Denny Party landed at Alki Point, nearly three decades before the Klondike Gold Rush put Seattle on the map. Its name and locations have changed over the years. The current appellation is Plymouth United Church of Christ.

Plymouth moved to its present location, its fourth, in 1912. NBBJ designed the current church, which opened in 1967. That is surely doomed. No demolition permit application has been filed. Yet.

Meriwether calls the Plymouth property “the West Coast's most premier high-rise development site,” which may not be hyperbole. The half block offers 28,800 square feet, with high-rise zoning.

Meriwether says the church “is now looking for a development partner to redevelop either a portion or the entire Plymouth property. The church will look to remain in the podium of the project and own a condominium interest in the space they occupy.”

Similar deals have been proposed or arranged for the now demolished University Temple United Methodist Church, in the University District, and Trinity Church on First Hill. (The latter effort failed, and that property is again for sale.)

Meriwether's Douglas Barrett, David Rothrock and Matthew Brennan are representing Plymouth. Letters of interest are due July 29, followed by presentations in August and the possible selection of a developer in September.

Barrett told the DJC, “At this point, the church is carefully exploring its options, and looks forward to creative and impactful ideas that will surface from the development community. They wish to proceed with a development only if it aligns with their vision, values and intentions, and they are deeply committed to remaining on its site, relevant and rooted in the downtown core of Seattle.”

The size of its current congregation is unknown. Seattle churches have seen declining numbers in their pews since the highs of the immediate postwar years.

Weinstein AU prepared a feasibility study for the church and its brokers. One possible scenario would be a 56-story tower: the lowest four floors for the church; then the next 27 floors with offices; and the final 25 with apartments. Size above grade? About 1 million square feet.

But any combination of residences, offices and hotel rooms could work.

Nearby on First Hill, Meriwether is also advising the Archdiocese of Seattle in a deal that could see three of its properties near St. James Cathedral be sold to Westbank. It previously guided University Christian Church through a similar process, and is again seeking to make such a deal on Trinity's half block

Representation is unknown for First Presbyterian, which has a land use permit for demolition — but as of yet no buyer.