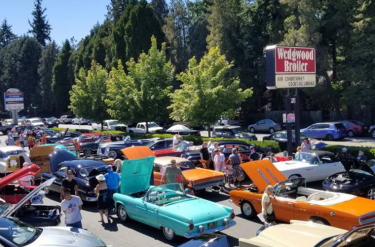 Photo by the Wedgwood Broiler [enlarge]
It remains to be seen whether the restaurant or grocer could be enticed back to the proposed new mixed-use building.

Developed in 1959 and 1966, Wedgwood Center is known in its namesake neighborhood for the QFC, which closed last April, and longtime local favorite the Wedgwood Broiler — which thankfully remains open at 8400 35th Ave. N.E. The 2-acre North Seattle property, owned by an area family, hasn't traded in decades. (The Williams family may well have been the original developer.)

The proposal hasn't yet entered design review. It describes a midrise apartment building with 280 units over retail/commercial space. The latter would have 34,500 square feet for an unnamed grocer on the north corner, at North 85th Street. On the south corner, North 82nd Street, would be another 14,000 square feet of commercial space.

Five stories seems likely for a site that's zoned up to 55 feet. Security Properties has ample experience with similar midrise projects like the planned Magnolia Albertsons redo, and past Fremont PCC and apartments.

A curb cut in the middle of the Wedgwood property would lead to a few structured short-term parking stalls, then to some 300 stalls below grade. The tenant lobby would also go in the middle of the long building. Total project size: about 419,750 square feet. The team also includes Bush, Roed & Hitchings, surveyor.

QFC had around 15,060 square feet, small by modern grocery standards. (It opened in 1959 as a Tradewell.) Parent Kroger closed the Wedgwood and Capitol Hill QFCs during the pandemic, then citing the Seattle City Council's $4 per hour hazard pay bump — a measure that was subsequently repealed.

Whether Kroger would want to return, in a grocery market radically altered by the pandemic and competition from Amazon and other delivery services, is entirely uncertain. Other smaller chains like PCC or Met Market might leap at the location.

Landowner Wes Williams told the Seattle Times in December that he wasn't interested in selling, and that Kroger was still paying rent for the empty space.

Security Properties says it would like to retain current tenants in the new development. (There's now also a hair salon, bank and coffee shop.) The Wedgwood Community Council said in December that Kroger had two years left on its lease, plus a five-year option to extend. That does not reflect any possible lease-termination clause that might accompany a sale. And, to entitle such a large project, plus the subsequent construction, would typically take about four years.

Since opening in 1966, the Broiler business has changed hands three times, per the restaurant website. The lease has since 1997 been held by Derek Cockbain. Restaurants are loathe to shut their doors for lengthy periods of construction, but there have been exceptions like Spud Fish & Chips at Green Lake.