As municipalities throughout the region move forward on addressing goals for accommodating growth, the attention of developers and homebuilders continues to focus on the role that larger cities play in the future of urban development. They’re attracted to the concept of smart, eco-friendly growth, which to date has been intrinsically tied to urban centers, not necessarily the suburbs.

The tendency to look toward downtowns for lessons in sustainably designed communities certainly makes sense. After all, urban centers account for a vast majority of jobs and affordable housing, not to mention their convenient access to retail, services, and public transit. In addition, developing where core infrastructure already exists has a much lighter footprint on the earth compared to building miles of new roads into distant suburbs.

Small towns can also play a significant role in meeting our long-term sustainable-growth objectives, including here in western Washington. Growing cities with classic downtown elements — particularly those that aren’t being fully utilized — can offer interesting opportunities for developers and builders to contribute to the region’s economic and environmental health.

A prime example can be found in Cle Elum where Trailside Group is creating Ederra, one of the newest mixed-use developments in the Northwest. The Issaquah-based land-development company is preparing to offer new homesites to builders seeking opportunities in proven master-planned communities, part of Trailside Group’s support of a historic Washington mining town striving to achieve a sustainable future. When complete, Ederra will help Cle Elum to build stronger connections with both nature and its existing downtown core, while it provides a creative option for today’s increasingly hybrid workforce. 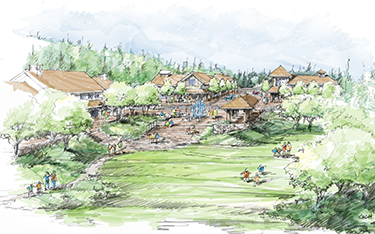 Image courtesy of Trailside Group [enlarge]
Ederra Pavilion is part of the master-planned community’s robust outdoor amenities program, which will include at least three public parks.

Ederra is a 358-acre master-planned community that will deliver up to 962 new single- and multifamily homes, complementary on-site retail, miles of new and improved biking and hiking trails, and some 200 acres of open space connecting downtown with surrounding public forest land — including the Teanaway State Forest. Public-access outdoor amenities are a significant part of the overall Ederra plan, given the project’s pristine location and the Cle Elum community’s deep connection with the great outdoors.

In terms of economic benefits, Ederra will provide a much-needed boost to a town with stagnant tax revenue. Master plans like Ederra typically include the requirement of mitigation fees associated with each home. In contrast to new, single-development homes on scattered lots that pay no mitigation fees, each Ederra home will contribute approximately $9,000 in fees — revenues that will funnel directly to public schools, first responders, ongoing infrastructure improvements, and other critical services. The new homes at Ederra will establish an ongoing tax base that supports a fiscally responsible future for Cle Elum, something that can’t be overlooked by smaller urban communities addressing their long-term growth plans.

Throughout the Ederra build-out, Trailside Group will pay at least $10 million in mitigation fees to Cle Elum, including $1.8 million in early-stage lump-sum payments which will go straight into the city’s operating budget. Trailside Group’s development of Ederra will also generate hundreds of well-paying jobs to the community, helping to ease the sting of rising inflation and a potentially recessive economy.

Construction recently started on phase one at Ederra, which is located just north of downtown Cle Elum and extends deep into unincorporated Upper Kittitas County. The wide variety of homes at Ederra will provide a critical increase in supply to Cle Elum which, like other municipalities across the region, is struggling to keep up with residential demand — especially from residents who want access to both open space and well-connected, environmentally friendly neighborhoods.

Studies show that small towns are increasingly bearing the brunt of the nationwide housing crisis, with costs rising prohibitively in places like Cle Elum due to first- and second-time homebuyers fleeing metropolitan areas in search of more-affordable housing, not to mention the slower pace of life that communities like Ederra provide.

The Ederra community, originally approved with a development agreement forged 11 years ago between Trailside Group and the city of Cle Elum, is moving forward vigorously with a shared public-private vision for the future of the region. The recently signed memorandum of understanding at Ederra signifies an aspirational vision that Trailside Group has shared all along with the greater Cle Elum community — including residents, business owners and other stakeholders who for years have sought an economically and environmentally viable means of moving this small, mountainside community into a sustainable future.

Ederra is a community that stands for everything that makes Upper Kittitas such a unique place to live and recreate. More than anything, though, Ederra is a smart, thoughtful development that helps Cle Elum to address inevitable urban growth while it preserves valuable open space, trail access, and outdoor activities. And that’s something that benefits everyone, including urban centers like Seattle and Bellevue.

Sean Northrop is the founder and CEO at Trailside Group, a land-development company based in Issaquah.