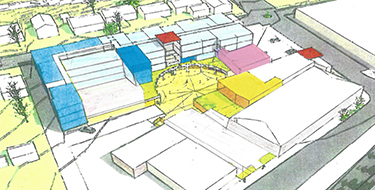 Rendering courtesy of Rolluda Architects [enlarge]
The FCS headquarters is shown here at the corner. The housing would be built east of it.

Filipino Community of Seattle would like to start construction next year on 70 apartments for low-income seniors and others.

The four-story building will be just east of the organization's headquarters at 5740 Martin Luther King Junior Way S.

Rolluda Architects is designing the horseshoe-shaped building, which will wrap around a large patio.

The $19 million complex will be built on seven parcels, totaling 30,000 square feet, that FCS has purchased since 2008.

FCS Executive Director Sheila Burrus said this is the organization's first housing project so it is partnering with Catholic Community Services of Western Washington, which has over 30 years of experience building housing.

“They really want to help the Filipino community,” she said.

Burrus said the partnership will develop and own the building, and lease the land from FCS. After 15 years, the building will be owned solely by FCS.

Studios and apartments with up to three bedrooms are planned as well as a rooftop garden, commercial kitchen, laundry room, dining room and reception area.

The building also will have a 3,000-square-foot technology center for FCS's youth program, offering instruction on robotics, 3D arts and computer repair. The center will also be used by adults, including business owners, for job and technical assistance. Those programs are now in the community center at FCS's headquarters.

Burrus said FCS recently received $1.2 million from the state's Community Projects fund for the project, and has raised $250,000 from the community.