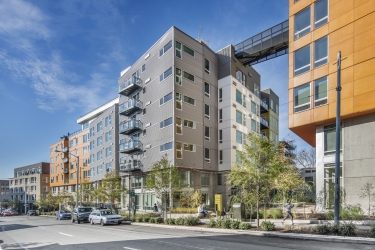 The were 665 entries for the awards, which recognize community and housing design and planning, green-built housing, site planning, commercial, retail, mixed-use and specialty categories.

Astro Apartments was named the best multifamily housing in the 30 to 60-units-per-acre category. SRM Development developed it and SRMQA, LLC built it.

Judges said the 7-story, 384-unit project will be one of the most sustainable buildings of its type in the country. The innovative wastewater heat recovery system will be the first of its kind in the U.S., capturing wastewater heat from dishwashers, showers and washing machines through a heat exchanger. Ductless heat pumps and energy recovery ventilators are projected to result in more than 50 percent energy use reduction over a national baseline. 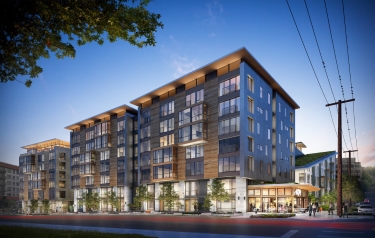 Rendering by Neoscape [enlarge]
Runberg’s design for Block 11 won a grand award. Judges said Vulcan’s proposed 7-story, 384-unit project will be one of the most sustainable buildings of its type in the U.S.

Judges also liked the green roof, urban agriculture and a tree-filled courtyard that is accessible to both residents and the community.

Block 47 won a merit award in best on the boards for projects up to 50 units per acre. Vulcan Real Estate is developing Block 11 and Block 47.

• 4730 California in the best multifamily community over 250 units per acre. The Wolff Co. developed and Compass General Construction built the project.

The Miller Hull Partnership, along with Chicago firm Sullivan Goulette & Wilson, won a grand award for 747 N. Clark in Chicago in the best multifamily community under 18 units per acre. Ranquist Development Group was the developer and Maris Construction was the builder.

Chris Pardo Design: Elemental Architecture, which has offices in Seattle and Palm Springs, California, won a grand award in the best commercial project under 20,000 square feet. Arrive Hotel in Palm Springs was developed by Palm Grove Group and built by D.W. Johnston.

Carrier Johnson + Culture won a merit award in the best multifamily community 100 to 250 units per acre. The award is for The Brand in Glendale, California, which was developed by Vancouver-based Holland Partner Group and built by Holland Construction.

For all the winners, go to http://tiny.cc/yxf1cy/.