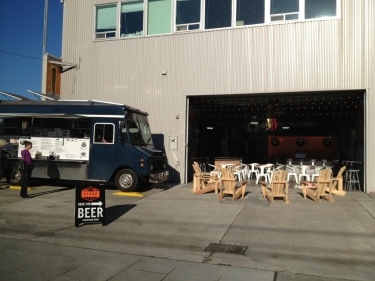 [enlarge]
A commercial-industrial project will be built there, along with a new patio for Stoup Brewing.

The family associated with Ness Cranes sold a 55,000-square-foot site in Ballard where the company originally started for $6.15 million, King County records show.

Ness Cranes was founded in 1950 by Harold Ness, a son of Norwegian immigrants who died in 2002, leaving the business and land to his three sons. In 2005, the Ness company was acquired by Campbell Crane, which was founded in 1947. Ness & Campbell Crane is now based in Bothell and Portland; it has no connection to the property sale.

The site is at 1127 N.W. 53rd St. and related addresses. It is currently zoned for industrial uses, but sits in a patchwork neighborhood of old single-family homes, microbreweries, new apartments and townhouses.

The buyer was an LLC called West Woodland Business Center.

Plans filed with the city, using the address 1128 N.W. 52nd St., call for constructing a three-story, 65,000-square-foot commercial-industrial project. Some buildings on the site will be preserved, but no housing or rezoning is planned.

The developer is Avenue 55 of Seattle, and the architect is BCRA. No contractor is mentioned in the plans.

New construction will include adding a patio for an existing tenant, Stoup Brewing, which is located at 1108 N.W. 52nd St.

Joe Blattner is the president and founder of Avenue 55. He has been investing in and developing commercial and multi-family property for decades. Avenue 55's website said he has developed more than 20 million square feet of industrial, retail, office and multifamily projects. Before forming Avenue 55, Blattner was president and managing partner of Tarragon development company.

Randall Ness said that Ness & Campbell leased the property from 2005-12. Since then the family has had various tenants.

Stoup Brewing opened in 2013 and is part of the burgeoning craft beer community in what is now Ballard's Brewing District.

Ness Cranes' wrecking-ball logo can be seen on trucker's hats in trendier bars around Ballard. Ness said, “They took our name (in the 2005 company sale),” but he pronounced the family happy with the property sale.