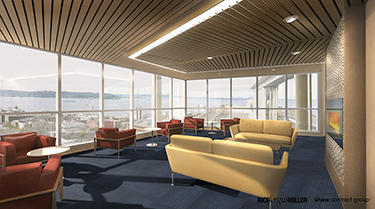 The 10-story Bayview Retirement Community was built in 1961 on a Queen Anne Hill site that was donated for the care of older adults and children.

This month, the nonprofit corporation, called Bayview, that owns the continuing care retirement community began a $57 million renovation and addition aimed in part at attracting Baby Boomers who want to live large — both inside and out of their apartments.

Bayview CEO Mary Cordts said boomers want more options when it comes to dining, fitness and entertainment as well as updated and larger units. “People have other options to select from, and when you compared, we were dated. We needed to improve our amenities,” she said.

Bayview is at 11 W. Aloha St., and has about 210 residents. There are 124 independent apartments, 45 assisted-living units and 50 skilled nursing home beds as well as a childcare center for up to 44 children. Some programs let seniors and kids interact.

The 18-month construction project will be done in phases, including an addition that will go over a parking lot and connect to the 10-story building. It will add 11 assisted-living units, and something new for Bayview: a 10-unit memory care residence.

“When we were built in 1961 we were really built for widows, so there's a lot of small studio apartments,” she said.

Some of those will be kept, but she said a market study has shown there is demand for larger units.

But Bayview does not want to price people out, and will continue to have studios, alcoves and one-bedrooms in varying sizes and prices, she said.

As part of the renovation, some residents can get their apartments updated with full kitchens and washers and dryers.

Interior corridors, common spaces, the library and dining areas will be refreshed. An additional elevator will be added and a 10th-floor skylounge.

The wellness center will be moved to make it more accessible, a spa will be added and the fitness center updated. The pool will be replaced with a larger one and there will be an outdoor dog park, p-patch garden, and studio for arts and cooking.

Cordts said seniors want to be intellectually and socially engaged, and the renovation will give them more spaces to do so.

“I think the goal for everyone, you and I and all of our friends and our parents, is we want live long and die short,” Cordts said.

Lawton Project Management is the owner's representative and Andersen Construction is the general contractor.

The building is landlocked, he said, so the work will focus on making flexible spaces, some with movable partitions that allow rooms to be combined for events.

RFM does a lot of repositioning for senior living campuses, Miller said. The owners want to attract younger baby boomers and be in a position to draw the next generation, with amenities that encourage seniors to leave their homes for retirement living.

Miller said robust fitness and aquatic centers can do that as well as entertainment spaces such as bars, wine cellars, technology (including virtual golf), and third place spaces such as coffee shops and bistros. “Nobody's playing shuffleboard anymore,” he said.

For over 10 years the firm has done these repositionings to attract a range of ages and incomes and compete in the marketplace, he said. That work ranges from designing a renovation for Horizon House in Seattle to developing the master plan for Emerald Heights in Redmond.

“There's a huge need for housing for people who are aging that spans the independent living all the way to skilled nursing,” Miller said.

Bayview was built on property that early Seattleite Charles A. Kinnear donated to the First United Methodist Church. It maintains its affiliation with the church, but accepts residents from all spiritual traditions, and provides all levels of care to people 62 and older. It is managed by a volunteer board of trustees.

Cordts said your attitude is the most important factor in how much you get out of life as you age.

Some people are disengaged at 70, she said, some are very engaged at 80 and 90 — and then there's a 104-year-old Bayview resident who still writes poetry.