Crib Notes: When will the market turn? Watch Amazon

It's stat-talkin' time again so let's crunch some numbers.

Housing numbers that is. For Seattle. And we'll use as few numbers as possible. Really.

What you most want to know — even more than where we are right now or where we're heading — is “What's the trajectory?” and “What kind of turbulence could change that flight path?”

We're just about to enter the economic forecasting season so those predictions will soon be filling newspapers and websites near you.

Here are some stats, in the meantime:

• The median sale price for single-family homes and condos combined in Seattle (from south of Shoreline to north of Renton) rose ANOTHER 10 percent in 2014 and so far (with just two months to go) is on pace for ANOTHER 10 percent gain in 2015. 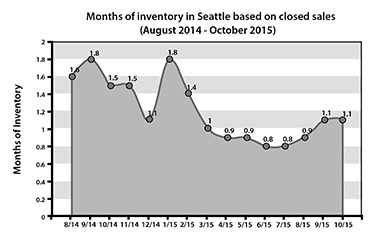 • And while this over-heated rate can't be sustained — repeat: can't, can't, can't — we don't see yet what calamity or condition will cool it. (Paris? Nope. If the Fed raises interest rates in December? Not if it's as gradual as predicted.) Crib says (again) watch Amazon. If they keep hiring, housing prices here keep rising. (And Amazon reported an unexpected profit last quarter, right?)

Instead of endless numbers, let's just talk about how to decipher the ones that come at you each month in newspapers, blogs, Realtor reports etc.

For one, be careful with that monthly flow. Be very careful. It's such a blop of numbers that it becomes a blur by the second paragraph. The person who comes at you saying they get it and here's what it means, well, take that with a grain of salt.

Watching how the numbers bounce around from month-to-month is fairly useless. It's like noting that this year's Seahawks have a lead going into the fourth quarter. So what! Doesn't tell you if they'll win or lose!

A highly regarded national group called Case-Schiller has a great formula going: They “weight” the stats. However, they're still pretty useless for following Seattle, and even King County. Their stats for this area only look at the three metropolitan counties — King, Snohomish and Pierce — all lumped into one. They also come out a month or two late.

What happens in rural Pierce or Snohomish County says nothing about where Queen Anne is headed. Heck, even drawing the line at the Seattle city limit reduces the value of the data. What's going on south of Rainier Beach tells almost nothing about Queen Anne either. Not at any fine level of detail.

The Northwest MLS issues monthly stats within days of the end of each month. Better timing, but variations in the broad geographical area they cover diminish the value of the data. The best part of the reports is the quotes from folks in the trenches, but that's still of marginal value.

What you want to know is things like: How are new-construction modern townhomes of 1,300 to 1,600 square feet within one mile of yours doing over the past three months? How are one-bedroom condos built in the last cycle in Belltown above the 10th floor doing in the past few months? And how about this one on the eight floor that now looks right into an office building?

There IS something we all want to know from these monthly reports and otherwise: Each month we just want a headline to tell us: Has the market changed yet, and if so, how?

We're just not going to get it from those monthly reports. Here's a saying from the trenches: You'll know when the peak is (or the bottom) when you see it in the rear-view mirror. Not before.

Most brokers appear to think the media lags three, four, five months behind.

There's one simple stat that tells a lot: months of inventory. Start with how many homes per month go under contract in an area. We usually do it in six-month increments. Let's say it's six per month (or 36 in six months). Compare that to how many homes are actively available for sale? Six? That's one month's worth of inventory.

If 12 are available, that equals two months of inventory. Between three and six months of inventory is considered a balanced market (balanced between buyer and seller). Below three is a “seller's market.” Sellers have the advantage: Buy mine at this asking price — or better yet, above that — or to heck with you. Someone else will grab it.

At the start of 2015, Seattle — ALL of Seattle — was at 1.6 months of inventory. That's called an “extreme seller's market.” The Puget Sound Business Journal recently nailed it with this headline: “In Seattle, home is where the highest bidder lives.”

Experience tells us what a market turn looks like. Think first of December 2011. We were depressed. The recession was just dragging on. The peak had been August 2007. The crash really set in on 9-15-08. Four long years later — by December 2011 — “this sucks” was still how it felt. Not a single monthly media report suggested change was imminent.

Even housing affordability advocates had gone silent as they quietly worried about their own home values, sobered by prices having dropped more than 35 percent from the peak. Foreclosures were the order of the day.

A real estate crystal ball reader named Steve Harney gave a speech about then in Seattle that was attended only by brokers. He said, “We're in the turn.” We thought it was just more cheerleading to keep us going. Harney's image was a race car heading into the final curve.

But then in January 2012 the monthly numbers showed that the number of homes on the market for sale in Seattle had DECREASED. Just a bit. Too small of a drop for the newspaper reports to detect. The number of days the homes sat on the market also fell a bit. We wondered: Is this just a blip? Then it happened again in February.

Now we're all depressed because prices are too high!

We thought back then, by the way, that as prices rose, and rose, and rose — from the depths and finally up to “pre-recession levels” — that owners who had waited and waited would start flooding the market with homes, and that would even out the price increases by boosting the “low inventory.” That was the “soft landing” theory. But that didn't happen, and we think it's because folks realize that unless they want to leave Seattle, any price increase on their home is also an increase on the price of whatever they would buy next. Ooops. That, and Amazon's phenomenal take-over-the-world hiring pace, keeps new buyers flooding in.

Here's another big turn worth considering: When is “the peak?” In July 2007 there wasn't a single monthly newspaper stats round up that said: The End is here. The game was still — just like during the dot.com boom-and-bust a decade before — buy now because prices will go even higher.

As August 2007 approached, mind-numbing business-page reports tracking the trading of “derivatives” and mortgage-backed securities started noting that those markets were getting shaky as all those “subprime” mortgages started to look bogus. By the middle of August 2007 we knew something was cooling. But we wondered if it would be just a few days of turbulence? People kept buying.

The malaise stayed, though. The coverage started hitting the front pages, with stories like: Just what is a subprime mortgage?

So the malaise dragged on until September 2008. Most people expected it would end and the market would head up. They figured we had our correction. Then Lehman Brothers, AIG, Merrill Lynch, General Motors and more all collapsed, and so did the world economy. That's 9-15-08, more than a year after the subprime meltdown began.

So when's the next turn? Don't look for it in those monthly real estate market roundups. Keep your eye on Amazon — and Google and Facebook — and how they all grow here.