Luma is the first new high-rise condo tower on First Hill in more than 30 years and, as of last week, half of the 168 units have been sold.

This got the Buzz wondering about how some other prominent condo projects here are doing. Including Luma, these projects will bring 1,100 new condos to a market that's hurting for inventory.

• Bosa Development's Insignia, a two-tower, 707-unit complex at Fifth and Bell is almost sold out. Fewer than 80 units remain, bringing it close to 90 percent sold, said Bemi Jauhal, director of marketing and sales for Bosa. The south tower opened last summer, and the north tower is set to open this summer. Jauhal said prices for remaining units start above $900,000. 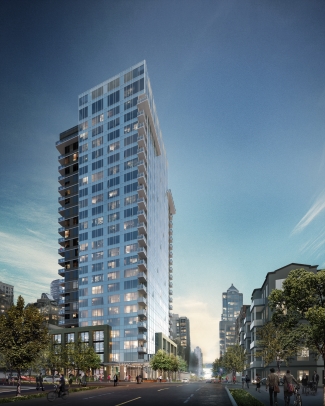 Courtesy Weber Thompson [enlarge]
The 24-story Luma condo tower on First Hill opens in June, and half the units have been sold.

• Daniels Real Estate is adding seven levels of condos and a rooftop deck to the century-old building next to CenturyLink Field that once housed Seattle Plumbing Supply. Gridiron will have 107 units when it opens summer 2017. This project is still in presales, but 18 of the 26 units offered in the first phase of sales are under contract.

• Claudio Guincher's Continental Properties has built condos in this region for decades. Vik, a 117-unit project at 1718 N.W. Market St., is the newest. It opened in January, and only six units are still for sale.

Dean Jones, principal and owner of Realogics Sotheby's International Realty, said condo construction finally is starting to reach the level of what we saw in the last development cycle. Between 2005 and 2010, developers built 3,670 condos downtown and in surrounding neighborhoods, though 777 of those later were converted to apartments. No new condos opened between 2011 and 2014, and the first Insignia tower was completed last year.

Jones estimates there could be as many as 3,248 new condos built between 2015 and 2020, though that's far from a sure thing. That total counts about 1,000 units in the first block of Onni Group's megaproject in South Lake Union, but Onni Group's Evan Lewis told the Buzz his firm hasn't decided yet whether to make the units condos or apartments.

If you remove Onni's units from the count, Jones estimate drops to 2,181. About a third of those are already sold or under contract, leaving about 1,500 new condos to come on the market over the next five years.

Jones said to expect high demand for these condos. Thousands of well-paid renters now in expensive apartments could become buyers, and home values have recovered to the point that more empty-nesters are ready to downsize.

But it takes years to build a high-rise condo, and Seattle's market took off so fast that it's been tough for builders to keep up.

“The problem or challenge with high-rise development is demand can rise much quicker than the supply,” Jones said.

Matthew Gardner, chief economist at Windermere Real Estate, said condo development still hasn't taken off in many areas around the country, and one big reason why is that apartments are so hot.

Banks prefer to finance apartments over condos, and institutional investors are gobbling them up, Gardner said. In the past, a property owner would need to finish a building and get it all leased up before figuring out how much it would go for. That's not the case today.

“You can be less than 50 percent occupied, and the world is beating down your door to buy,” Gardner said.

Lawsuits also hold back condo development. Laws were passed in many states to protect buyers against condos defects, Gardner said. Technology has improved and so has the quality of condos, but Gardner said that doesn't seem to be helping builders much.

“Right now, you are going to get sued whether lawsuits are frivolous or meaningful,” Gardner said.

Gardner said states including Washington, Oregon, California and Colorado are looking at reforming condo laws. Changes that are more forgiving to developers and contractors could spark the condo market.

Trilogy pool: Now you see it; now you don't

Shea Homes is bringing a little Las Vegas flair to the new clubhouse at Trilogy at Tehaleh, a neighborhood near Bonney Lake.

The 14,000-square-foot clubhouse called Seven Summit Lodge opens this weekend and one of its cool features is a “disappearing pool.” The space can be switched in just a few minutes from a swimming pool to a flat floor for meetings and events. Shea Homes said this is one of the first such pools in North America.

The technology that opens and closes the pool made its first big splash when it was used by Cirque du Soleil in Las Vegas. It was created by a Belgian-based company called Hydrofloors.

Trilogy at Tehaleh is Pierce County's only 55-and-over “active adult community.” Prices for units there start in the low $300,000s.

The lodge has a restaurant, great room, demonstration kitchen, sports-themed room with a golf simulator, a gym and a card room.

Tehaleh is a master-planned community that could have as many as 5,900 houses.