On the Block: Legacy eyes another 580 TOD units, plus a woonerf, in downtown Redmond

The ownership venture is called MGRM LLC. Redmond Square may only be a placeholder name for the final proposal.

Legacy is also close to finishing another separate residential project immediately north of the site; more on that below.

Renderings by Tiscareno Associates [enlarge]
The site is just north of Downtown Redmond Station, where light rail service will begin in 2024.

Significantly, Redmond Square is immediately north of Downtown Redmond Station, where light rail service is expected to begin in 2024. The tracks and station will be elevated above the Redmond Central Connector trail.

Redmond Town Center is on the south side of the trail, in an area the city has targeted for more growth and density.

Plans filed with the city by Tiscareno Associates would divide the almost 3.5-acre Redmond Square site into east and west blocks, with a woonerf between them.

Hewitt is the landscape architect for Redmond Square, and is designing the woonerf.

Tiscareno writes that the woonerf will be on a gentle slope above the grade of Redmond Way and Cleveland Street “to create what we refer to as a ‘Plaza Level' that serves to make this public space uniquely pedestrian oriented. Each block has a large private courtyard at this ‘Plaza Level' that provides the majority of open space for this development.”

All three buildings will be six stories, with matching roof heights. To passersby, they would appear to be two irregular C-shaped structures.

Two levels of parking (one underground, one structured) are planned, with garage ramps on the southwest and east sides of the entire site. The final amount of parking has yet to be determined, since MGRM is asking the city for less than the code-mandated ratio of one stall per resident. The proximity of the future light rail, bike/ped trail and Redmond Transit Center (to the north) might make that code departure an easier sell.

Bike rooms would have at least 580 stalls.

Retail/commercial space on both blocks would total about 25,000 square feet. The largest anchor retail bay would go on the site's southeast corner, facing the light rail station. 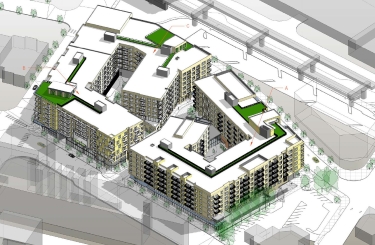 All three buildings would have roof decks.

Tiscareno writes, “Subtle sophistication with symbiotic asymmetry will be the aesthetic theme of this large development.”

Legacy has plenty of experience in Redmond. It developed and then sold in 2016 the 177-unit Milehouse for $68 million. During the recession, it developed most of the 6-acre, six-building Riverpark, which includes 319 residential units, a hotel and offices. Legacy sold the apartments and hotel to Equity Residential in 2012 for $95.3 million. (Clarion Partners owned the offices, which were sold the same year for $38 million.)

Immediately north of Redmond Square, at 16450 Redmond Way, Legacy is just about finished with 195 units at The Triangle. That six-story project was also designed by Tiscareno; Compass Construction is the general contractor. Legacy acquired the skinny, 1-acre triangle for $5.75 million in 2016.

Many other developers also are active nearby, drawn by the new zoning and light rail.

Mill Creek Residential Trust has 300 units underway on the former Redmond Athletic Club site; and it's planning another 250 units closer to the Sammamish River Trail.

Also look for the Subway block, the triangle west of Downtown Central Park, to sell soon. Leibsohn & Co. is offering that property, which could yield a six-story apartment building.

Oh, and there's also stuff happening at the last light rail stop before downtown, Southeast Redmond Station, that we'll get to soon.