On the Block: The Spire condominium is nearly open on Denny

Parking is infrastructure. That's one of the thoughts inspired by watching a Tesla disappear — near silently, almost magically — into a high-tech automated parking system in the new Spire condominium in the Denny Triangle. Future owners at 2510 Sixth Ave. won't begin using the Swiss-engineered Sotefin system until August, when the first move-ins are scheduled.

Laconia Development's great challenge with the small, triangular site, as CEO Paul Menzies explained during a recent pre-opening tour, was its “geometrically challenged” size and shape. Parking was one great headache to solve. (More on that below.) But for VIA Architecture, the triangular plan created the opportunity to maximize views at the 41-story, 343-unit tower. Unlike a big rectangular building on a conventional block, there are no long hallways — or “bowling alleys,” as Menzies dismissively puts it — that are wasted, unsalable space. 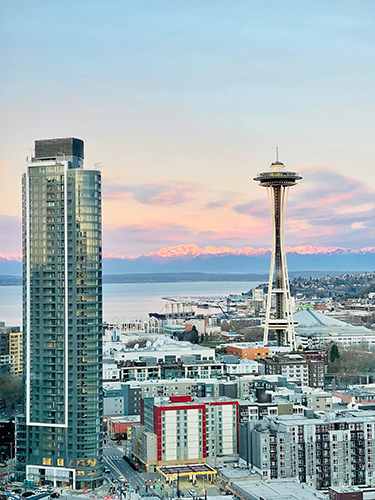 “All the units are specifically designed for panoramic views,” he says. “We knew it would have phenomenal views.”

Indeed, up high, Polaris Pacific is selling the wide vistas and windows galore. (The new city building code doesn't permit so much glazing, says VIA) Floor plates are roughly triangular, too. Touring a trio of model units, up high in the tower, the views smack you in the face.

The project itself was smacked by the pandemic. “It created a hiatus,” says Menzies, and slowed construction and sales. Those with long memories will recall that planning began circa 2006, before the global financial crisis. The 10,660-square-foot site was secured in 2007 for about $4.4 million; then the recession-delayed plan toggled between condos and apartments a few times. (The architect also changed, twice.) Spire finally broke ground in early 2018, with PCL Construction, and topped out last summer.

Menzies recalls being warned of the land purchase, 14 years back, that the south end of the Denny Triangle was “dodgy.” But right about that same time, “Lo and behold, Amazon announced they were building their headquarters a few blocks away.”

Pre-sales began about three years ago, with a different broker. Menzies says that about 40% of units are now sold; were it not for the pandemic, he claims, about 85% would now be spoken for.

Pricing is always dynamic. After a limited-time spring sales event, the range is now something like $485,000, for a 531-square-foot one-bedroom, to $4 million for a three-bedroom with 2,616 square feet. The penthouses on the 38th and 39th floors will go at a premium. Those are still under construction. Spire is a luxury project, but I'll skip the kitchen countertops, pet washing stations, etc. They're all very nice.

The top two floors, 40 and 41, are all resident amenities: gym, lounge, decks, barbecue areas, co-work space, etc. — all handsomely appointed by Robin Chell Design. (The third floor also has amenity space.) But, really, the views are the selling point.

Laconia is based in the Bay Area; here it's known as a high-rise developer. The 32-story Cielo on First Hill was its first local project; that rental building was completed circa 2015 and sold last year for $175 million to Brookfield, which was Laconia's financial partner in that project.

But Menzies says Laconia does midrise and TOD projects back in the Bay Area; and he's looking here for such sites — including Bellevue. In Seattle, he prefers high-rise sites; and the Sotefin parking system would allow consideration of more small, triangular and odd-shaped potential land deals. “Seattle interestingly has other triangles,” says Menzies, who retains the British accent of his homeland.

As to whether to go the rental or condo route, he says, “The market tells you. You don't decide.” Given that every complicated project takes around five years (or 15, in Spire's case), “You have to have faith.” And money, since the estimated project cost is around $350 million.

What's the Spire buyer demographic thus far? “A large supply of Amazon workers, for sure,” says Josh Nasvik of Polaris Pacific. “We're also seeing a few people from the Eastside.” 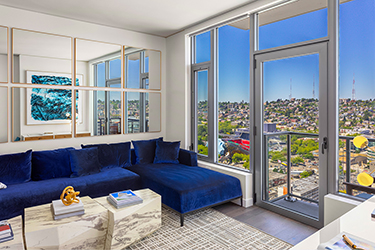 Back down underground, watching the parking system work is neat, and just a touch James Bondian. The thing is too complicated to describe here fully, but a system of lifts, dollies and tracks serves the tree bays on the P1 level (that with one short ramp down, and one separately up). There are no valets. Drivers follow instructions on a video display, lock their cars, use a key card and code, then watch agape as their vehicles descend behind a closed door.

Upon retrieval, they spin in their bays so that motorists never have to use reverse gear: It's one direction in and out. There's a wait time for retrieval from the robot-run levels below, but it's not terrible. And, in the P1 lobby, you can watch the three bays on a video screen; it's kind of lulling and hypnotic, like staring at a rotisserie chicken spinning in the deli.

The system is run by Bay Area firm Parkworks. Its representatives say the system “is a proven technology,” one that only seems novel here. Sotefin has been around for some 60 years, and deploys its automated systems in Europe, China and the Middle East.

The three bays can park 90 cars an hour, and retrieve 60 cars an hour. If you forget your grocery bag, no problem; the system always knows where your car is, and will bring it right back up before the ice cream melts.

Spire represents the first use of a fully automated parking system in Seattle, says Laconia. Simple stacked parking is different; and there the valet has to operate the stacker, unless you do. And parking elevators, also used on tight sites, still involve your own driving and navigation in the cramped garage.

Back to the pricing: Larger, pricier units come with a parking stall, but not so the cheaper condos. All the 266 stalls, or the right to be auto-parked in one of them, are simply floating and unattached. They're almost virtual in that sense, since you never know where your car will be parked. And they cost $75,000 a pop, which is well above the cost of a conventional stall where you're navigating endless underground ramps and perilously tight spaces.

Thus, a two-car couple might opt to buy a second stall on top of the one baked into the sales price. It's a fascinating economic experiment, and Polaris Pacific says that of the early buying pool, about 50% to 60% of buyers opt for parking, and a minority opt out. For them, Uber, Lyft and other transportation alternatives may suffice.

For that latter class of buyers, says Menzies, the thinking may be, “I can use that $75,000 for other things.” And the buyer of a baked-in stall can also deduct it from the purchase price — creating a larger pool for second stall buyers.

Part of the parking premium, Menzies argues, is the sheer convenience, plus the bell-and-whistles aspect. If you own a Tesla, this is the perfect garage for you.

There are three EV stations now, to be operated with the building concierge on the P1 level. During the year ahead, Spire will offer in-stall charging, down in the belly of the Sotefin system. That's engineered by ConnectMyEV (formerly Green Dot Charging), a Bay Area startup.

To simplify greatly, a certain number of stalls will have telescoping charging arms that attach to a universal adapter plug (for a Tesla, Nissan, VW, whatever). The system will know, via the plug (or “dongle”), which cars are electric and in need of charging. If you're already juiced up, the plug goes in the glovebox; and the car gets parked in any random stall. 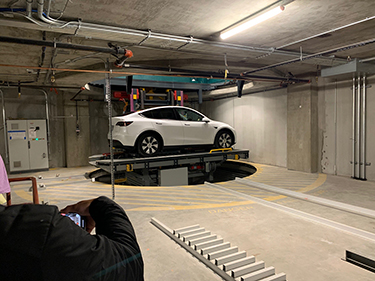 Photo by Brian Miller [enlarge]
Spire represents the first use of a fully automated parking system in Seattle.

Right now, the brokers estimate, about 15% of buyers have an electric vehicle. If that percentage increases, as seems likely in the coming decades, more charging capacity could be added to the stalls below. And that is what I mean by infrastructure.

Other condo towers — the Emerald comes to mind — didn't create enough parking and had to look off-site, in part because of the huge excavation cost on a tight site. During Spire's long gestation, Menzies recalls, “We had to solve the parking problem. The market will not allow no parking. No one will buy.” Even if Spire's not parked on a one-to-one ratio, “We had to get close.”

But there are limits to the fancy garage, specifically the 5,500-pound vehicle weight maximum. The Sotefin system can handle a Tesla X — heavier than it looks, because of the batteries — but not, say, a Navigator, F250, Escalade, or long-chassis Suburban. (There's also a height cutoff.) Oh, and no motorcycles, either. But there must be a bike room, right?

Given that residential prices and demand are high in these late-pandemic times, as buyers emerge like stunned cicadas, Spire can perhaps afford to turn away those frustrated mega-SUV owners. The long-brewing project may have finally arrived in a market sweet spot, with little direct competition in Seattle. Koda, in the International District, is generally priced lower. The Emerald still has a few units left for downtown buyers. Westbank's First Light is under construction, as is Graystone, from Daniels Real Estate.

Bellevue, as ever, is a different story. Don't expect to see automated parking there anytime soon.