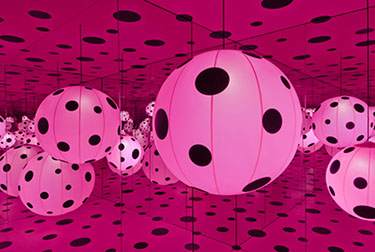 Photo by Cathy Carver, courtesy of Ota Fine Arts [enlarge]
“Dots Obsession-Love Transformed into Dots” is one of the immersive spaces in Yayoi Kusama’s show at SAM.

SEATTLE — SAM's new show “Yayoi Kusama: Infinity Mirrors” runs through Sept. 10, exploring the 65-year career of the Japanese artist, who was born in 1929, and still lives and works in Japan.

SAM called her a forerunner of the Pop Art movement, and said she was part of the 1960s New York “happenings” culture. The show includes five of Kusama's immersive infinity mirror rooms as well as works on paper, sculptures and large-scale paintings from the 1950s to the present.

Advance tickets sold out weeks ago, but there will be a limited number of tickets available each day at SAM as well as other events, lectures and activities around the city exploring her work.

Every Sunday starting July 2 there will be drop-in studio sessions at SAM with demonstrations by local artists exploring the themes and ideas in “Infinity Mirrors” and connections to their own work. Evening events inspired by Kusama are planned at the Olympic Sculpture Park to celebrate the show and the park's 10th anniversary.

Go to visitsam.org/kusama for information.