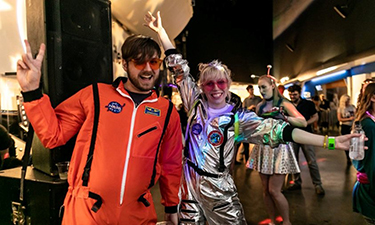 Image from Museum of Flight [enlarge]
Yuri’s Night parties and events are held around the world to honor Yuri Gagarin, who became the first human to venture into space on April 12, 1961.

SEATTLE — Yuri's Night is a 21+ dance party that will be held April 12 at The Museum of Flight — and this year also includes a preview of the traveling exhibition “Destination Moon: The Apollo 11 Mission,” which opens April 13.

Yuri‘s Night celebrates space — past, present and future — with music, tech and art. Yuri's Night parties and events are held around the world every April to honor Yuri Gagarin, who became the first human to venture into space on April 12, 1961.

The event runs from 6 to 11 p.m. in the Great Gallery, with a cash bar, food trucks and dance music by Noise Complaint. Virtual reality experiences and other space-themed activities are planned. General admission is $45 and includes two drinks. Tickets go on sale Feb. 5. Learn more at http://www.museumofflight.org.

The Apollo 11 Mission exhibition will be on view through Sept. 2.