Project of the Month: Sandburg joins a new generation of schools 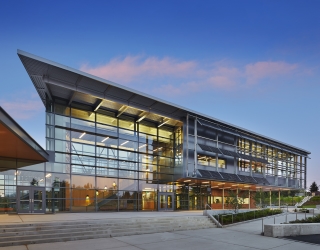 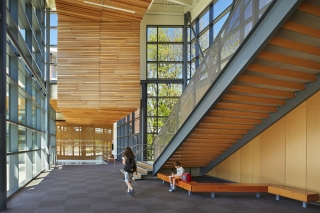 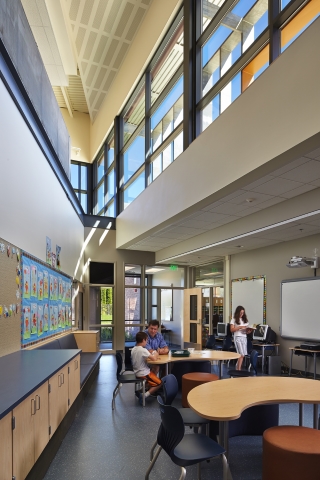 [enlarge]
The plan includes “neighborhoods” where students can be accommodated inside and outside the classroom.

It sits at the bottom of a slope along busy 84th Avenue Northeast in Kirkland. But Carl Sandburg Elementary School stands tall when you get up close.

It exudes confidence with its techy-looking wall system, complete with solar panels that double as sunshades for the high-ceiling spaces inside.

The plan of the building reaches through the site like something that grew there organically. A front entrance beckons from the center, where the building bends, with an open stairway inside the glass walls.

The outdoor learning environment is important. The project was completed while the old school building was in place, and now play areas and raised planting beds and seating fill the former school's footprint. Parking is tucked into the foot of the slope along the roadway, where it's relatively out of sight.

On the opposite side of the building, a grove of big-leaf maple trees was saved, buffering the school from nearby houses. A long roof settles low over this side, while the front side lifts up over the high-ceilinged library wing.

A new wave of schools

Lake Washington is the fifth largest school district in the state, spanning the cities of Kirkland, Redmond and Sammamish. Its first wave of buildings came in the 1960s and 1970s, at a time when energy and water resources seemed relatively unlimited and school space was needed quickly for young families buying into fast-expanding suburbs. Schools tended to be inward-focused, built of concrete block, with cavernous gyms and multi-purpose rooms — and double-loaded hallways. It was the age of “cells and bells” — the flip term for rigidly divided spaces and equally rigid schedules.

You might say Carl Sandburg Elementary School has higher expectations.

Forrest Miller joined the district in 1991 as facilities manager, and now is director of support services. He has seen district voters pass two levies — in 1998 and 2006 — that each built 11 new and replacement schools.

“Education is valued here,” said Miller. “The buildings reflect the quality they put into education.”

Carl Sandburg Elementary School, designed by NAC|Architecture, is among the last projects in the second wave. Each school has its own character, but there are similarities that peg them as millennial, part of a second generation of facilities that will pay the district back for decades in energy savings as well as community pride.

What a difference a generation makes. In this second wave of schools, building and landscape work together to create a complete environment for students. In tall, light-filled public areas with open circulation, occupants of the building can see each other and read the building like a book. Materials were selected carefully for beauty and durability as well as cost efficiency.

Like other schools in this generation, the plan of Carl Sandburg reflects a sea change in education. Classes are not isolated as they once were, visually or programmatically. Instead, classroom “neighborhoods” are clustered around generous and comfortable shared spaces. Teachers and kids mix between dedicated and common areas, sometimes sharing tools and programs.

More than ever, education is like design — project-based and collaborative. Technology has changed things, too. Big blackboards are gone, replaced in many cases by door-size screens with touch pad controls.

This trend puts teachers in a much more transparent and interdependent world, where they help students perform in their own learning story. Teachers are no longer “sages on stages,” according to Miller, and most would never go back to the old way.

These are changes in education, but there are other trends affecting Carl Sandburg Elementary School and other school designs.

One is the shared use of buildings. New schools like Carl Sandburg are designed to be occupied by the community for a number of purposes and by different groups like youth clubs. Through the school district, auditoriums and meeting rooms can be rented for events. New buildings are standing in as community buildings as well as symbols of community pride, and taxpayers' money goes further.

Cutting the cost of ownership

The other is sustainable construction. The long-term bottom line is important, including use of energy and water resources. Districts like this one are not only responding to the desire to reduce costs of owning the buildings, they are expressing the values of the community — including caring for the environment.

“LWSD is very strong in sustainability,” said Kevin Flanagan of NAC|Architecture. “(District parents) talked about a building that has a low cost of ownership, uses minimal resources ... and maximized educational benefits ... ‘It's the Sandburg way.' They kept saying that, said Flanagan. “It was kind of like peeling an onion to find out what that is.”

When they did, the district stepped up to be one of the first in the Northwest to use isolated concrete forms for many of the exterior walls at Carl Sandburg Elementary. According to Flanagan, these blocks are basically polystyrene Legos filled with concrete.

They've gotten much more widespread use in the harsh desert climates of the Southwest, but they are already yielding returns for Lake Washington School District. As monitored in the first year of use, energy consumption is half of that expected in a conventional school building. Their efficiency is based on the fact that the foam breaks the path of “thermal bridging” — the transfer of heat and cold that occurs with more solid, traditional materials like concrete blocks.

Beauty is sometimes a byproduct. Rain gardens are highlights of the landscape at the school. And those hard-working solar panels mounted on their own steel frame make shade very cool indeed.

“If I could get a “do-over” and go back to grade school, this is where I’d want to go.”

“The project introduces its users to timeless messages about nature and stewardship in a beautifully modern and simple yet sophisticated way.”