Project of the Month: Goodwill building goes from secondhand to standout

By CLAIR ENLOW
Special to the Journal
Photos by Ben Benschneider [enlarge]
Goodwill Training and Job Education Center is a standout along busy Rainier Avenue South. The prominent balcony grabs the eye, and the cistern tells the world that Goodwill cares about the environment.
[enlarge]
The cedar-lined entry is oriented to the center of the Goodwill site, not Rainier Avenue.
[enlarge]
A wrap-around balcony on the top floor looks out into a tree canopy. On a clear day, Mount Rainier dominates the view.
[enlarge]
The two-story lobby is a lively gathering place, with an open mezzanine and stair, a light sculpture, and an intimate view of the Bartram oak tree outside.

Seattle Goodwill has always stepped up to help get people jobs. Now it has stepped up to the corner of Rainier Avenue South and South Dearborn Street with a new building that creates an urban look and feel at the busy intersection.

In the Little Saigon neighborhood, tables and chairs are scattered on an inviting, live-in balcony three stories over the street. It's hard not to envy them. On a clear day, the lucky occupants of those chairs enjoy one of the best views of Mount Rainier to be had along the corridor.

The nonprofit Goodwill Industries International and its Seattle arm collect donations of used goods and resell them — from clothes to books to furniture.

But the new building is not for stuff. It's filled primarily with busy people — learning computer skills, building work habits and practicing the art of getting a job.

There are youth programs, but most are for adults. Some of the people are homeless, have criminal records or don't speak English, and there are programs to help with these challenges.

It's about “stabilizing personal lives,” according to Michael Jurich, vice president and CFO of Seattle Goodwill.

Increasingly however, Goodwill's mission includes the planet. There's a natural connection between environmentalism and the reuse of goods. It's supported by market research that shows more people choose to shop at the stores because they believe in recycling and keeping usable goods out of landfills, according to Seattle Goodwill spokesperson Betsy McFeely.

There has been no lack of ideas for redeveloping Goodwill's acreage along South Dearborn Street over the years. The most ambitious would have made it a mixed retail and housing center, but the recession put a stop to that.

In the meantime, Goodwill outgrew the one-story brick buildings it has occupied for many decades, and administration and training functions had to find space in far-flung locations.

The building site was primarily industrial, used for truck storage. “It definitely was a blank slate,” said Jurich.

The new building is an anchor and a portal for Seattle Goodwill. One of the main goals was to give job training more accessibility, visibility and dignity, said architect Rich Franko of Mithun.

“It's all part of an effort to bring (job training) into the bosom of Goodwill and have it all feel really natural,” said McFeely.

Setting the three-story building length-wise along Rainier Avenue was one of the first design decisions, and it sets up an entirely new relationship with the busy street. Low buildings, used car lots and strip mall-type buildings still line Rainier Avenue South, in highway fashion, to the south of the Goodwill site.

But there was also something there worth saving. A grand Bartram (hybrid) oak stands on the corner, in the middle of the sidewalk. The design team embraced it, pulling the footprint of the building back just enough to give the tree breathing room. Now people in the conference rooms on the top floor can see out into the canopy, rain or shine. “It's an exceptional tree,” said Dottie Faris, landscape architect with Mithun.

It might seem logical to put the entrance on the thoroughfare, too, but instead the design team chose to turn it inside, toward the center of the older Goodwill complex — with its large parking and donations area and its old brick buildings — and away from Rainier Avenue South.

The entrance to the new building opens onto Dearborn Place South, a street spur that serves the larger campus. Lining the long wall beside the entry is a substantial rain garden — a series of boxed-in terraces with lush plantings that enhance the emerging Goodwill campus without sacrificing its new urban style.

The building has re-set expectations for Seattle Goodwill. “We'd been in old buildings our entire life,” said Jurich. “We really didn't know the possibilities.”

And it shows what is possible on a modest budget. Architect Rich Franko explained: “It's a simple, orthogonal building with repetitive openings.”

Economical metal siding is punctuated with ochre fiber cement to accent the length of the facades. Yellow sills and headers bracket the view from inside on gray Seattle days.

Most of the length is filled with flexible classrooms and office space. However, “There are a couple of key moments,” said Franko. One of those “moments” — breaks in the repetitive pattern of the outer walls — is the entrance. One-story glass walls wrap around the building and the lobby inside, framed by projecting walls and ceiling. The walls inside are paneled with warm cedar, and the same material lines those walls as they project outward around the entrance.

Inside and out, eyes go to a large, glowing light sculpture by Seattle-based artist Yuri Kinoshita. It hangs beside a grand, open stairway — designed to draw people out of the elevators and into light and views — and get them moving. 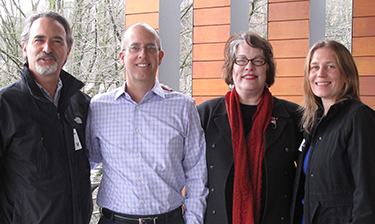 The other “moments” are at the south end of the building. Right there beside the exceptional tree is a standout cistern. It's two stories high and holds up to 10,000 gallons of rainwater collected on the roof.

There is plenty to flush toilets inside the building, and it also waters plants and recharges the ground water through the terraced rain gardens. The system saves about 80 percent of the water supply that would otherwise come from the municipal source, and even during a heavy storm there is little polluting runoff with this system.

Then there's that balcony — projecting from the top floor near the tree canopy and above the traffic, focused on the mountain. Also lined with cedar paneling, it works like a family living room, where business is sometimes done. Wrapping around the corner, it's open on two sides.

“It's a place to eat lunch, sit outside and decompress, and look at the view,” said Jurich. “I've gone out there to read contracts on a sunny day. “

“It sets us up for a wonderful future,” said McFeely.

“Wow. The team created a lot of value on a modest budget. Love the pop of ochre as a unifying element.

The Project of the Month is sponsored by the Daily Journal of Commerce and the Seattle chapter of the American Institute of Architects. It was selected with the assistance of architects Susan Jones and Dan Wilson.