Project of the Month: UW's new dorms show off their street smarts 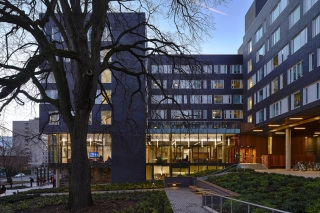 Photos by Ben Benschneider [enlarge]
Elm Hall was named after the massive tree that presides over the courtyard. 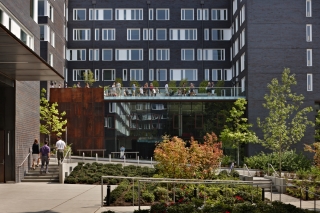 [enlarge]
Changing the spacing of the stock vinyl windows avoids the "punched window" look of a typical dorm. 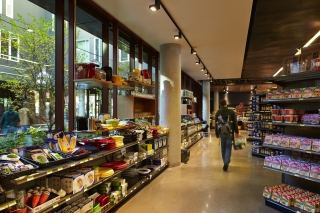 [enlarge]
A corner store serves students and the public. 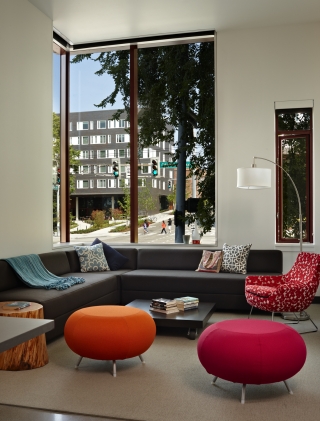 [enlarge]
Interiors don’t feel institutional and could be part of any multi-family building in the city.

A new neighborhood is rising at the University of Washington, and it isn't on the historic campus. By design, it's part of the city.

This is the first of a three-phase extension of the UW called West Campus. Three halls — Poplar, Elm and Alder — and Cedar Apartments cover much of three separate blocks near the intersection of Brooklyn Avenue Northeast and Northeast Campus Parkway.

In many ways, the units inside are typical of student housing, but outside these buildings don't read “dormitory.”

One reason for this is urban design. They are built to the edge of the streets. Walls and entrances meet sidewalks as in any urban mixed-use building. Residential units are on the upper levels, and ground floors are dominated by shared uses and open space. Courtyards are welcoming and accessible to the public much of the time.

All this blurs the boundaries between the campus — where students traditionally live and go to classes — and the rest of the city. You can't really tell where either begins.

“It's not the ivy-covered walls and the closed gates,” said architect Anne Schopf. “It's a more porous university, a nimble university.”

With this project, the institution is testing a new model for publicly held land that coexists with other uses in the city, according to University Landscape Architect Kristine Kenney.

It's an experiment that's working. The corner store, for instance, looks like any upscale urban grocer, and the public is welcome to shop. But it's operated by the University of Washington's housing and food services arm, which also runs the rest of the complex.

Public open spaces beckon from Northeast Campus Parkway. They include a small park cut into one of the blocks. At the center, branching over all, is a 100-year-old elm that once stood in a parking lot. Now it's the green heart of a neighborhood.

All of this ties in with changes in the surrounding streetscape that welcome pedestrians to a stretch of Northeast Campus Parkway that had been neglected for decades. On blocks around the student housing, roadways have been narrowed and sidewalks widened. Street trees have been planted and covered bus stops have been added.

The project had a very constrained budget so even though zoning would allow more height, the buildings are modest seven-story structures, with traditional “five-over-two” construction. Three are rated LEED gold; one is silver.

But they all are very modern in attitude. Simple volumes are carved out to allow open space and admit sunlight deep into the lower floor plates. Shared spaces like kitchens, lounges and study areas adjoin these light-filled areas.

Another reason the buildings cannot be typecast is the windows. They don't appear to be in a regimented grid, like other mid-rise apartment buildings with repetitive floor plans.

And that's no easy feat. “The problem with student housing is that there is no variation in room size,” said Schopf. “It can become very institutional, very quickly.”

Given the tight budget, varying room plans for interest was not an option. Instead, the spacing of stock vinyl windows is visually shuffled in a custom system that defies the usual “punched window” look.

Windows themselves are set within longer horizontal openings in the dark brick walls, disbursed with white aluminum panels that blend with the framing. Some of these openings wrap building corners. So the impression is not one of stock vinyl punched windows, but of a uniquely modern window system.

After the window system, it's the material palette that lifts the project out of the typecast dormitory role.

The bricks have a manganese-containing flash or coating that makes them subtly reflective and distinguishes the complex from the brick of the historic campus. Curtainwall is judiciously used on the ground level and the second floor.

The most arresting material is weathering steel. With their ferrous patina, large panels are artfully perforated in abstracted cloud patterns. Used outside and in, the rust forms an uneven protective coating that can be easily marked on — and just as easily erased by brushing. Along the street, the panels hide a myriad of intakes and exhaust louvers which would otherwise mar the view at street level.

If demand is any indication, the project is successful. It has been oversubscribed since opening last fall. In mid-summer, the cafe is full, and shoppers peruse the artfully laid out produce in the grocery. It's hard to tell if they are students or workers from a startup business in the U District. And that's the idea. It's all part of the neighborhood.

“The project manages to make a marriage of density and open space without compromising aesthetic detailing.” “The window alignments and exposure are examples of holding a parity between utility and design. (Materials) read as a nod to the nostalgia of blackboards and learning.”