That tapping sound you hear is calculator keys. Hundreds of numbers are being crunched as King County and the Nitze-Stagen/Opus Northwest development team hammer out a purchase and sale agreement for the Qwest Field north lot.

The document will refine the county's terms for development of the north half of the parking lot, a never-to-be-seen-again patch of vacant land next to the birthplace of Seattle.

Nitze-Stagen will largely determine the horizontal future of the north lot through the site plan. The vertical look — the one we will all see for blocks around — will be most affected by the decisions of Opus Corp., a large Minneapolis-based company that builds multi-family housing, office parks and shopping centers.

By meeting the county's preliminary terms (and more) in their proposal, the developers have already shown they care. “You don't take that opportunity lightly,” said P.J. Santos of Opus.

If negotiations are successful, the development team will buy just under four acres from the county for $10 million plus, and deliver an urban village. So far, the promised package includes 950 condos and apartments, a grocery store and 25,000 square feet of ground-level shops. Stuffed inside are 1,000 parking stalls — enough to replace the surface parking lost to the development, plus about one stall for every two new living units.

A cynic might say that when a corporate developer dances with bureaucrats, the natural result will be builder product. Creative investigation is costly, and bold, original design is risky. There are talented designers in both firms selected by the developers: Zimmer Gunsul Frasca (open space and urban design) and Weber + Thompson (architecture). But there is also a certain risk aversion reflected in the choices. The design-developer partners have worked together in various configurations over the last two decades.

But this is Pioneer Square, and Nitze-Stagen — a developer that's continuing to invest imagination and capital in the neighborhood — is shaping the destiny of the project.

King County Executive Ron Sims has shown leadership in securing a future for the “acres of asphalt.” And after the sales agreement is finished, the city of Seattle will become a more central player as the development team seeks permission to build 30 feet over the limits set by current zoning.

At this point, we can only hope that no one will lose and vision will win.

You might look for vision in the concept design package. According to the county's request for proposals, “the mass, scale, and architectural character should be apparent.”

What you'll see, at this stage in the game, is a two-piece Rubik's Cube that covers all the major bases of the county's RFP. It's all packed onto a footprint that is strictly limited by the 3.85 acres of land, which is really only half of the north lot. The other half is guarded by the home, boat and car show groups that want to keep using it as a staging area for their yearly events, and continue to threaten the county with lawsuits.

The concept is somewhat monolithic for an urban village. The sketches in the proposal show two blocks of buildings rising on either side of Second Avenue, which is extended from where it now stops at King Street.

Around each block, there is a perimeter of retail and townhouses around what appears to be a huge package of parking. This arrangement forms a two-piece base for the housing. Atop each base are two residential towers. From a modest distance, it would appear as four single buildings. 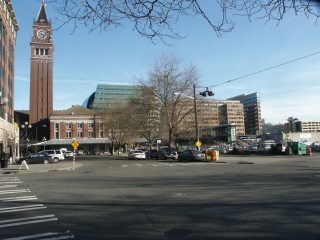 Photo by Clair Enlow [enlarge]
A proposal for funding improvements to King Street Station is now before the Seattle City Council, and will go to voters this fall. A mixed-use development on a platform over the tracks is being contemplated by Nitze-Stagen.

Again, packing in the program is of the essence — that means nearly 1,000 living units for villagers — in a building envelope that accommodates large setbacks for a view corridor. Units in the towers are served by very long, straight double-loaded corridors, a dark and depressing condition that can only be somewhat mitigated but not overcome without re-design.

On the bright side, the compact footprint of the residential towers allows for great views and fresh air for most units. There is plenty of rooftop open space, an amenity that finally will allow playgrounds in Pioneer Square and serve notice to young families that it's safe to move into the city.

We can be sure there will be a smart, hospitable streetscape, with wide sidewalks and plenty of character, along the extension of Second Avenue. It will blend well with the Occidental Corridor and improvements along King Street. There will be sensitive treatment of the Third Avenue extension, another street right-of-way next to King Street Station. If and when the intermodal future of King Street Station arrives, there will likely be a platform development by Nitze-Stagen over the railroad tracks that bound the east side of the north lot, and good connections with the International District.

“I'm a modernist at heart,” said Weber + Thompson's Blaine Weber. “But I think there is a way to create a contextual response… We want a building of our time. We can all celebrate the demise of the post-modern era.”

But that leaves open the question of architecture. And what we see in the conceptual sketches — a massing study dressed in glass, steel and touches of brick — is not the right answer. Not when we have nearby examples like Dockside Green in Victoria and the Vancouver Technology Park. Then there's Lloyd Crossing in Portland, a vision for a zero-impact urban neighborhood designed by Seattle's Mithun.

A number of Seattle developers, architects and city officials — including at least one from ZGF — have taken trips to Scandinavia, Germany and the Netherlands with Jason Antonoff and Patricia Chase of International Sustainable Solutions (http://www.i-sustain.com). They've come back dazzled by architecture that is coupled with environmental leadership and investment. The north lot consultant team includes Ove Arup & Partners, a multi-disciplinary firm which consults internationally on sustainability.

So what are the possibilities for private — or public — investment in cutting-edge features like photovoltaics or earth-based thermal heat exchange on the north lot?

Cal Hoggard of the King County Real Estate Services division manages the surplussing of county property, including the north lot. Hoggard said the county has already discounted the price of the land by about $14 million, down from the appraised value of close to $24 million that it would be if it were free of any encumbrances. Current encumbrances include the county's request for a development that meets LEED (Leadership in Energy and Environmental Design) gold certification — the highest standard for which there are any formal criteria.

But much of that $14 million can be accounted for in allowances for parking and staging for trade shows and other events at Qwest Field — accommodations which include the street rights-of-way in the development proposal, rights of way that flow into the sizable parking lot that remains next to the stadium.

According to Hoggard, negotiations for the purchase-and-sale agreement are proceeding in earnest, led by former county prosecutor Bob Stier and by Kathy Brown, director for facilities management. They are under real pressure. Based upon a 1998 agreement with the Public Stadium Authority, which looks out for consumer shows, construction must begin by July 1, 2008, or else the land that now belongs to the county reverts to the PSA.

Some long-time time proponents of a new neighborhood on the north lot, which include Pioneer Square residents as well as county and city officials, may just be happy to double the residential population of the neighborhood in one project. They look forward to a new haven for middle class families in a neighborhood that can seem — especially after hours — to be the domain of the indigent and intoxicated. Most new units will be market-rate, although 140 will be affordable, administered by the Seattle Housing Authority.

It's true that somewhere around three quarters of Pioneer Square's current residents are living in shelters or low-income housing, but this is not the heaviest burden on the Pioneer Square neighborhood. Arguably, that would be the overwhelming number of vehicle trips that start in the suburbs and terminate near Pioneer Square for the length of a game or show, and maybe a burger and beer.

After the county has done its job to develop the acres of asphalt, Nitze-Stagen, the city and Pioneer Square will have their opportunity to turn back the tide of suburban development.

As for the sketches in the proposal, “It's probable that everything will change,” said Nitze-Stagen's Kevin Daniels. “Because of the very nature of this project, it's going to be very public from day one.”

Daniels is convincing when he says he is looking forward to hundreds of meetings with local representatives. “I like that part,” he said. “There are some very intelligent people in this neighborhood.”