Design Perspectives: Urban square over light rail station should have a chance

With the groundbreaking for the Northgate link of the growing light rail system, there is one patch of ground that's getting a lot of attention this month.

It has captured the imagination of the University District's Phil Thiel — and many of his neighbors and friends. Thiel, a University of Washington professor emeritus of architecture, has his sights set on this land — or air rights, technically speaking — over the future U District Station, which will be located just off Brooklyn Avenue opposite UW Tower.

Supporters of his vision dominated this month's meeting of the Sound Transit board, and board members didn't seem to mind. Thiel, who stayed strictly within his allotted two minutes of testimony, brought a model showing an urban square or plaza of dignified, European city-scale over the future U District Station.

The model, of Phil Thiel’s design, was made by Gary Smoot. The photo of the model was made by John Stamets and enhanced (with figures) courtesy of Rolluda Architects [enlarge]
This image shows Phil Thiel’s vision for an urban square over the future U District Station. It extends the expansive, multi-layer base of UW Tower, crossing the street and serving as badly needed public open space in the developing neighborhood. In the foreground is an open walkway through to University Way and the University Bookstore, part of a pedestrian network that the developing transit-oriented neighborhood can begin to build around. At right, over the station entrance, the art wall can be glimpsed.

The board ratified Sound Transit's right to surplus and dispose of the property, and the text of the resolution mentions the possibility of conveying development rights to the University of Washington, subject to later approvals.

Final design for the project is years away, but Thiel and his supporters are worried that the UW is likely to use development rights to build many units of multi-family housing there. He specifically requested that the South Transit board convey the air rights only on condition that they will be used for open space.

Thiel and his supporters are right to be concerned. This patch has the potential to set the tone for a neighborhood that is set to develop rapidly — and smartly — in the coming decades. If it is not grasped, the potential for open space could be lost in a cascade of bureaucratic decisions and land deals.

The property in question is a 37,080-square-foot mid-block area over the future U District Station along Brooklyn Avenue. It's roughly mid-way between the UW campus to the east and Interstate-5 to the west.

It is important to note that little has been formally decided beyond the right of Sound Transit to dispose of the property (air rights) — not even the boundaries of the property to be surplused. The decision will likely be part of a complicated swap in which Sound Transit acquires a patch of land adjacent the station footprint that is owned by the UW, in exchange for the right of the UW to develop over the station.

The interests of the UW — which is chronically in need of more housing for students and staff — would seem to dovetail nicely with Sound Transit's obligations, and lead to the construction of a big mixed-use apartment building. 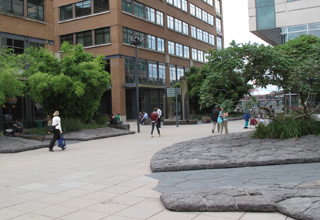 Photo by Clair Enlow [enlarge]
Urban open spaces like this one, near Sound Transit’s International District Station in Seattle, are well-used year round.

According to Sound Transit policy, which is tied up with federal transportation laws and policies, the air rights in question should be used for “transit-oriented-development,” which generally implies accelerated construction — including greater residential densities — within convenient distance of transit. Some people would like to interpret that to mean apartments, stacked as high as allowable, anywhere available. It's just not that simple.

Open space of all kinds is inextricably tied to TOD. In fact, it's not an exaggeration to say that open space is what drives TOD. The decision about open space an all-important and critical first step, because it can't easily be made after build-out.

Quality pedestrian-oriented public open space of any kind — green or paved — almost automatically becomes a stimulus for surrounding development and rising property values. That fact should not be lost on neighbors and local land owners who might be in a position to promote it, with appropriate leadership from the UW.

But there's also fear around open space. Anybody who's spent time near “the Ave”— University Avenue near the UW campus knows that homeless and non-college-going young people tend to cluster and loiter there, sometimes making trouble. Compassionate alternatives — along with balanced civility policies and good policing — should be a priority, and that won't be easy or simple in the university district.

But squeezing “undesirables” out of the vicinity through lack of public open space is not only futile, it's the ultimate self-defeating strategy for any urban neighborhood, because it will deprive that neighborhood of the best pedestrian-based framework for future development.

Instead, the University District should set its sights on open space that is graciously dimensioned, activated and urban. That description exactly fits the air rights over U District Station. At the Sound Transit board meeting, Thiel had two more distinguished activist-architects testifying in support of open space — Sue Alden and Peter Steinbrueck.

In addition to supporting Thiel's position, Steinbrueck urged the board to consider the future of the property as a joint decision between not just two parties — the UW and Sound Transit — but four, including the community itself, and the city of Seattle. They are all joined in a nascent planning effort called the University District Livability Partnership, which will lead the planning process on a number of provisions from urban design priorities to security and civility concerns.

The need for more public open space in the University District is already part of the neighborhood plan formally recognized by the city of Seattle. Some — within the UW and elsewhere — argue that there is bountiful open space in the form of the campus itself, and expanding patches of land on the shore of the ship canal to the south. As important as these are, they are mainly pastoral. For that reason alone, they are insufficient.

The air rights area over the U District station, on the other hand, is just large enough for an urban square of comfortable dimensions.

But it is much more, as envisioned in Thiel's model. Whatever you think of the design of UW Tower — formerly Safeco headquarters, built in 1975 — the base has a touch of mid-century majesty, with Corbusian legs and a Tsutakawa sculpture that begs for respect, and breathing room. Thiel's plaza would give it just that.

And that's truly only the beginning. A sweep of paving, combined with curb-calming strategies that blur the line between street and plaza, would extend the open and inclusive feeling — as well as the perceived dimension — of the plaza, to include the block-long stretch of Brooklyn Avenue and the base of the tower itself. It's a great opportunity for quality urban design — and, frankly, brand-building — that the UW and the community should not ignore.

But there are other ideas to seize upon here, before it's too late. In the form of a skinny and underused parcel, Thiel has identified an opportunity to pierce through the wall of storefronts along University Avenue just to the east, and create a galleria-type walkway between the plaza and University Avenue.

This would become a visible, active pedestrian connection between Brooklyn and University Avenues, and concurrently between UW Tower and the University Bookstore — a retail institution in the lives of students and many Seattle residents as well. Thiel said he claims as his ally a prominent University District landowner who controls many of the properties along that row of buildings, including the building in the proposed galleria-passage footprint.

This open space framework has a built-in complement of pedestrians. Incentives for facing it with restaurant space, plus outdoor seating, would complete the vision.

The least of Thiel's ideas — but still a good one — is an art wall. Cognizant of the vent stacks, passenger access and accompanying necessities of the underground light rail station to be located there, he has proposed a tall, flat art feature that would face the square and hide some of that. The mind races to the frenetic commercialism of Times Square in New York, but Thiel is rightly proposing something much more Seattle — like graphic installations that change yearly, based perhaps on a competitive art program sponsored by the University itself.

Maybe that competition could include some graffiti-style work, and even draw in a few of the young people who are otherwise just annoying land owners nearby. It's a very inclusive, mid-century idea. But here, it just might work.