Design Perspectives: Cities improving streets with paint, and political will

It's a long road to equity on city streets, for transit, pedestrians and bikes. Columbia City has made a start.

A four-mile segment of Rainier Avenue South in that Seattle neighborhood has been improved, thanks to some political will and a lot of paint. And at least one stretch of that road — Seattle's most dangerous — is a lot safer this year for pedestrians and cars, and faster for transit. 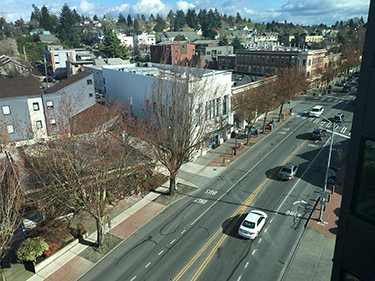 Photo by Clair Enlow [enlarge]
Columbia City today is safer for pedestrians — and faster for transit. Here at Rainier Avenue South and South Edmunds Street one lane has been designated transit-only. At other intersections, there is a left-turn lane in the center.

The big move was to reduce car lanes from two each way to one each way with one turn lane. That cut down on lane-changing to get around cars waiting to turn left.

In some blocks, the right lane is transit only, and stoplights allow buses to pull ahead of the queue at the intersection of Rainier and Edmunds. The net result is faster transit times.

At select corners there is a lot of paint, extending the pedestrian realm into the roadway. A tan color expands the pedestrian safe zone beyond the edges of the sidewalk, and results in a shorter crosswalk before getting to safety again.

Car trips may be slower now, but that is largely because of a five miles-per-hour speed limit reduction, plus better enforcement.

Underlying Columbia City's safety problem is a highway. Until 1992, Rainier Avenue South was officially a state route, even though it's also the main street of Columbia City — an intact streetcar suburb from an even earlier era.

The neighborhood has been rediscovered, and now is served by light rail. But until this year, some drivers sped along like it was still a highway — and clashed, literally, with pedestrians.

Revisions along Rainier Avenue South started with an emergency. A recent three-year period saw over 1,000 collisions along the street, many involving pedestrians and one involving a building in Columbia City — with over 600 injuries and two fatalities, according to traffic engineer Dongho Chang of Seattle Department of Transportation. There was a crash every day somewhere on Rainier Avenue South.

Drivers are paying better attention. Road rage, a legacy of the highway years along Rainier Avenue South, has subsided: It shows in the safety record.

Since the changes in Columbia City were completed in August of last year, the rate of collisions there has decreased by 30 percent, according to Chang. More data — about transit trip rates as well as accidents — is being gathered.

Bottom line: Sharing the road is good for people. It's good for business. And it's good for cars and drivers, too.

Rainier Avenue South is not alone in the struggle to adapt highway rules to city realities.

Too many city streets, from New York to Seattle, were designed according to the highway rulebook, with car lanes wide enough for semi-trailer trucks, Sadik-Khan said.

Experiments outlined in the book show that narrowing lanes on city streets by a couple of feet does not slow trip times. It frees up space for bike lanes, sidewalks and transit lanes. Even street parking spaces are wide enough for trucks, and they are another source of space for other uses. In many cases, there are just too many lanes altogether.

Fixing city streets is a matter of reallocating the existing width of the roadway. It turns out that safety for all — including drivers — increases when they share the road, and car trip times might not take longer. 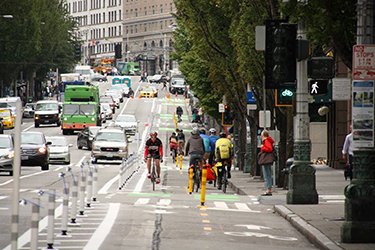 Photo courtesy SDOT [enlarge]
Along Second Avenue, more bicycles will be sharing the road this year. Since new bike lanes opened in the fall of 2014, the number of riders there tripled.

Among planners, Sadik-Khan is famous for spearheading a huge political feat: taking out a whole segment of New York City's Broadway, which is now closed to traffic as it crosses Times Square.

It was a bold experiment, and New Yorkers complained mightily. But no one would reverse it now.

Here's what happened. When the blocks of Broadway were closed, pedestrians filled Times Square. Taxi drivers hated it and said it increased their trip times, but monitors on their cars said it didn't. Turns out that on Broadway — which runs at an angle to the street grid — cars and taxis had spent most of their time at stoplights.

The initial capital investment for this change was mostly paint, but it stuck. It would have been hard to get approval for revisions in the streets with a vote. But after trial changes on Broadway made at the city level, New Yorkers voted with their feet. Businesses loved it. Now it's impossible to imagine that pedestrians would retreat to the sidewalks of Times Square without a fight.

These lessons are not lost on Seattle, which is running a few experiments of its own — and not just in Columbia City.

In Seattle, there is a lot of new green paint on Second Avenue. There, the voters ratifying the experiment are bicyclists. They've discovered the new two-way green bicycle-only lane from Pike Street to Yesler. Just to make sure the division is understood, posts separate it from car lanes.

Since it opened in the fall of 2014, bike riders there increased from 272 daily to 1,100, according to Chang. It has been so popular that extensions of the lane are planned.

Real estate in the street

At one intersection on First Hill, the neighborhood wanted even more. At University, East Union and Boylston, a large patch of pavement was given over to open space, becoming part of a small, national streets-to-parks movement.

In addition to painting some of the street for fun and safety, barricades were added. Then the finishing touches: umbrellas, chairs and planters. And lots of love. Based on early polling, neighbors like to gather and sit there, so the space is not likely to be given back to cars.

The simple truth is that in places where people actually want to live, real estate in the street is more precious than it was when it was first designed.

Leaders in booming cities like Seattle are taking second looks at the rights of way, and questioning the need to give 90 percent of it to cars — the standard for decades. There are other ways to allocate the space, ways that move many more people where they want to go. And sometimes they just want to pull up a chair and soak in the scenery.

From visionaries like Sadik-Khan to mayors like New York's Michael Bloomberg and Seattle's Ed Murray — plus engineers at every level — there is a new willingness to change the rules of the road. They are making city streets a more welcoming place for people — and getting more people where they really want to go.

And it doesn't take billions of dollars and multiple levels of government. Sometimes all it really takes is paint.