Twice a month there's a slide show in the commission and board rooms at Seattle City Hall. If we could watch them all together, we'd see a long-running feature illustrating the development of Seattle, parcel by parcel.

Sometimes the shows go on in front of mostly empty chairs or someone snoozing peacefully, but occasionally design review meetings are dramatic, literally packed with people worried about their view or parking spot.

That's how design happens in Seattle. It has to go through design review. Over the program's 20-year life, more than 1,500 designs for buildings have gotten critical scrutiny by an appointed, neighborhood-based board as part of getting a master use permit.

There are seven of these boards, covering that many districts in the city. The program applies to most private multi-family, mixed-use and commercial buildings. Public buildings go through the Seattle Design Commission. 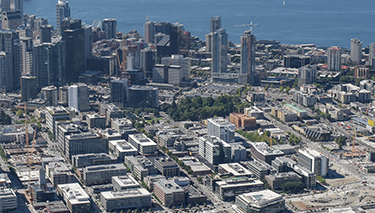 We'll never know exactly how much better Seattle is for all this effort. It's definitely better, but some of the best architects don't like the program. When asked what's wrong, they usually boil it down to this: Design review may prevent the worst from happening, but it tends to stifle great design and prevent the really good stuff from getting built.

Lisa Rutzick is listening. She's a planner who has been with the city for 15 years and oversees the design review program — and wants to improve it. New online tools should help busy architects participate.

You can comment on the program through Friday at an online open house by going to http://bit.ly/1elEZf8.

There's also a new way to offer input on individual projects. To keep the public more informed, DPD has launched a new website at http://tiny.cc/hxsk1x that puts information about projects in design review within easy reach. Comments are invited, and collected, for each project.

Rutzick said comments on the program will be used to make changes so that it promotes better design and functions more consistently, efficiently and predictably. In the meantime, the project-tracking website makes the whole process more open and accessible.

Whether or not design review is working well, it is working harder and faster than ever before. In 1994, the first year it took effect, only 14 projects came before the boards. Last year, 192 projects were reviewed. All indications are that the number will double this year.

Our boom just keeps on going, and now it's running on overtime. There's no exact count, but over 100 projects are somewhere in line for approval through design review.

Fresh faces appear on the boards every year. Each November, as review board vacancies come up, Rutzick takes applications and interviews applicants, joined by other staff members. They make recommendations to the mayor and city council, who ultimately appoint and confirm new board members for a two-year term.

The only requirement: members must live in Seattle. That said, professional expertise in design and construction is an advantage in selection. Plus, “It's a somewhat self selected group of people who are interested,” said Rutzick.

No matter how you calculate it, the reviews add some cost to every project covered. Taxpayers cover the cost of the program itself, but people serve on the boards for free. Meetings happen about twice a month and take most of the day, according to Rutzick.

Now there's a backlog of projects waiting for review, and sometimes boards are called in for a third meeting. As far as Rutzick knows, no resignations have resulted.

“They are almost always incredibly devoted to the program and the topic,” said Rutzick, but “I think there is some fatigue.”

Board members don't work in a vacuum. They've got a book of city-wide guidelines revised in 2013 with the help of architect and planner Lesley Bain, formerly with Weinstein A|U. There also are 18 separate sets of guidelines adopted by certain neighborhoods as part of the comprehensive planning process.

The stakes are high. Typically there's a lawyer in one of the seats, hired by the developer. Sometimes meetings are packed with angry neighbors who want the project stopped or completely redesigned. After the show, board members deliberate, write a list of requests, and then typically review the project again before approving it.

It's the client, stupid

Seattle's review program is evolving and doesn't work perfectly, but it's the best we've got. Anyone who has sat through review sessions can see that they win important benefits for the environment, and pedestrians.

They can soften the impact of design crimes and misdemeanors, but they can't correct zoning laws. They leave room for design teams to interpret the intent of zoning laws and design guidelines, and some good new ideas get through.

Good, bad or ugly, each eligible project gets its show. Design teams steer between the twin hazards of critical directives from board members and active protest from neighbors. Some of those directives yield “checklist” architecture — pasted on features like a step-back here or a brick wall there — just to be responsive and win a permit.

And all the boards and design teams must sometimes work through public comments motivated by anti-growth sentiment and NIMBYism.

Before there is ever a design team, there is a client. When you delve into the question of what makes a great addition to the city, that's the one thing designers of award-winning architecture say, again and again.

Regardless of other factors, including the budget, the analysis of a good-to-great project always begins and ends with this.

The project can be large or small, public or private. The client can be an individual or group. A good client may not even be the legal owner, as long as the owner has their back.

The ideal client is not a pushover for designspeak, and they are taking care of the bottom line. At the same time, the ideal client likes architecture and knows enough about it to be confident about decisions. They are thinking about the long term, future users, and future generations. They have high standards and real excitement about the project.

The best review boards are just good clients. Because of zoning laws and the design guidelines from which they work, most projects already deliver some goods when they get to the meetings. Then board members deliver, working on behalf of the real client: the citizens of Seattle.

Clair Enlow can be reached at clair@clairenlow.com.