By CLAIR ENLOW
Special to the Journal
Photo courtesy DSA [enlarge]
For the second summer in a row, Occidental Park is filled with people, thanks to a new partnership between the city, Downtown Seattle Association and other groups.

200 Occidental will open its doors in two months, and it will be a fine address. That may not seem like high praise for design, but it is because the building is a key piece of a bigger achievement: a four-decade-long project called Occidental Park.

Thanks in part to 200 Occidental, the park is now truly the heart of Pioneer Square.

The new building, developed by Urban Visions and designed by Mithun, just happens to be the new headquarters for Weyerhaeuser. It's also the long-missing edge that makes the park click. Modern architecture has arrived, meeting stately trees in a precious historic district, and it's like they've known each other forever.

In a way, they have. Design lead Bill LaPatra of Mithun has had a long relationship with the site, going back to a 1981 studio project at the University of Washington that focused on the park and its edges. The questions then were about designing a modern building in a historic district. Now, 25 years later, 200 Occidental is LaPatra's and Mithun's answer.

The three brick walls off 200 Occidental that face away from the park combine subtle historic colors, to blend in with the historic buildings. But the west wall, the one facing the park, is glass. It lines up perfectly with a row of mature, stately London plane trees, the signature tree of Pioneer Square.

This particular row of trees has been lonely too long, standing between a grand urban plaza in the historic neighborhood and a very stubborn patch of longtime surface parking. Now that the building is there, the lush canopy of those trees is reflected in the glass wall of the new eight-story building.

Just inside 200 Occidental, 13-foot-high office interiors take full advantage of the site. The second floor corporate offices are like box seats in an urban theater. Through clear glass, an open stair in the middle faces the main hall entry to the Grand Central Building west of the park. Activities in Occidental Park — some programmed, some not — can be seen through the branches, which display the seasons, from leafy green to blazing orange to bare.

From the upper floors, the eyes of the lucky occupants can skim the treetops, and from the generous roof deck on the eighth floor, they get more than 180 degrees of sweeping views over Elliott Bay, downtown Seattle and the stadium district.

The park below is now truly the heart of Pioneer Square. For two summers, it's been full of people most days. There is often a group at the ping-pong table or the giant chessboard. Tourists are there along with a scattering of homeless people, and they all share the park with a new influx of those living and working in Pioneer Square. This fall, the 800 occupants of 200 Occidental will be passing through or lingering, too.

It was always meant to be that way, but it took a long time. Architect Ilze Jones, as founding partner of Jones & Jones Architects, Landscape Architects and Planners, chose the trees back in the early 1970s. She knows there used to be a hotel on the east side of Occidental Park, where 200 Occidental now stands, but it was taken down in the 1950s for mysterious reasons. 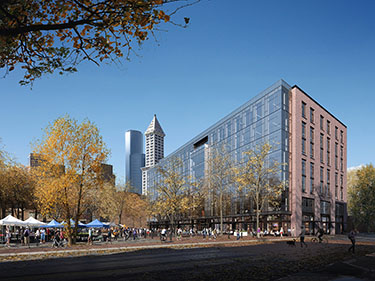 Rendering by Mithun, courtesy Urban Visions [enlarge]
Starting this fall, 200 Occidental will add 800 people to the daytime population of Pioneer Square. Mithun designed the building with a modernist facade that brings a fourth side to the historic square.

“We basically had no edge (to Occidental Park),” Jones said. “We proposed three rows of London plane trees to form the enclosure.”

The trees grew and grew, but the population of the park was sparse and very skewed to the homeless groups who are sheltered nearby at night. Several years ago the city made the momentous decision to remove some of the mature London plane trees, opening up the middle of the park to the sky. Near the same time, the rough historic brick paving was replaced, making it a lot easier to walk through.

In the past few years, big changes have come to Pioneer Square. Redeveloping the north lot of CenturyLink Field has brought an influx of residents to the neighborhood. Gaming companies discovered Pioneer Square's charms and brought in tech workers. They all began flowing through the walkway near the eastern edge of the park.

But LaPatra said, “The magical moment was when the DSA took over the management of the park.”

Last year, the city of Seattle partnered with Downtown Seattle Association — along with the Alliance for Pioneer Square, Seattle Parks Foundation and Friends of Waterfront Seattle — to lure people in.

Inspired by the success of urban places like Bryant Park in New York, they set out on a slate of changes that had been proven in other urban plazas: movable tables and chairs, stages with regular entertainment and food for sale. When those things were in place, people showed up. And they came back.

“It changed overnight,” said Leslie Smith, director of the Alliance for Pioneer Square.

The key is a combination of safety and surprise, according to DSA CEO Jon Scholes. There's 24-hour security in Occidental Park, thanks to a seamless handoff between city police and a private security firm.

And there are the ballroom dancing lessons, pie-eating contests and open-air art studios.

And food trucks. Parked in a row in front of 200 Occidental, they add a number of choices for paying visitors who just want to have lunch in the park. They also add a layer of messy vitality that works. But it makes the job of leasing the ground floor of 200 Occidental to restaurants harder, according to Broderick Smith of Urban Visions.

Here's hoping that the magic lasts. As a critical mass of park users is reached, there may be a natural balance of trucks and retail, including the cafes inside the Grand Central Building. But the importance of having a building on the east edge, instead of a parking lot, cannot be overestimated.

In the long run, the park will find its own more relaxed and more urban pace, watched all day, from all sides.

Ilse Jones is on the south side. She looks out over Occidental Park from her office at Jones & Jones, glad to see new investment in a place that has not had enough of it as long as she has been there.

Even though some of the original London plane trees are gone, she's glad the ones remaining are getting the attention they deserve. “London planes are very urban,” she said.