AIA Project of the Month: Fire Station 10: A stately civic presence and, sometimes, a beehive 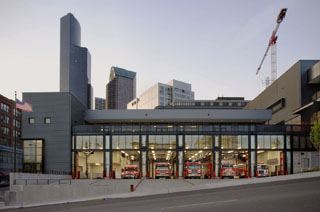 There are not many clues telling you when you are near Seattle's new Fire Station 10, which is also the city's emergency operations center and fire alarm center. It's not a place for dropping in. Everyone who has business there — full time or in an emergency — is supposed to know where to go. The street doors are almost always locked.

In an earthquake or other disaster, natural or manmade, this place will become a beehive of activity, a nerve center for decisions and communications that everyone hopes will work.

There are a number of reasons for restraint in its design. In a security-conscious world, the building itself should not shout out too much. Space has to be flexible. The very nature of emergency response is continually evolving. Although work is done by dedicated human beings, operations rely on new technology and focus on changing threats. Above all, the center has to be durable and structurally capable of withstanding shocks to the structure and its systems.

All of this might result in a dull and heavy concrete box. But as project architect Jon Mihkels of Weinstein A|U points out, Fire Station 10 is also a civic building, sitting where two street grids meet at the gateway to Pioneer Square and downtown Seattle.

So, “It's security aware, but not security-driven,” he said.

From the outset, the project needed a recognizable element. That's why design principal Ed Weinstein likes red trucks. “Fire vehicles are very iconic in their own right,” he said.

The name Fire Station 10 itself honors the historic station in Pioneer Square. Now, after moving a few blocks to its new home, the older building at 301 S. Main St. still serves as fire department headquarters for the city.

The site plan was largely driven by the need to accommodate trucks, from their turning radii to their need for level ground. Everything hinged on the ability to drive through the apparatus bay — entering from one side and exiting on the other — which was a very basic priority for the fire fighters. Now they enter the block from Fourth Avenue South, but the doors open onto South Washington Street, where the trucks can turn east or west but also easily head south. This pattern pushed the fire station itself, with its large apparatus bay, to the west side of the block. The east side belongs to the emergency operation center and fire alarm center, where calls are taken.

The fire station visually anchors the block, and is the public face of the project. The six new rapid-opening doors for the trucks are not just red — they are bright red against an expanse of deep, receding gray. Their redness is matched by a phalanx of eight steel figures along the sloping sidewalk outside. “Sentinels” is an art work by Gloria Bornstein, who led the team of eight artists participating in the project. Red is also the color of public safety in both Asian and Western cultures.

The building itself is a combination of clearly readable volumes, each with its own programmatic job. The carefully orchestrated details, combined with art installations on the street, give the building civic presence and human scale. 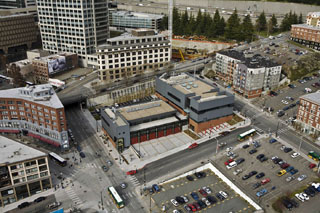 A deep reddish masonry plinth grounds the facility, joining it to the earth and to nearby Pioneer Square.

Fire Station 10 is really part of two communities, since it also faces the International District. With its clean, modern lines and fine details, it aims to fit with Asian cultural traditions.

Except for spots of color on the other art works, the rest of the facility is a study in gray and black. Window openings are subtly shaded with dark “eyebrows”— metal plates that project from the surface and give the exterior depth and mystery.

Fire Station 10 is really three facilities in one. Along with the fire station and fire alarm centers there is also an emergency operations center that would become the seat of city government in an emergency.

The six-bay fire station operates round the clock. There are decontamination facilities, living quarters for the crew and disaster supply storage, and a resource management center for the entire department. It also serves as the city's primary hazardous materials response unit. The fire alarm center, which is staffed continuously, includes a 911 dispatch area, sleep rooms and staff support rooms, a training room, server and radio communication equipment rooms, administrative offices and support spaces, and a police 911 back-up facility.

Moving the emergency center was accomplished with a lot of planning plus a flip of a switch, with one team at the old and one at the new, according to Debra Lewis of Seattle's Fleets and Facilities Department. But it was a long way in terms of comfort and function from Seattle's old emergency response facility, which was crowded into Fire Station 2 in Belltown. That space will now become a health and fitness center for the fire department. 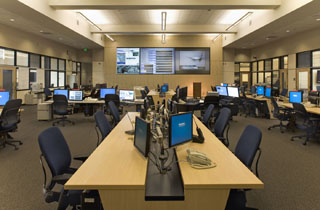 Photo by Michael Burns [enlarge]
In an earthquake or other disaster, natural or manmade, the emergency operations center will become a beehive of activity. Long bays of screens and communications equipment stand ready for personnel to convene and hook in.

It was crowded before. Sleep space was in the server room, amid banks of computers and cabling, according to senior dispatcher J.R. Wingett. Working 24-hour shifts is a different proposition in the new space.

“It's not a big gain in overall square footage,” she said. “But the use of it is so much better.”

The emergency operations center itself is bracketed by thick concrete walls. The need for structural hardening might have made for a very dark workplace. But there are generous skylights in the fire alarm center and along the sleep room corridor. And there are also views from some offices, eating areas and decks.

“Getting a slice of the outside world is great,” said Wingett.

Designing a building with a program as complex and specialized as Fire Station 10 required several different kinds of architectural expertise. Although Weinstein A|U also designed Seattle's West Precinct police station at 810 Virginia St., the firm is far from specializing.

“We relied on the experience of our associated architects,” said Weinstein. Those include Ross Drulis Cusenbery Architecture (for building programming) and TCA Architecture-Planning (for fire station design review).

As lead designer, it was up to Weinstein A|U to “create the essential diagram, organize the building and package it,” explained Weinstein, who is not afraid to use the word “generalist” in describing his practice. The generalist, he said, looks at things with a fresh eye — but not a naive one.

“We listen well from a cultural point of view,” he said. “We work from the outside in and the inside out simultaneously.” 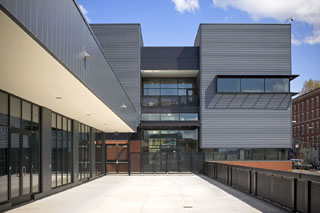 Photo by Michael Burns [enlarge]
The expansive deck stretches over the fire station bays, adjoins the kitchen and provides informal meeting and eating space for firefighters and other personnel.

In fact, the site itself was a brownfield. The long time parking lot once held a gas station. The cleanup excavations were so extensive that a section of Yesler Way just behind the building had to be shored up. The site was chosen, in part, because it is seismically stable relative to alternative locations, including the old Fire Station 10. It also held great potential to set the city on the course to more sustainable design.

The emergency response facility is prepared for 72-hour operation in the event of power failure. With such an energy intensive and safety sensitive building, the demands for expertise in air quality, energy conservation and material recycling were extraordinary. 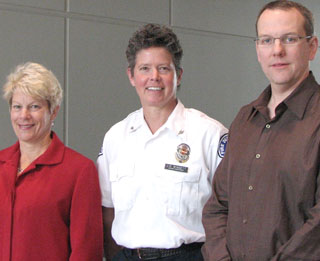 Taken simply in terms of environmental gain for the city, the block has come a long way. Prior to construction, it was completely paved over. Now, there are thousands of square feet of open space, much of it covered with native plantings. Green roofs, which cover approximately half of the facility, also slow water and reduce runoff before it enters the storm system, and reduce heat radiating from the building. Limited parking behind is a placeholder for future expansion.

But the real water story is hidden below the surface, where a special basin and pump system is built to store enough water to meet 100 percent of demand for fire truck washing and landscape irrigation. It is fed by drainage from non-driving surfaces and runoff, and also by water from fire drills.

The project has achieved LEED silver designation. Better yet, Fire Station 10 shows that it's not necessary to choose between safety and sustainability. When it comes to readiness, a great environment is a good place to start.

The Project of the Month is sponsored by the Daily Journal of Commerce and the Seattle chapter of the American Institute of Architects. The April project was selected with the assistance of architect Leslie Bain, arts director Cath Brunner (4Culture) and architect Don Brubeck. For information about submitting projects, contact Stephanie Pure at AIA Seattle at (206) 448-4938, or stephaniep@aiaseattle.org.