Project of the Month: Putting 'green' and parking under one roof 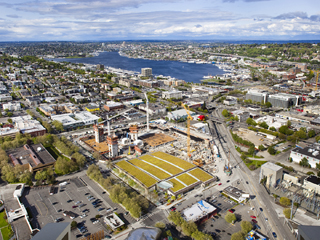 Photo by Lara Swimmer [enlarge]
The 1.5-acre living roof looks like a field from the air, and like a field, it is a rainwater sponge and provides habitat for birds and insects.

The Seattle Center Fifth Avenue North Garage is not just an urban parking structure, it's a revelation. This garage is a people place. Using it, even for the very first time, is — well, easy.

It's easy to find — and easy to get into — from surrounding streets. It welcomes like a destination, yet you can easily tell it's a garage. Once you park and get out of the car, it's easy to see where to go next, whether it's to work at the Bill & Melinda Gates Foundation or to play at Seattle Center.

When it's time to leave, it's easy to get out — even when almost everyone is leaving at once.

The multifaceted structure faces busy Fifth Avenue North across the street from the center. It has two sets of entries and exits for cars and people: one on Harrison Street and one on an extension of Republican Street to the north. The project is a partnership between the center and the Gates Foundation, whose new headquarters campus is under construction next door on the north.

The garage is flooded with natural light at every level and intuitive to navigate. Floor-to-floor heights are 20 feet, and the paved “floors” are really sloped, part of a system that spirals up and down. With each 360-degree turn, each car goes up or down two levels.

“The whole floor is a ramp,” said architect Jeanne Iannucci, a principal with NBBJ, the firm that designed the garage.

There are no internal walls, and columns are 60 feet apart. It's more open and less confusing — as well as more efficient — than a shorter-span structure.

Lighting and way-finding are further eased with another feature: a five-story atrium-like pavilion that serves as the vertical circulation for pedestrians going to and from Fifth Avenue North and the center. It brings light and air from the roof deep into the underground floors of the garage.

Visible from the street, the pavilion is dominated by colorful glass art by Dick Weiss that is integrated into the outer glass wall structure. Stairs that serve center visitors spiral around a glass elevator, which is served by bridges crossing from stair landings.

This lively column of open-air circulation is notched into the plan at the corner of Fifth Avenue North and Harrison Street. It is joined at street level by an espresso shop and café seating, and it opens into a south-facing public plaza. The plaza is furnished with sculpted granite benches and shady maples, which are fitted with large grates at the base.

While the project gets a lot of attention at street level, it really stands out at the top where a 1.5-acre living roof is planted with meadow species. The roof looks like fields from the air, acting as a rainwater sponge and providing habitat for birds and insects.

Inside the top level of parking, the high-vaulted roof is cut with a dramatic skylight. The space is so attractive that the center has entertained the notion of using it on weekends for a farmers market.

There's a lot riding on this garage. It is in the middle of a multi-phase planning and development effort, not only for the center but for its partner in parking — the Bill & Melinda Gates Foundation.

The center, which began as a World's Fair site in 1962, has staked its long-range planning and budget on becoming a regional destination as well as a local one. Its heartbeat is its 18 arts and theater venues. Getting people in and out safely and efficiently is a high priority, according to the center's redevelopment director Jill Crary.

All this calls for parking. Much of it has been accommodated on 12 acres just to the east of the center. That was just being land banked until a development partner could be found, according to Crary.

Then came the Gates Foundation, the largest philanthropic organization in the world, bringing “great synergies” to the center, she said. The foundation's campus was also designed by NBBJ.

The parking garage, completed two years ago, is the important first step in the redevelopment project, consolidating parking for the center and foundation into a reduced footprint of two acres. 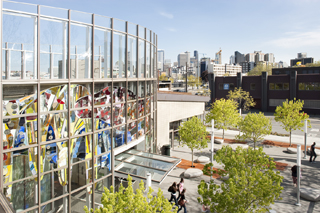 More importantly, it is a kind of de facto welcoming place for both, offering a spot to park the car, meet and linger, and visit one of the storefronts to see what the foundation is about and what its grantees are doing.

In a condominium-type arrangement, the center and foundation each own parts of the garage building. Through its wholly owned partner Iris Holdings, the Gates Foundation covered about 70 percent of the cost, and also participated in the project as a design client. Because of the center's status as a public entity of the city of Seattle, the garage was subject to review by the Seattle Design Commission, with substantial input from surrounding neighborhoods.

“The design of the garage was a fantastic getting-to-know-you experience,” said Crary. 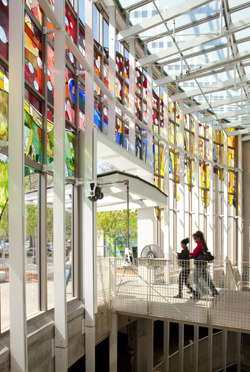 Photo by Lara Swimmer [enlarge]
The bridge from the parking garage to Fifth Avenue North and Seattle Center leads past colorful glass art. The garage is a de facto front door to Seattle Center.

In addition to the steep environmental goals of the design, Crary and others with the center were hoping this garage would do something unlike almost any garage she could think of — empty quickly, even when packed with patrons from several evening venues. It does, she said.

You might think a parking garage is an unlikely candidate for environmental recognition. But the Seattle Center Fifth Avenue North Garage is a winner. It's one of the first freestanding garages to achieve LEED gold status.

It has many of the same environmental creds that any work of architecture might: a pedestrian-conscious, storefront-lined street side, and generous light and air inside.

But it's a parking garage, after all. It accommodates large numbers of gas-burning vehicles in an age when parking spaces — especially in the center of the city — are decreasing as a matter of policy and fact.

But not too fast. The center will pursue its long-term car-reducing diet, according to Crary, by allowing surface parking spaces around the perimeter to decrease as development occurs.

In fact, the project decreases the total number of stalls for the center, even while it consolidates acres of asphalt surface parking into a sixth of its former footprint. Also, the garage's green roof is the largest in the region, with a positive impact on stormwater. 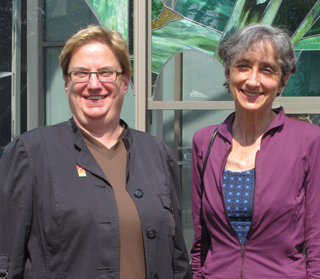 The Seattle Center Fifth Avenue North Garage has a long future. It is built to last 100 years — with or without cars. Iannucci imagines the garage designed in her office as a multilayered, open environment with many possibilities, from markets to staging for street events. And it's adaptable, she added. Removing sections of two floors could result in new, taller areas to complement the high-vaulted space on top, opening up even more possibilities.

While the garage accommodates the vehicles that have surrounded the center for decades, it might also be part of a future where cars are cleaner and scarcer. That makes it truly sustainable.

“Great use of natural light, bringing it deep into the subsurface parking structure. We hope somehow that people will get to visit the handsomely undulating green roof.

“It is a big step from the parking garages lining Mercer from an earlier era to this major new piece of infrastructure, one which pays close attention to energy use and the user’s experience.”

The Project of the Month is sponsored by the Daily Journal of Commerce and the Seattle chapter of the American Institute of Architects. The project for August was selected with the assistance of urban planner Ray Gastil, architect Sandra Mallory, and architect Michael Wishkoski. For information about submitting projects, contact Stephanie Pure at AIA Seattle at (206) 448-4938, or stephaniep@aiaseattle.org.