Project of the Month: Art Stable: A magic box for South Lake Union 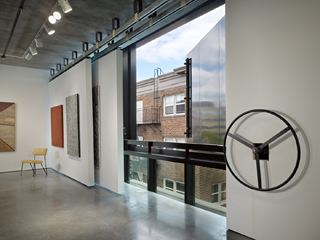 Photos by Benjamin Benschneider [enlarge]
The wheel that controls the window is a design feature inside the live-work units.

For four of the six stories, the wall system of this slim multi-family structure is identical. The pattern is broken only when the large hinged windows are actually opened.

Viewed from the street or from neighboring buildings, it's uncanny — as if someone larger-than-life has been playing with a magic box rendered in sculptural steel, with moving parts. But don't worry. It's very tough.

The giant in this case is Tom Kundig of Olson Kundig Architects, who has gained an international reputation for his buildings with moving parts, or “gizmos” as he calls them. They typically involve a hinged door, window or skylight that is opened with the mechanical assistance of a prominent crank or wheel — which is itself a work of art.

At Art Stable, the gizmo goes one better. Repeated on one floor after another, there is a vertical stack of them, one in front and one in back. In the front, the large window panels swing out to take in the city — views, air, sounds and all.

But the real fun at Art Stable happens on the alley.

On each floor in the back, solid steel panels cover openings large enough to accept a craned-in grand piano. They are huge but can be moved by hand using a vertical wheel on the wall, also carefully wrought in raw metal.

The view from below is stunning. All the doors swing from a massive hinge that runs from the top to the bottom of the building.

For all the recent investment, South Lake Union has some architectural dead zones. It's rich with new open space infrastructure, historic industry and a streetcar, but poor in bold new architectural ideas. Point32, the developer of Art Stable, is helping to turn that around.

“This is the future,” said Chris Rogers, co-founder of Point32 and previously project manager for Seattle Art Museum.

The mixed industrial, commercial and residential neighborhood will continue to change. But like a piece of monumental public art, Art Stable is built to endure.

“We designed a building to last for a couple of hundred years,” said Kundig.

In the meantime Point32, which also acted as developer for Cascadia Center — the super-sustainable new home of the Bullitt Foundation — is changing some cherished notions about downtown real estate.

When condo buyers come to downtown neighborhoods, they're typically willing to pay more per square foot for their real estate than in outlying neighborhoods. Developers, lenders and investors also demand a typical package of “amenities” that includes the ubiquitous fireplace and, of course, the deck or balcony. But the live/work units at Art Stable relate to the outdoors in a new way.

Three of the six units were presold, and one is still for sale. With unit prices upwards of $2 million, buyers are not starving artists. All the current residents moved out of single-family homes in the area, according to Rogers, and each one wanted to create a unique space for living and working. Private studios or galleries are a part of the mix in almost every one of the presold units.

“Consistent across all of the buyers is a creative gene,” said Rogers.

What they bought was a completed shell. Interior work proceeded according to the particular needs and desires of each new resident, but most have kept a large part of the space open. With floor-to-ceiling dimensions of 11 feet, the units vary in plan size. Three are full-floor units with 4,000 square feet. Some borrow additional space from an adjacent floor, and others occupy as little as two-thirds of the floor plate.

Art Stable looks out on Yale Avenue North, with the REI flagship store and Alley 24, the mixed-use block of infill and renovation, just two blocks to the south. The waterfront park on South Lake Union is five blocks away. 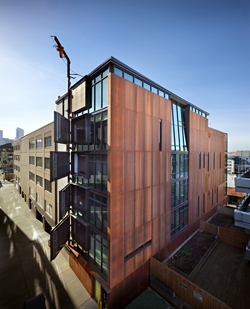 [enlarge]
The massive panels on the alley side of Art Stable can open to install a large sculpture, grand piano or sofa. The full-height hinge is topped by a winch for hoisting. The modern setup was inspired by historic hoists found on Dutch houses.

These urban interventions stand among a scattering of older industrial buildings, including an old truck assembly building, now used as a private school, right across the street.

The project is designed to take advantage of the “Seattle mixed” zoning designation in South Lake Union, which honors historic land use patterns and accommodates modern labs and similar activities. Rogers said his company always conceived of Art Stable offering a variety of uses.

The project may be full of new paradigms, but no one left their cars behind. There are two stalls for every unit but they are discreet, tucked into the building at the second level behind an orange screen, leaving the ground floor to relate directly to the street.

A specially fabricated 14–foot steel front door swings into a very straight-forward entry, with a corridor, mail and elevators. A second door opens to a working artist's studio, which occupies half the ground floor. Exposed concrete and steel dominate throughout.

“You are educated about how the building is put together the moment you enter it,” said Rogers.

The 80s-era wood-sided multi-family building to the north has deck and garden atop the first story, providing air and a near view from the generous openings in the metal-sided Art Stable. 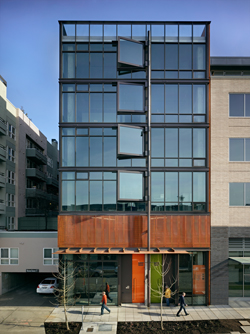 [enlarge]
Art Stable’s large window panels swing out to take in the city: views, air, sounds and all.

Point32 has borrowed from the urban design playbook for preserving open space, buying air rights over the neighboring green roof to the north. It balances the overall box-like shape of Art Stable with a complement of plantings and multi-level complexity, and preserves views from the long, steel-clad north side, with its vertical swath of glass.

Art Stable's green creds include a heating system based on a geothermal loop, with runs through 70 structural piles under the building. It should save residents lots of money over the next hundred years.

For evolving Yale Avenue North, the century should be a good one.

“Adds welcome richness to the SLU neighborhood, especially for an infill typology. Materials are rich in texture and color, and intriguing from up close and from a distance on I-5.

“The hinge door opening makes you want to play. On the serious side, there’s the innovative geothermal heat pump system in the foundation system.” 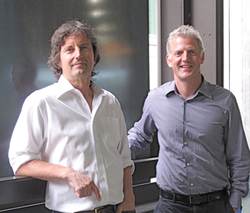 Photo by Clair Enlow
Tom Kundig and Chris Rogers
The Project of the Month is sponsored by the Daily Journal of Commerce and the Seattle chapter of the American Institute of Architects. The Project of the Month for October was selected with the assistance of architect Rick Mohler, developer James Mueller, and artist Nori Sato.For information about submitting projects, contact Isla McKetta at AIA Seattle at (206) 448-4938, or imcketta@aiaseattle.org.