Project of the Month: Kent's ShoWare Center is out of the box

Photo by Lara Swimmer [enlarge]
Unlike ‘black box’ arenas, ShoWare Center opens up through the entry and concourse. The top-level club area gets light and views, too.

They come for hockey, concerts and local graduation events. But when crowds start flowing into Kent's ShoWare Center, the first thing they see is — themselves. 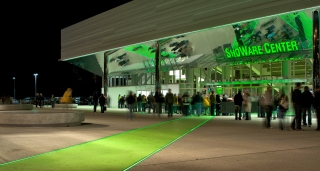 Photo by Lara Swimmer [enlarge]
At ShoWare Center, the show starts when visitors start gathering in the front plaza. Reflective soffits create interest from the nearby arterial.

Some stop in front to ham it up, taking pictures of their reflections overhead. Thanks to the angle of a prominent soffit clad in polished steel, those reflections flash all around, toward the street and the nearby shopping center. It's a kind of small-town Times Square — with dazzle and magic, minus the tall ads. This multi-use facility radiates energy that is literally multi-faceted. 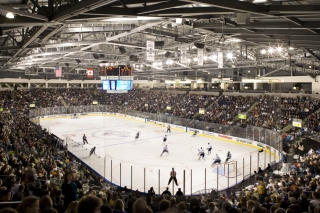 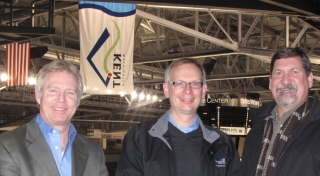 In a world where competition for national sports franchises has come to mean luxurious, ultra-specialized facilities, ShoWare Center deserves attention. It's a regional destination anchored by a hockey team, but it serves many other purposes. According to Ben Wolters, economic and community development director for Kent, it's the only place between Seattle and Tacoma where you can have a 1,000-plate dinner.

When Wolters and other city representatives found LMN Architects, they had the key ingredients of a great multi-use arena. They'd wooed Seattle Thunderbirds, a junior hockey team, away from too-large Key Arena. They had a city-owned site. And they'd cleared the way legally for the early selection of a general contractor, who would in turn collaborate with the architect to hold costs down from the beginning.

ShoWare is a division of Fresno, Calif.–based Vision One, Inc. With the multi-use arena, Kent and ShoWare have prospered in tandem. The city got an infusion of financing for its arena, plus long-term ticket-buying ease and lower ticket fees. ShoWare launched its flagship box office operations program. “ShoWare Center has helped us to market Kent, and build it as a regional destination,” said Wolters.

While it gets a lot of bang for the buck, LMN's design is outstanding for what it does not do. It doesn't insult its small town setting by dressing an arena like a library. Situated right next to state Route 167 and with a major shopping center down the street, it is just large enough for its anchor tenant's hockey games — plus up to 6,100 spectators — and no larger. (Configured for concerts, it can hold 7,800.)

LMN design partner Mark Reddington is straightforward about design and sustainability: “If you build less, you consume less.” Sustainable design and construction were also a high priority, and ShoWare Center is the first new-construction event center in the country to be certified LEED gold.

The design process began with the irreducible elements of the facility: the hockey rink and the seating bowl. Steel trusses were engineered for their low profile, which yielded a more intimate scale inside but also allowed the height of the walls to be trimmed around the building's perimeter, reducing the bulk. With the rink on grade, the perimeter concourse and concessions and services are tucked under the seating bowl.

One thing that could not be put into the box is the cars. A high water table meant that below-grade parking was not feasible, so ShoWare Center is surrounded on two sides and in back with pavement.

But even the parking lot works hard. An innovative natural drainage, filtration and landscaping system takes care of runoff. And then there are the “energy lines” — a jagged pattern of bright green painted lines radiating outward from the soffitted entrance. Those are reflected in soffits, along with the traffic and the crowds.

Unlike its cousins around the country, ShoWare Center is very open. “Buildings like this tend to be black boxes,” said Tom Burgess, LMN's project manager for ShoWare Center. That's because event promoters typically want complete control of the environment.

In Kent, the architects brought natural light into the perimeter, at two levels.

With locker rooms and offices in the back, ShoWare Center opens up the entry and concourse to daylight in front. A glass wall welcomes visitors and gives passers-by a glimpse of activity within the spacious lobby and concourse.

Thirty feet up on the second level, a series of aircraft hanger doors open up the southeast corner of the building and offer views of Kent Station and Mount Rainier. With the touch of a button, they flood a large club area with light. When they are closed and the inner curtains are open, attention goes back to the action on the arena floor.

The lower ceiling plus the full seating bowl gives ShoWare Center an intimacy that is unusual among similar-sized arenas. According to Tim Higgins, general manager of the facility for ShoWare, “You feel very close — there truly is no bad seat in the house.”

And for big parties and community events, the large floor can be used in many ways. The arena has seen trade shows, a popular job fair, and many local graduation programs.

Recreational Equipment, Inc. (REI) is one of Kent's largest employers. For its corporate party, half of the arena floor was covered with tables, said Higgins, and half with ice. With just a couple of steps, partiers went from schmoozing to skating and back.

From photo-ops to ice skating, ShoWare lives up to its tag line:

“Where you're part of the experience.”

“This building has a light, almost floating feel, thanks to the mirrored, inward sloping soffit/overhang and the bright colors."

“While the project is still very auto-oriented and surrounded by parking lots, the plaza along the primary street appears to allow a critical mass of people to gather, creating a civic presence in a pretty hostile environment. The folding window awnings at the second floor are a simple, but effective way to add visual interest as well as daylighting.”

The Project of the Month is sponsored by the Daily Journal of Commerce and the Seattle chapter of the American Institute of Architects. The Project of the Month for November was selected with the assistance of architect Sean Canady, architect Robert Miller, and consultant Ellen Southard.For information about submitting projects, contact Isla McKetta at AIA Seattle at (206) 448-4938, or imcketta@aiaseattle.org.