Even with a $270M makeover, will LA's aging coliseum be ready for the Big One? 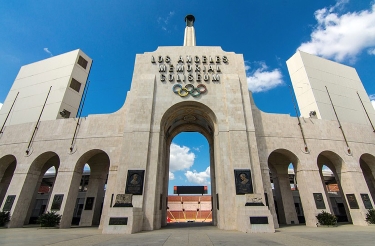 Photo from lacoliseum.com [enlarge]
The project would restore the iconic peristyle to more closely resemble the stadium’s original 1923 design.

LOS ANGELES — The Los Angeles Memorial Coliseum has seen almost a century of American history, hosting the first Super Bowl, the 1960 Democratic convention where John F. Kennedy was nominated and two Olympic Games, as well as concerts by Bruce Springsteen and the Rolling Stones.

No one disputes that the stadium that opened when Warren G. Harding was president is showing its age. But plans for extensive renovations leave a critical — and potentially costly — issue unresolved: How much work will be needed to harden the structure against earthquakes in time to make a credible bid for the 2024 Olympics?

The University of Southern California, which operates the bowl-shaped stadium, announced the $270 million makeover last month, promising to transform the landmark into a modern facility that would rival any arena in college sports, while also making it suitable for the 2024 games.

Those preliminary plans, however, offered no details about how a stadium that was badly damaged in a 1994 quake could be redesigned while making it strong enough to host a worldwide sporting event in one of the world's most earthquake-prone regions.

The committee steering the Olympic bid has said little on the issue. Asked by U.S. Olympic officials if a recent earthquake study was conducted at the coliseum and, if so, what it revealed, the LA committee said studies would be conducted by USC consultants, records show. A committee spokesman declined to comment further.

Southern California is crisscrossed with faults, and geologists are certain the region will be hit by a big earthquake at some point, probably in the next three decades.

According to research by the Southern California Earthquake Center, the downtown Los Angeles area where the coliseum stands faces additional risk because the surface of the earth is composed of a thick layer of sediment, sand and dirt that can amplify shaking during a temblor.

Shaking tends to be stronger at sites with softer surface layers, as opposed to hard rock.

Before dawn on Jan. 17, 1994, the Northridge earthquake cracked freeways and toppled buildings. When it was over, 72 people were dead and the Los Angeles region had sustained $25 billion in damage.

The coliseum, constructed long before modern building codes, was severely damaged, even though it was roughly 20 miles southeast of the quake's epicenter and the strongest shaking traveled away from the Coliseum, to the north.

Walkways buckled, the high arches above the entrance were deemed unsafe, columns cracked and the midsection seating area slipped from its supports and dropped 6 inches. A repair job on the stadium would take about $100 million, several times initial estimates.

Other faults, however, are closer to the stadium, including one snaking through Hollywood.

If another earthquake occurs, “any building that was damaged in ‘94 in downtown LA is a building that has problems,” said Lucy Jones, a U.S. Geological Survey seismologist. “It's a pretty high level of hazard, particularly compared to the rest of the country.”

“Northridge was not strong shaking at the coliseum,” Jones added. If any of several faults near downtown has a significant rupture “there will be much more shaking than they had in ‘94.”

USC's renovation plans call for constructing a towering, glass-walled structure within the bowl — like a building within a building — for luxury suites, premium seating and a new press box, capped by a viewing deck. The changes would reduce the stadium's capacity from 93,600 to 77,500.

Significant structural changes, and the weight that comes with them, can add stress in the event of strong ground shaking.

Nabih Youssef, a structural engineer who spearheaded coliseum repairs and strengthening after the 1994 damage and is working on USC's renovations, said studies are underway to identify earthquake hazards that will be incorporated into the design.

“There will be required, additional strengthening,” Youssef said, but the extent of the work will not be determined until after the research is complete.

The university and Youssef say the coliseum — the home of the Trojan football team — is safe in an earthquake, but questions have been raised about its strength and wear-and-tear since the 1994 repairs.

A priority: The consultants said the stadium should be reviewed thoroughly by experts for structural and earthquake issues.

According to the ISES report, the repairs undertaken in 1994 and 1995 were apparently limited to stabilization of “major structural damage.”

A visual inspection revealed that significant additional repairs are still needed “at primary structural components to assure the integrity of the facility,” the group found.

The earthquake review urged by the consultants was not produced in draft until September 2011, with an update the following March. The review work was conducted by Youssef's firm, the same company that worked on the upgrades after the 1994 earthquake.

Youssef said it concluded the main stadium bowl and press box were in compliance with current earthquake standards. However, privately run USC declined to release a copy of that report.

A follow-up ISES analysis in July 2011 recommended earthquake safety upgrades, including bracing any new lighting and piping and repairing “visible seismic damage” in the tunnel, while pointing to millions of dollars in other suggested fixes, from replacing fire alarms to repairing flaking concrete on the upper concourse.

In a brief statement, Lloyd Silberstein, USC's vice president for capital construction, said key work required at the coliseum is “substantially less” than outlined in the 2011 ISES report, but the statement did not provide specifics.

The university has said the stadium has not had substantial renovations in two decades, since repairs from the earthquake were completed. City building permits reviewed by The Associated Press give no indication that any extensive earthquake improvements were conducted after the 2006 inspection.

DLR Group provided master planning, architecture and interior design services, according to the architect's website. DLR states construction would begin after the 2017 USC football season and be completed for the 2019 football home opener. The team would play its 2018 season games in the stadium while it's being renovated.