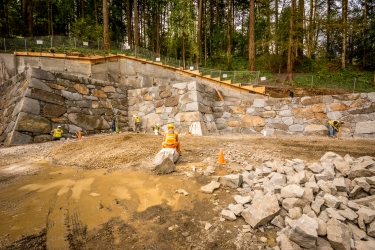 Standing alongside his construction workers and a giant Baker blue granite boulder, Uchiyama asked that “nature look kindly on our project for the safety of what we build and the people who build it.”

“Ordinarily we would also drink the sake,” he joked, “but with power equipment surrounding us that would not be a good idea.”

The project, a retaining wall called the Castle Wall at the Portland Japanese Garden, involved 1,000 tons of Eastern Oregon granite to build the 185-foot-long, 20-foot-tall wall. The first of its kind in North America, the wall required 3,400 labor hours to cut, chisel and stack the granite.

The Castle Wall idea had a modest beginning. 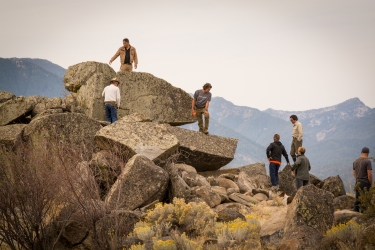 [enlarge]
Stones were hand-picked from the quarry. 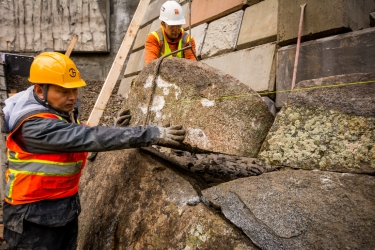 [enlarge]
Stones were wrapped with cables and lifted into place with excavators. Teams used ropes, poles and their hands to guide and set the stones. 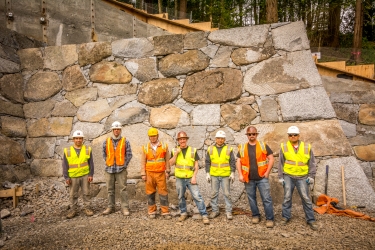 “We had been looking at building a standard retaining wall that was 25 feet tall,” said Stephen Bloom, the Portland Japanese Garden's chief executive officer. “Then we had an ‘aha' moment and said ‘Why not put up a castle wall?'”

The Castle Wall is part of the Japanese Garden's ongoing $33.5 million expansion, which is 70 percent complete and will open in April 2017.

Bloom said he conceived a master plan for the expansion in 2007, but with the economic crisis, plans had to be tabled for a few years.

Bloom used that time to consult with the garden's international advisory board and find the right team of designers, including Kuma and 15th-generation Japanese stone mason Suminori Awata.

“I have been learning this craft since I was very young,” Awata said. “My family has been stone masons for about 350 years. But I've never built anything this size.”

Uchiyama said the castle walls in Japan, as in Europe, were a symbol of power.

“The viewer would think of how much work and how many people it takes to build a wall of this size,” he said. “In Medieval times, that meant hundreds of skilled works and animals working for months. Only a great leader could have a wall like this.”

Uchiyama and Kuma wanted to use locally sourced materials, so they turned to Dan Dunn, owner of the Alpine Boulder Co. in Pendleton, Oregon. Dunn opened the quarry for Uchiyama and Awata to hand-pick each granite boulder.

“I listen to the boulders,” Awata said. “From the time I found them in the quarry to when I select them for final placement, they are always telling me where they want to go.”

Awata called upon a team of experts that included Matt Driscoll of O'Driscoll Stone in Petaluma, California; Kyle Schlagenhauf of Green Man Builders in Arcata, California; and Ed Lockett of Stone Sculptures in Vancouver.

From the Eastern Oregon quarry, the boulders were transported to Smith Rock in southeast Portland, where workers cut and shaped them — using drills, mallets and saws — in preparation for placement at the Castle Wall. More than 50 cornerstones were chosen to support the wall.

Awata first marked the cuts to the boulders with chalk. To split the boulders, workers used mason drills to create holes along the face of the rock and inserted metal bolts with mallets, gently tapping each bolt from one end of the boulder to the other.

Once the stones were fine-tuned and moved to the Japanese Garden, workers wrapped them with cables and lifted them with excavators. Teams used ropes, poles and their hands to guide and lower the stones. Awata then checked each stone for its alignment and balance.

As the project has progressed, Bloom has focused on fundraising. The Portland Japanese Garden has raised about $24 million toward its $33.5 million goal, with a majority coming from private donors, Bloom said.

Bloom makes about six trips a year to Japan, and has made a total of 63 trips there in his lifetime. Formerly the president of the Honolulu Symphony, Bloom joined the Japanese Garden as CEO 11 years ago and said his chief role is fundraising and marketing.

Bloom said a key to the success of the Portland Japanese Garden renovation was his decision to recruit Uchiyama in 2008. Uchiyama was born in Japan and studied landscape architecture at the University of Illinois at Urbana-Champaign.

“He has his heart in both places,” Bloom said of Uchiyama, referring to Japan and the U.S. “Somehow, it was always his calling to do Japanese gardens.”