It is always a momentous occasion when a building opens and we have the opportunity to witness the moment when the doors open, the audience sees it for the first time, and our design starts to breathe with life.

This weekend we will have this experience when the new Seattle Art Museum expansion opens to the public. Looking back on the last four plus years, it’s good to reflect on what made this project so unique. 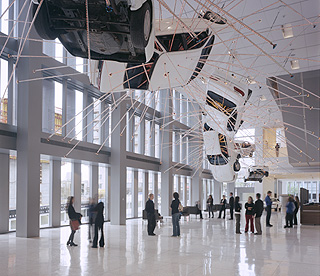 Photos by Richard Barnes
The 5,000-square-foot Brotman Forum, a free public space overlooking First Avenue, draws its energy from both the street and the activity inside.

Our most important task as architects for the museum was to make a place for art within the context of a large-scale development. When we began work on the new expansion in 2002, there were already a number of parties invested in the project, all working to create an innovative hybrid between public institution and private enterprise.

Collectively, our charge was to redefine an entire block of downtown Seattle to bring new life to the downtown core. Many of the variables were predetermined, but there were many unanswered questions: How to respond to, restore and integrate the existing Venturi, Scott Brown building while expressing the new spirit and energy of SAM? How to integrate structure and services with the new 42-story headquarters for Washington Mutual? How to give each component a distinct yet complementary character?

The nature of the partnership created one of the biggest challenges we had to face — the phased growth of the museum within the building over a 20-year period and the need to provide flexible workspace for Washington Mutual in the interim. We felt it was essential that the entire building be seen as one entity when viewed from First Avenue, and we knew that the identity of the museum would be linked inextricably with the perception of the whole from the street. We devoted a lot of energy researching and testing design strategies that would unify the building, while accounting for the vastly different (almost opposing) demands on the spaces within.

As much as we focused on finding the proper expression within the context of the development, we wanted to define the museum’s place within the city and the region, both in terms of the immediate conditions of the site, and in terms of the building’s relationship to SAM’s other venues — the Olympic Sculpture Park and Asian Art Museum — as well as the places and experiences that give Seattle its unique identity.

The new entrance on First and Union is a good example. Originally planned to be sited mid-block, we moved it to the corner for a number of reasons.

First, it helped open the entire street to the public, much in the same way the original Venturi building was intended to do along University. This vision of a continuous public space is now a reality given the reconfigured access to the galleries.

Second, it brought the main public entrance as close as possible to the art, and finally, the entrance not only looks out to First Avenue, but along it, making a connection with Pike Place and the Sculpture Park beyond. 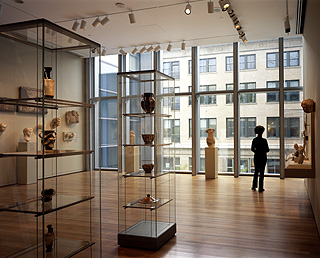 SAM’s expansion was designed to take advantage of the site, with gaps in the curtain wall that overlook the city and Elliott Bay. North-facing rooms, such as the Ancient Mediterranean and Islamic Art Galleries, have floor-to-ceiling glass.

Few places in the city afford the public the chance to move from the street to a genuine, elevated civic space.

A few steps above the entrance, the Brotman Forum is both an introduction to SAM’s collection and a room in the city that draws upon the differing energies of museum and street. On the upper gallery levels, we emphasized connections to the art, the institution, the city, and the landscape beyond.

One of the biggest challenges was the problem of orienting the visitor inside a vertical art museum (a building typology that is still somewhat rare). We didn’t want to make a museum where your orientation point is the elevator. Rather, we wanted it to be a spatial experience, where visitors take cues from the space as they move through.

To accomplish this, we had to get a mix of gallery heights within the constraints set by the development. Our solution was to make interlocking double-height galleries.

That makes the vertical museum into a single spatial experience, linking single- and double-height galleries and setting a pattern for future growth.

SAM’s collection is extraordinary for its breadth and depth; it spans cultures, continents and centuries. So, it was important to us that we provide the curators with a whole range of possibilities, not only of gallery heights and sizes but of lighting conditions. We also wanted to take advantage of the site and the amazing light and atmosphere along Elliott Bay.

So we broke apart the building’s curtain walls and treated them like four shells that pinwheel around. Each shell receives and modifies the light in a different way, and the gaps between the shells let you look out onto different views of the city and the landscape.

Ultimately the challenge was to take all of these factors, ideas and aspirations, and bring them together in a single, compelling act of architecture. At the same time, it was an open-ended proposition. The city, the art, the landscape are always changing. We wanted to create a space where the qualities of each could be experienced and shared, a space that will serve the museum and the city for generations to come.

Brad Cloepfil is the founder and principal of Allied Works Architecture.