Expansion arose from an unlikely partnership 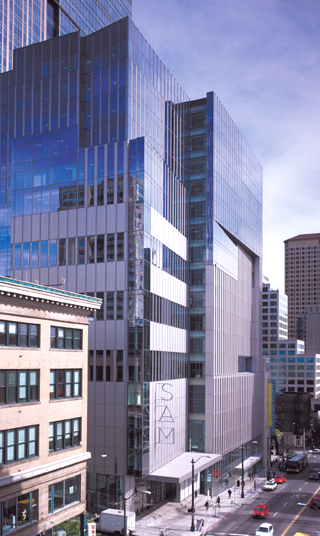 Photo by Richard Barnes
Seattle Art Museum’s development with Washington Mutual included a 42-story office tower, an underground parking garage and a 16-story museum tower, shown here. SAM currently occupies the first four of its 12 floors in the tower and leases the rest to WaMu. The bank owns the top four floors.

Over the past decade, Seattle Art Museum has transformed itself with the sort of bold, forward-thinking vision that is usually reserved only for businesses.

With the reopening of the downtown site on May 5, SAM becomes one museum with three sites, a radical departure for most cultural institutions.

The downtown project brought together an unlikely pair, Washington Mutual and the Seattle Art Museum.

The museum had concluded from a 1999 study that it would need 300,000 additional square feet to accommodate future growth. But the study was set aside until an unexpected call was received that would mark the beginning of an unusual partnership.

Early in the decade, WaMu sought a site for its new corporate headquarters that would consolidate its operations in Seattle. The site it wanted was owned by SAM and not for sale.

SAM had acquired the full city block bounded by First and Second avenues and Union and University streets in anticipation of expanding someday. On the south portion of the site was the downtown museum, built in 1991. To the north was the Arcade Building, a nine-story building that wasn’t fully occupied.

The partnership that unfolded was highly favorable to both WaMu, which had found a place for its headquarters in Seattle, and SAM, which could begin to realize its long-term goals immediately.

The co-development that resulted was divided into three condominiums upon completion — a 42-story office tower, an underground parking garage and a 450,000-square-foot museum tower. Initially, SAM would occupy four of its 16 floors, adding approximately 118,000 square feet. WaMu would lease SAM’s eight remaining floors for the next 10 to 25 years to offset the cost of the additional space. (WaMu owns the top four floors.)

The ingenuity of this collaboration lies not only in what it adds to SAM’s square footage, but in the opportunity it presents for the growth of its audience, collection and sustainability as an institution. Over the next two decades, SAM can expand into the upper floors as finances allow and demand for space increases.

In the early planning stages, SAM set forth its programmatic goals — to create an accessible civic gathering space, grow as a community resource, connect with the city and landscape, and create flexible space to accommodate a wide variety of art.

The result is an expanded museum (nearly 70 percent more gallery space) that is opened up both literally and figuratively. The new building is architecturally distinct from the old, yet seamlessly connected inside, with a variety of gallery spaces that accommodate the art and visitors.

The project is not only a milestone for the museum, but contributes to the economic and cultural vibrancy of the downtown core.

SAM’s move downtown in 1991 spurred the development of the surrounding blocks, including Benaroya Hall and Harbor Steps. The expansion of the museum and construction of WaMu’s headquarters has been a catalyst for further development. Most noticeable is the new Four Seasons Hotel and Residences, which is currently under construction directly across First Avenue.

The improbable partnership was not without its challenges. The first was timing. The museum had already committed to the construction of the Olympic Sculpture Park, and was planning updates to its Volunteer Park site. As daunting as it seemed, the board voted to proceed with the WaMu partnership.

The second challenge was the schedule. A museum typically takes 10-12 years to plan and execute a project such as the downtown expansion. A museum expansion is a one-of-a-kind project that depends on the site, collection, design ambitions and institutional mission. However, the schedule demanded the project be completed in less than half that time.

There were design challenges. The programmatic requirements of a bank and museum are as different as their business models.

How would each retain its own identity? How would the city view the building from a code standpoint? How could the space be built for a museum, yet serve as Class A office space in the interim?

With the leasing arrangement, there were really multiple designs to be considered concurrently: the shell and core of the museum and bank, their respective tenant improvements, the museum’s leased space (which would serve as office space before becoming museum space later), and the renovation of the existing museum.

Operationally, the museum had its own challenges, including the closure of the downtown site during construction, the maintenance of membership during the closure, and the adjustment to its role as a condo owner and landlord in the development.

At times the complexities seemed to exceed expectations from permitting, design and contractual agreements, yet the project team and staff met the challenges. The successful partnership between the art museum and the bank that resulted should serve to inspire future civic/corporate co-development.

Now as the museum prepares to open, an artwork that features nine Ford Tauruses has been suspended from the lobby ceiling as if tumbling through the air. The piece, by Chinese artist Cao Guo Qiang, is called “Inopportune Stage 1.” Innovative and transformative, complex and bold, the Seattle Art Museum expansion has been anything but “inopportune.”

Jan Hurley is the project director for the Seattle Art Museum’s downtown expansion.