This June the waters of Lake Sammamish will see sailboats, Jet Skis and a fleet of unconventional watercraft — concrete canoes.

The University of Washington will host the American Society of Civil Engineers’ 20th Annual National Concrete Canoe Competition, welcoming collegiate teams from all over the country to compete in a unique event that combines science and technology with athleticism and technical expertise.

“Most people think of sidewalks and buildings when they think of concrete — they definitely don’t think of it floating,” said Melana Foster, the 2006 University of Washington canoe captain.

Concrete canoe races have been around since the 1970s, when just a few schools built mammoth canoes reinforced with steel rebar that weighed in at more than 600 pounds.

In 1983, professor Dierdre Meldrum was on the UW’s concrete canoe team in Houston for one of the first nationally organized competitions.

“In our region, we were required to use natural materials to build our canoe. The Houston-area teams had different rules and were allowed to use new space age materials — they had a canoe that was shorter and only 100 pounds,” said Meldrum.

Today, more than 200 schools compete in one of 18 regional events in order to qualify for the nationals.

The canoes have also come a long way over the years, now reinforced with Kevlar mesh and other high-tech fabrics, weighing in around 185 pounds or less, and constructed of concrete that is less dense than water.

The material has to be less dense than water to float, which is a requirement in the competition. The rule of buoyancy is that anything that weighs less than the water it displaces will float. In Washington, the massive floating bridges used to transport thousands of commuters daily are also comprised of concrete and are built with hollow chambers that act like the hull of a ship.

Standard construction materials are replaced as much as possible with less dense binding materials and rock, such as cenospheres, micro-balloons and perlite.

The mix design rules are changed every year so the teams are always developing newer and more exotic mixes as well as experimenting with different materials.

Designing and testing the concrete mix is just one of the many elements to the intense preparation for canoe teams heading to the nationals. 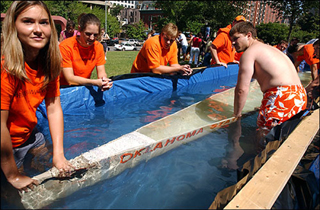 Photo courtesy of ASCE press room photo gallery
Oklahoma State University’s team performs a swamp test at the 2004 nationals. The test assures the canoe can float and be paddled in the races.

“Actually building the canoe is only part of the competition, there is also a ton of time that goes into the academic/professional side: designing the hull, fundraising, writing the design paper, the display and preparing the technical presentation,” said Jennifer Kipp, 1998-99 UW concrete canoe team co-captain.

Participating students are judged on all of the above in addition to the races.

“If you want to win, both the canoe construction and your training matter … you have to be pretty athletic, but it’s more important to have good technique — it takes a lot of practice time on the water,” Kipp said. 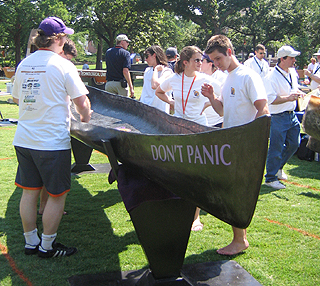 Photo courtesy of UW Civil Engineering department
Last year’s UW concrete canoe team competed in the nationals in Oklahoma with the boat Don’t Panic. The team was 12th out of 23 schools.

This is the first time this event has ever been hosted in the Pacific Northwest, and our unique weather may play a role in who is victorious.

“The weather in Seattle is never predictable and it can change in an instant. The UW takes advantage of this fact in that our teams practice year-round and in all kinds of weather,” said Kristina Lowthian , a 2006 UW concrete canoe team member.

The winners will take home scholarships, memories and the achievement of championing what has been called civil engineering’s America’s Cup.

“At the end of the day, it’s important to realize that it’s not about the canoe,” said Eric O’Brien, a civil engineer and former concrete canoe co-captain. “It’s about being given a seemingly impossible task, and not just being able to accomplish it (that’s what engineers do every day), but also being able to explain it to people so that they can either build it themselves or use the knowledge to build something even better.”

Jennifer Sandberg is a part of the Public Affairs division of communications consulting firm PRR Inc. She works as a project coordinator for the Washington State Department of Transportation’s I-405 Corridor Program and volunteers her public relations services to the Seattle Chapter of the American Society for Civil Engineers.