Tower design breaks out of the box 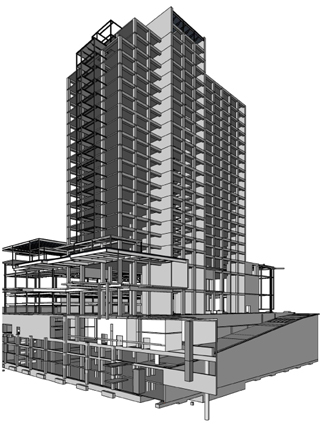 Images courtesy of Cary Kopczynski & Co.
Through the use of building information modeling, structural designers for the new Hyatt Regency tower in Bellevue are able to accurately model the structural performance under a variety of load combinations.

Recent advancements in technology have radically affected the design and construction of high-rise concrete residential towers. With the advent of new modeling software, high-performance concrete and advanced forming systems, designers and builders are able to create structures that are more efficient and useful than those built just 10 years ago.

Today, things are different. Three-dimensional software allows us to build a virtual mock-up of slabs, columns and other elements, and apply loads to the building to determine its behavior. Finite element modeling software — similar to that used by airplane manufacturers — lets designers assign properties to specific pieces of the structure. By calculating the combined behavior of the pieces, designers are given precise values and coordinates which help guide slab thickness, steel placement and other critical design items. No longer must structural systems be over-designed to satisfy the unknown.

This new technology has been used in the design of Escala, an 820,000-square-foot, 31-story condominium tower under construction in downtown Seattle. In the past, limited seismic design capabilities often dictated boxy exteriors and large concrete cores in condo towers. Escala’s designers used technology to essentially think outside of the “box.” By modeling numerous different structural systems, designers were able to create a seismic system without jeopardizing the tower’s efficiency or buildability. The building is irregularly shaped with offset elevator cores and stair towers; a design that would have been difficult to analyze even 10 years ago. With programs that enable designers to virtually test numerous scenarios with little more than the press of a button, many more options are becoming available.

Block 51 — a 400-foot-tall condo tower planned for Seattle’s South Lake Union neighborhood in 2008 — also relies on high-tech modeling systems to use forward-thinking concrete designs. Engineers have been able to eliminate a ring of internal columns in the structure that would have otherwise been necessary. By using modeling software to calculate slab strength and deflection, designers have thickened the concrete slabs at the core, precluding the need for these added columns. This allows post-tensioned floors to span from the core to the exterior without additional internal support, offering more interior design options and eliminating lower level transfer beams.

Advanced computer-aided modeling systems have also given designers the confidence to practice performance-based design instead of following prescriptive building code requirements, some of which were put in place before the advent of recent technology. While building codes serve as a benchmark for responsible building design, they aren’t set in stone. Often, code requirements can be fulfilled with an alternative method meeting the original provision’s intent.

Through detailed seismic analyses of various structural options, Block 51 designers have shown that the tower can be built with shear walls in lieu of ductile frames — even though Seattle’s building code requires ductile frames in towers taller than 240 feet. The structure will still meet the intent of the code, but it will now be quicker and easier to build and provide more architectural design flexibility; resulting in a better, more efficient building.

Column-hung forming systems, for example, use the structure’s columns instead of the floor below to support slab formwork. This lessens the chance of early-age overload and also eliminates the web of re-shoring in the lower floors so mechanical, electrical and finish trades can start their work earlier.

Concrete itself has seen many improvements in recent years. Twenty years ago, concrete with a compressive strength of 6,000 psi was considered high strength. Today, it’s common to see concrete strengths of 10,000 and 12,000 psi in taller buildings.

Concrete has become stronger through the use of additive materials such as pozzolans, which, when combined with cement, exhibit cementitious properties. Also, water-reducing admixtures increase a concrete’s slump; improving its workability without the addition of water, which can weaken concrete. Higher strength concrete means columns and walls can be reduced in size; saving money, manpower and interior space.

Cary Kopczynski, P.E., S.E., FACI, is president and senior principal of Bellevue-based structural engineering firm Cary Kopczynski & Co. Kopczynski is one of a select group of industry professionals from around the U.S. to sit on Committee 318, Standard Building Code, of the American Concrete Institute.