In the mid-1990s, Henry Liebman, founder of the real-estate development company American Life, asked me to participate in the redevelopment of the Sodo neighborhood. We agreed to preserve what we could and build new where and when appropriate. My company would be responsible for the rehabilitation of the old industrial buildings and warehouse-type structures owned by American Life.

Each of the projects required engineered and buildable solutions to enhance the original character of the buildings while making them safe and comfortable for new uses. We also had to navigate our way through major building and energy code changes.

The Sodo buildings have a certain historical value, but were not intended to be monuments. Many would look at the structures and knock them down to build new, yet there is much that can be done to preserve the historical vein of the area. My approach is one that conserves resources, honors history and invites progress.

Working in the area presents more challenges than typical renovation projects. The unique character of the area consists of a mixed population of industrial blue-collar and office workers from the Starbucks Center, Seattle School Board, Allrecipies.com, PSL Industries and the Port of Seattle, to name a few. An entertainment environment is represented by several nightclub and performance venues. Add to the mix the numerous truckers who serve the port. 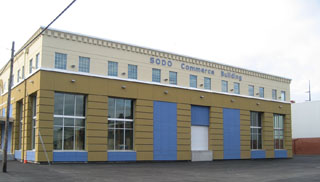 The mix is also an opportunity to gain insight from many perspectives and use many different peoples’ strengths.

Then there are the buildings themselves.

The story of each of the buildings would not be complete without mentioning the major structural contractors involved in their transformation. The relationships with these specialists created techniques and processes that enabled the rehabilitation to evolve over the last few years. Together, we’ve collaborated on and completed some very difficult assignments.

I contracted first with Mehrer Drywall Co., a recognized leader in the light-gauge-steel stud and drywall industry. Mehrer’s involvement with the Northwest Wall and Ceiling Bureau, a trade group setting standards and practices for its specialty, gave Mehrer the expertise to help with buildable solutions.

Another crucial partner in the process was Industrial Resources Inc. Its specialty in the field of heavy-steel fabrication and installation is especially suited for these types of buildings. IRI’s work in the fishing boat and refinery industries provides it with extensive experience in environments that are neither square nor plumb. IRI also was adept at making and erecting steel structures in a wood environment without burning the structures down.

In the past few years, we have completed several projects of particular interest in an area of Sodo that I like to refer to as the “Village in Sodo.” This area is located around the intersection of First Avenue South and South Hanford Street.

The first project, at 2962 First Ave. S., was affectionately called “The Shack.” Today, the name shares a small space alongside Renewal by Anderson and is accentuated with raised letters on the southern facade of the building. This old mill building was literally falling down: A failed renovation project by prior owners had exacerbated the building’s condition to give it the appearance of a rundown shack.

The Shack underwent a very slow and arduous repair process after its exterior skin was carefully peeled away and shoring was installed. 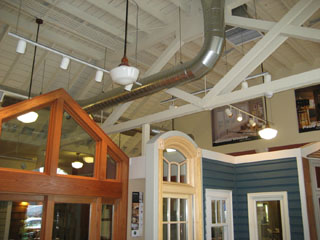 [enlarge]
A dilapidated building known as The Shack is now home to window company Renewal by Anderson.

The building at 2944 First Ave. S. closely followed renovation of The Shack. Built in 1918 as a casting foundry building for American Foundry Co., it was later occupied by Gorlick Muffler Co. and modified in the 1970s. It needed either a major overhaul or to be dismantled to salvage the heavy wood timbers.

In 2006, working with the engineering firm of Lance Herlocker and Associates and the architectural firm of Robert Stasny, we formulated an ambitious structural retrofit and architectural redesign that allowed for the main entrances to be located on the First Avenue side of the building.

After careful removal of all hazardous materials by Environmental Waste Resources, a division of Nuprecon, IRI was brought in to install engineered steel tie plates, which it made specifically to fit the building. The plates were bolted onto the heavy wood timbers to create structural ties, and then Nuprecon’s demolition team removed and recycled the unwanted interior partitions, exterior skin and a second floor level.

The following year, we began the building at 66 S. Hanford St. A 1938 heavy-timber-framed structure, it was originally built for a paper-recycling factory. The challenge was similar but with the added dimension of a partial basement that would require a substantial amount of work.

The frame of this structure sat upon a grid of driven wood piles with a concrete pile cap. Herlocker recommended that these piles be connected together with horizontal heavy-steel straps and concrete grade beams. Again, with the hazardous materials removed, IRI made hardware and installed additional connections to the heavy-timber joints.

To accomplish the goals of constructing additional horizontal ties, two specialty contractors were brought in: LeValle Vacuum excavated the sandy silt that was required for the trenches to accommodate the new grade beams; and Case Construction formed and poured the new concrete beams and other major structural wood work.

Crews made and installed additional custom steel plates to reinforce deteriorated wood beams inside the building. Mehrer Drywall then erected the light-gauge-steel stud and plywood-framed shear walls. The work was finished with a dryvit system applied to the exterior by JJ Jefferson Co. The building, now named Sodo Commerce Building, is available for lease and is suitable for both office and light-industrial uses.

Most recently, we completed the revitalization of the Ederer Crane complex on First Avenue South. This is a group of five buildings that were used by the Ederer Crane Co. to build specialty cranes, bridge cranes, crane equipment and heavy-material handling equipment. This reconstruction of heavy-timber-frame buildings was accomplished by the same group of specialized contractors dedicated to giving new life to the historical past that created the Sodo district.

James Dillon, founder of Dillon Design and Construction, has a master’s degree in architecture from Carnegie Mellon University and a bachelor’s degree in environmental design from the Philadelphia College of Art. Over the last 35 years, Dillon has been redesigning and extending the useful life of a variety of commercial and residential structures.